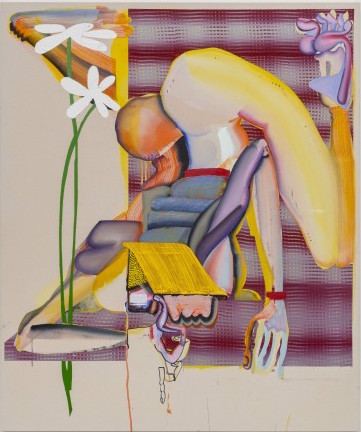 Christina Quarles’ work is concerned with the female body. Not so much what it looks like, but what it feels like to inhabit it. She makes images in which the body is fragmented, distorted, stretched out of shape, occupying impossible spaces and sliding through dimensions and time. The resulting images have something of a collaged look and are somewhat otherworldly, they retain enough reference to reality however to suggest bodily and sexual encounters that question gender and identity. As a lesbian who is black but often mistaken for white, Quarles paints self-referentially. There is a strong sensual nature to the work, giving it an air of neo-surrealism.