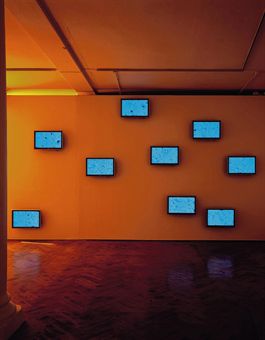 A pioneer of video and film installations for over a decade, Diana Thater’s works explore the nature and possibilities of moving-image media. Thater describes her work as “Neo-Structualist Installations” that aim to make viewers look anew at architectural environments and the way they perceive video and film. The natural world has been a recurring motif in Thater’s work since the early 1990s, and she brings the outdoors into the gallery to address the relationship between modern technology and notions of beauty and the sublime. Thater inverts the idea of the technological sublime, insisting that the presence of technology makes the natural sublime stand out more starkly.