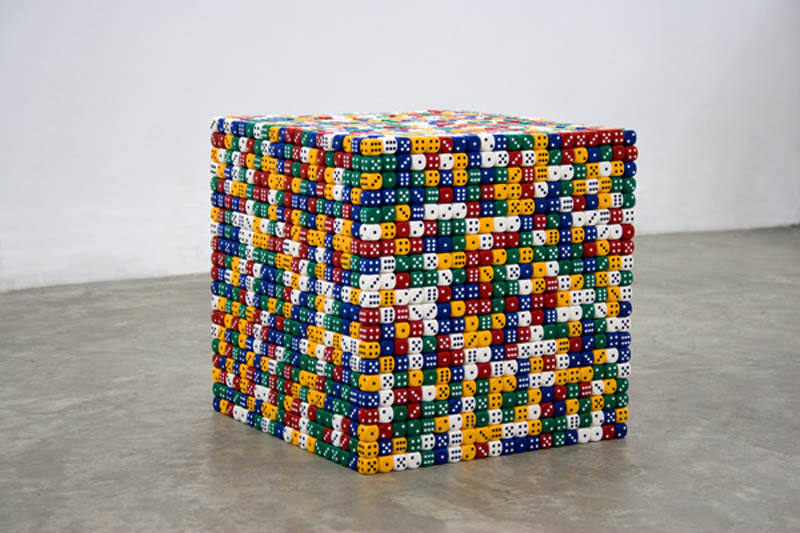 Evariste Richer constantly invents new standards for measurement which are mostly objects to prompt the spectator’s potential investigations: avalanche probes, a meter drawn from memory, a meter with no measurements… Meteorology, science, magic, mineralogy, photography, optics are his preferred terrains. The artist reveals meaning through displacements, changes of state such as the physical occurrence of sublimation (matter transforming from solid to gas). In Ecran (Screen, 2008), the weave of a projection screen is blown-up full-scale and takes over the entire room. Evariste Richer makes visible these micro perforations which are usually hidden by the film being projected; he reveals the infra small and ghostly. Blow up (2003), a tennis ball which has been turned in on itself, could stand as an allegory for sedimentation and concatenation. The concentration of meaning and gesture produces the artwork. The constant shifting between the cosmic and the infra small brings together knowledge and observation, certainties and the poetry of art. A piece from a meteorite can become a dice (Médéorite,  2008), a dice turning at high speed can become an illustration of the energy principle (Le grêlon noir/The Black Hailstone, 2008). Crystallisation – which was defined by Stendhal as feelings born in the imagination that become attached to an object to transfigure it – is the base of Richer’s work.
Evariste Richer was born in 1969 in Montpellier, France. He lives and works in Paris.