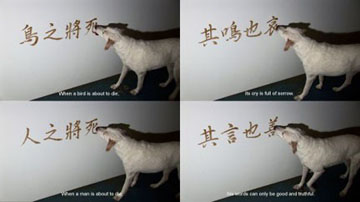 Excerpts from the Analects of Confucius
Hung-Chin Peng

There is a palpable urgency in the work of Taiwan-based Peng Hung-Chih, who uses video, sculpture, installation, and painting as means to criticize society. As the artist states: “art should be a tool of propaganda, a tool to awaken the collective conscience. This is the only choice under very pressing conditions.” Characterized by a wry and intelligent humour, the cultural commentary relayed by his works has both local universal reach: from aspects of China’s political past and present, to problems of racial and ethnic identity, collective history, spirituality and even our thwarted relationship with the natural world. Several of his works speak of our inability to see outside of our own perspective, as part of a religious or cultural groups, or even as a species. His well-known series Face to Face, for example, consists of sculptures of dogs with small monitors where viewers can watch footage shot from a canine perspective, and his piece The Deluge – Noah’s Ark, a monumental eight-metre-long sinking cruise-ship assembled from over 8,000 3D printed parts, foregrounds the anthropocene. From small gestures to gargantuan statements, Peng Hung-Chih’s works are a timely meditation of the inescapable follies that bind humanity together.

Biography
Born 1969
Collection Artworks
Excerpts from the Analects of Confucius