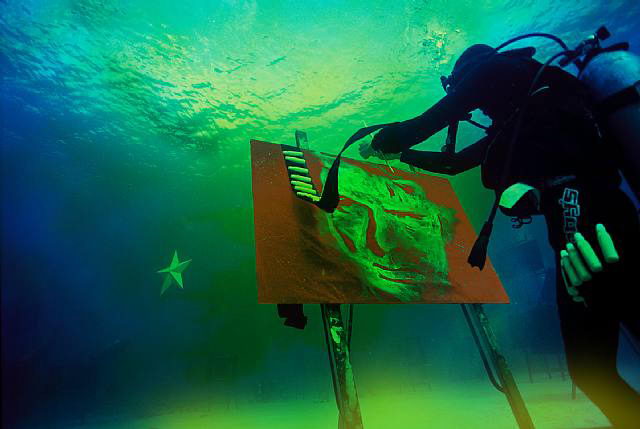 Jun Nguyen-Hatsushiba initially trained as a painter in the United States and references to the act of paint easel painting and are regularly present in his videos. Since 2001, he is world renowned for his series of underwater videos, called “Memorial Project”, which revisit the history and culture of Vietnam, and its relations with the United States. Although the actual filming has an actual dangerous side for the artist and the actors, as a direct connection with Vietnamese boat people, they have a certain dream-like quality due to the slow motion in the liquid environment. typical national tropes which are integrated count rickshaws, rice picking, water puppets and dragons, the yellow star on the flag but these are generally intermingled and confused by overriding American cultural references. Through running performances across cities around the world, titled Breathing is Free: 12,756.3, Jun Nguyen-Hatsushiba pursues his humanistic artistic action denouncing global refugee crisis. His practice also includes drawing and large scale installations.
Jun Nguyen-Hatsushiba, who was born in Japan in 1968, was educated in the United States and now lives and works in Ho Chi Minh City, formerly Saigon.