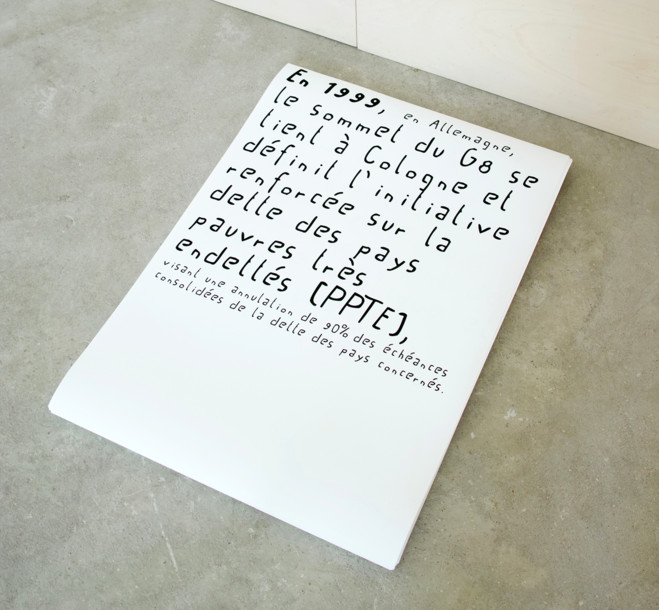 Through a conceptual approach, Matthieu Saladin (born in 1978 in France) develops his practice around an exploration of how contemporary economic mechanisms shape social relations and subjectivities. Using sound, print, performance, object and information technologies, Saladin proceeds by accumulation, displacement, diversion and tautology, pushing logic to the limit and interfering with the functioning of devices and structures to whose solicit it.
His exhibition The Promise of Debt (Salle Principale gallery, Paris, 2016) was developed around a reflection on the issue of debt taking place in a significant economic context: the post subprime crisis in the United States, and the threat in Europe of defaulting on sovereign debt. However, rather than dwelling on these situations, the artist prefers to probe the philosophical underpinnings of debt, a moral contract that conditions our social relations since the dawn of time. Who gives? Who takes it? Who is lending? Who’s right? Following the Italian sociologist and philosopher Maurizio Lazzarato in his analysis of neoliberalism as a ‘mankind of indebtedness,’ the artist insists on this unbalanced form of social relation, a tool of power of a creditor over a debtor, which acts on the subjectivity of the latter by imposing on him a morality and by mortgaging his future.