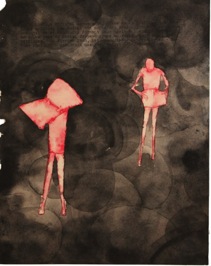 Naresh Kumar (b. 1988, India) is interested in the performance of the mundane in everyday life and considering how it can be represented in art. Often, his drawings act as scripts to his performances. With a focus on migration, the artist negotiates spaces of harmony, disparity and conformity within a city to understand the individual in the masses. Kumar’s experience migrating to the city of Patna, in India’s eastern state Bihar where he studied at the Patna College of Arts & Crafts, then to the city of Agra, where he was faced with his existence in a provincial art college, to Delhi where encountered his own identity as an migrant to the city from an impoverished part of India and lastly to Paris, where Indian culture is pocketed in certain areas of the city. The artist discusses the recurring act of movement as it relates to migration by incorporating performances to installations allowing the gaze to be performed by the artist himself and the spectator.