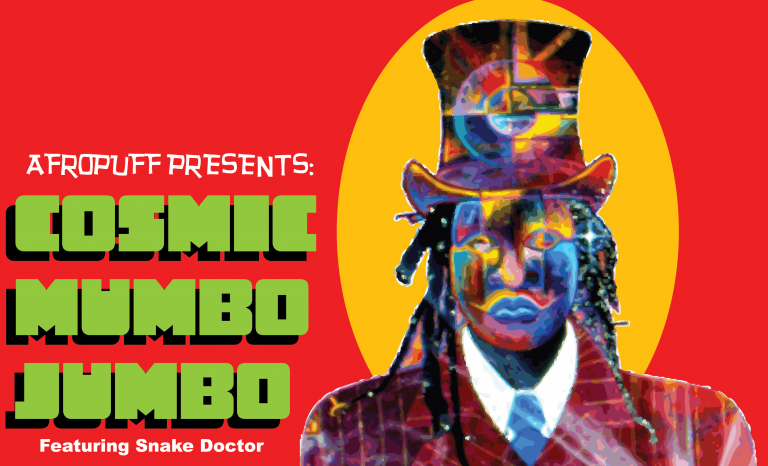 “I had no systematic way of learning but proceeded like a quilt maker, a patch of knowledge here a patch there but lovingly knitted. I would hungrily devour the intellectual scraps and leftovers of the learned.”
— Ishmael Reed, Mumbo Jumbo

Cosmic Mumbo Jumbo was a public access television show that aired in Los Angeles from 1997-2007. Produced by Adah Glenn (AfroPuff productions) at Time Warner Access Studios in Marina Del Rey and Hollywood, the show featured the radical musings of SnakeDoctor, an artist and philosopher based in the historically Black arts community of Leimert Park. The episodes, which totaled in seventeen, often featured SnakeDoctor in his signature top hat either flanked between his paintings of astral Black bodies swirling in adinkra symbols or pacing in front of a greenscreen mimicking the schizophrenic output of a news cycle.

Public access television, which was established by the Federal Communications Commission in the 1970’s, provided a unique space of uninterrupted mass media that was created by and for local citizens around the country. SnakeDoctor utilized this platform to critique and speak on a range of topics including self-help and transformation tips, the state of Black capitalism, how to embrace the calling of being an artist, and conspiracy theories regarding politicians being replaced by aliens.

In the online program, segments of various episodes are tethered together by the animated works of artists Danielle Dean and Dineo Seshee Bopape, who employ strategies of collage and sonic interventions to comment on mental frameworks, the origins of capitalism, and object-oriented ontology. Their works act as stand-ins for commercial breaks, whose textured advertisements become ambiguous, mimicking a digital scroll of images that hide political gestures in their visual folds.

Danielle Dean’s hand-drawn animation, True Red (2016), features an amorphous red and black shoe modeled after what was marketed as the “Vampire sneaker,” released in 2003 by Nike. True Red is a part of a larger project called True Red Ruin that traces the origins of capitalism and objecthood to sites such as Elmina Castle, which was erected by the Portuguese in present-day Ghana and was a pivotal stop in the Trans-Atlantic slave trade. In the piece, The Vampire sneaker oozes of blood and oil as it shapeshifts into various objects including a castle, a Black power fist, and even a Chinese factory worker to consider the various levels of exploitation that major corporations engage in.

Dineo Seshee Bopape’s video, why do you call me when you know i can’t answer the phone (2012), named after the chorus in Joan Armatrading’s love song, The Weakness in Me, features a kaleidoscopic loop of objects ranging from scientific instruments, trashcans, rotary telephones, clocks, clipboards, and a whole host of animals. The piece begins with a large, white egg that fills the screen until it is met with a sonic rupture that produces a globe from the egg’s core, prominently featuring the continent of Africa. Bopape, whose larger practice also includes sculpture, installation, and multimedia filled environments, created this video in part as a way to respond to her father’s onset of Alzheimers and to emphasize the nonsensical relationship of language and images.

Cosmic Mumbo Jumbo presents a landscape of moving images housed in both the pursuit and historical underpinnings of the African Diaspora through various formats. The overall meditative quality of the program builds a bridge between SnakeDoctor’s lengthy monologues and the cyclic visuals of Dean and Bopape to invoke the loop, the remix, and the inherent rhythmic nature of an interconnected experience.

About the curator
Erin Christovale is co-founder of the experimental film program, Black Radical Imagination, and Associate Curator at the Hammer Museum in Los Angeles.