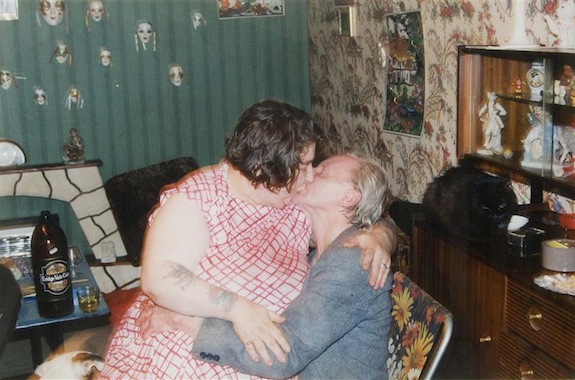 “All happy families are alike; each unhappy family is unhappy in its own way.” (Leo Tolstoy, Anna Karenina)

The artists in this exhibition look deeply into problems besetting the contemporary family. In each case, a family is physically or emotionally torn. Perhaps the intact, happy family has always been an unrealistic ideal achievable only in anodyne 1950s TV sitcoms. However, the happy home based on traditional assumptions seems increasingly fantastical and “family values” as such are not only being called into question, but the very phrase is now code for regressive politics. Richard Billingham records with unflinching honesty his own severely dysfunctional family in Fishtank (1998). In Pork and Milk (2004) French artist Valérie Mréjen interviews young Israelis who have abandoned their ultra-orthodox families in order to lead secular lives, whereas the separation of mother and child in Mona Hatoum’s video Measures of Distance (1989) is a result of the 1975 Lebanese civil war. The Russian collective Chto Delat’s comical A Border Musical (2013) reveals differing cultural expectations of family life, while Untitled (2009) by Israeli-born artist Keren Cytter features a backstage rehearsal that ends in a violent act against a family member. Ryan Trecartin, in one of his earliest videos Kitchen Girl (2001), takes maternal frustration to hysterical extremes. Two evening screenings continue the theme: Continuity (2012) by Berlin-based artist Omer Fast deals with the psychological ravages of war, while French artist Sophie Calle and Greg Shephard recount a failed attempt at a lasting relationship in Double-Blind (1992).

Opening reception 5:30pm-9:30pm, event and one-time screening of Continuity (2012) by Omer Fast at 8pm followed by a conversation with Steve Seid, Video Curator at the University of California, Berkeley Art Museum and Pacific Film Archive.