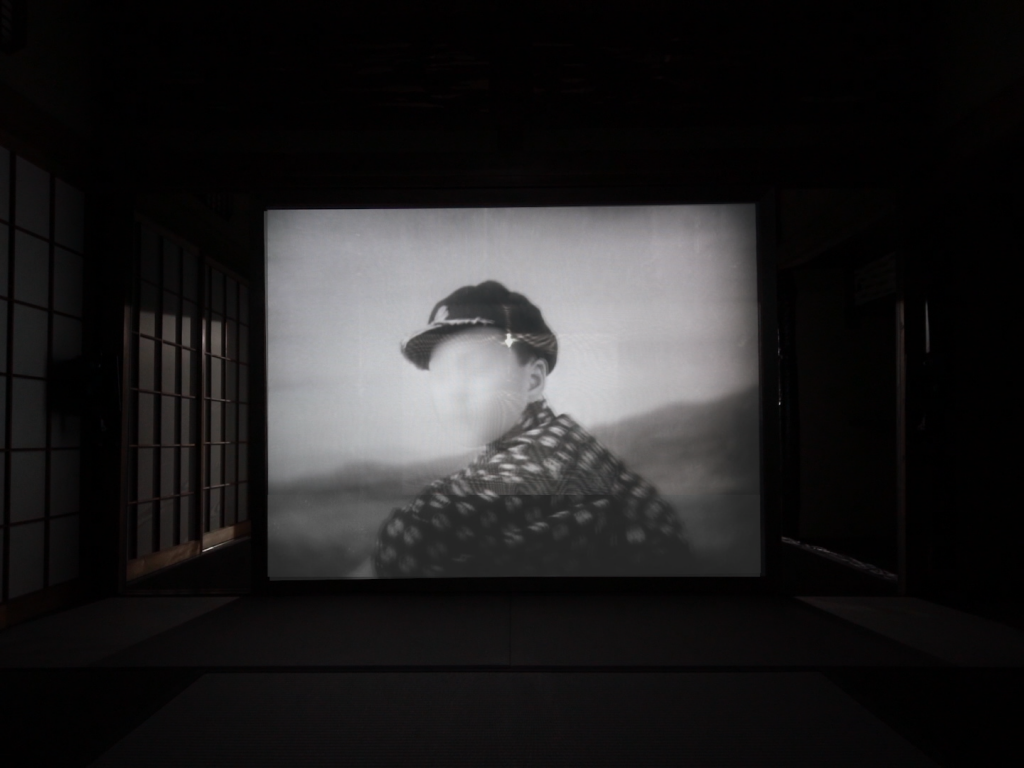 Parallel to the exhibition at the Times Museum in Guangzhou, the online video exhibition begins with Ho Tzu Nyen’s work The Void, which is excerpted from the 6-channel video installation, Hotel Aporia (2019). This excerpt examines the concept of the void (absolute nothingness) as it is transmitted through the circle of Japanese philosophers known as The Kyoto School. The Kyoto School is a group of scholars centered on the figure of Kitaro Nishida (1870-1945), who had sought to overcome Western philosophy by drawing upon Eastern ideas. One of his foundational concepts “absolute nothingness” is said to have been intuited from his practice of Zen Buddhism, and traces of this concept can be found in the subsequent work and thoughts of his colleagues and students as they sought to find, or perhaps to create, the purpose and the moral significance of the war[s] that Japan was embroiled in. This video is specially edited for the exhibition Frequencies of Tradition, and it includes video footage of the Kiraku-tei, a Japanese-style inn, and restaurant that was the first site of the Hotel Aporia installation.

Reflecting on a similarly tumultuous period, Yoeri Guépin’s, Garden of Perfect Brightness (2019) examines the geopolitical history of China and Europe through the ruins of the Summer Palace (Yuánmíng Yuán) of the Qing Dynasty in Beijing, China. In 1860, the palace was ransacked and set on fire by British and French troops who looted more than a million objects, which are now on display in over fifty museums in Europe. The video pans over Rococo style ruins–while only 2% of the palace was constructed in the style (the rest was in the traditional Chinese style), this is all that remains to represent the palace.

Also traversing time and space, Ayoung Kim’s enchanting film Petrogenesis, Petra Genetrix (2019) takes the viewer on a journey through hyperbolic mythology based on a fictional genderless mineral Petra Genetrix. Through this character, Kim explores the Mongolian animist belief that positions land, mother rock, stones, and sacred caves at the center of their universe. By likening rocks and stones as the Earth’s memory storage vessel, the work illuminates the futurist potential of animism: “Quartz can be considered to be a type of natural computer since it absorbs and stores a large amount of energy“. The traditional spirituality oriented towards land or ancient animism reveals the potential equivalence between primeval objects and the futuristic memory sphere.

While Kim’s work explores the speculative potential of the Earth, Ming Wong’s Tales of the Bamboo Spaceship (2019) brings forth the imaginative possibilities of science fiction to explore the genesis of the traditional Southern Chinese art form of Cantonese Opera, and its evolution from the stage to the screen. Scrambling time, the work traverses alternative futurities of communities bound by language and cultural memory, while recalling opera’s coastal roots and relationship with traditional mythology of the sea.

Shanta Rao: A Memory (2020), by Ashoke Chatterjee in collaboration with Alexander Keefe, traces the dramatic shifts of classical Indian dance through the rebellious figure Shanta Rao and her artistic practice that went beyond her identity as an urban, educated, high-caste cosmopolitan. The work provides a rare and intimate glimpse into Rao’s life who was once one of the most visible representatives in the history of classical Indian dance but is now an obscure figure. Chatterjee, whose voiceover accompanies the images, saw Shanta Rao perform for the first time in 1953. He was an ardent chronicler of her life, witnessing many public performances and private practices until her death in 2007. In 1979, Chatterjee, then the director of India’s National Institute of Design, published Dances of the Golden Hall, a collaboration with Shanta Rao and photographer Sunil Janah (1918-2012), whose images you see.

Similarly challenging the act of forgetting, Erika Tan animates the figure of the Malayan (today, Singapore and Malaysia) weaver, Halimah Binti Abdullah, who as a British colonial subject, participated in the 1924 British Empire Exhibition in the United Kingdom that showcased the achievements of the empire, including human subjects, to the metropole. Her involvement in the exhibition was arguably two-fold: she was both a textile weaver and also producer of the image of the “Malay woman.” APA JIKA, The Mis-Placed Comma (3) (2017) invokes the form of academic debate to explore Halimah’s status as both subject and object. The work frames historical returns as complex in their desires and methodologies, always faulty and faltering, producing an interweaving of the past, present, personal, projected, and historical that will never be complete.
–Hyunjin Kim

About the program
Frequencies of Tradition is an online video exhibition that brings together six of the works featured in the eponymous group exhibition on view at the Guangdong Times Museum in Guangzhou, China through February 7, 2021.