Online Event: “I am deliberate / and afraid / of nothing” 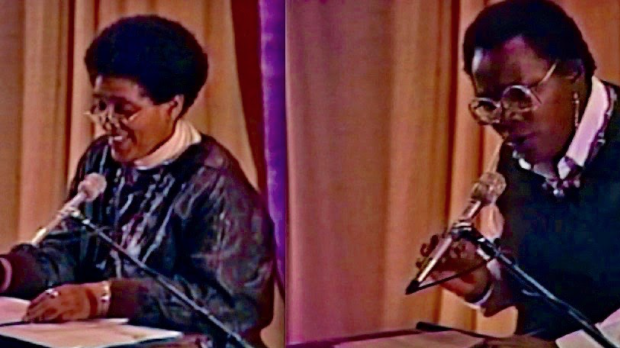 “I am deliberate / and afraid / of nothing,” an online event in honor of Audre Lorde and Pat Parker and in support of The Women’s Building

“I am deliberate / and afraid / of nothing” gathers six writers and artists to honor the work, spirit, and continuing influence of Audre Lorde and Pat Parker — two Black lesbian friends, dedicated movement workers, and outstanding, outspoken poets. Renowned Bay Area figures who knew Lorde and Parker, including Judy Grahn, Jewelle Gomez, and Avotcja, are joined by a new generation of artists and writers and artists, Arisa White, Leila Weefur, and Angela Hume. Inspired by Lorde and Parker’s dynamic epistolary exchange — held in Harvard’s library and recently anthologized — contributors will read from brand new work in letter-form. ‘Letter,’ in this case, is broadly interpreted as addressed to Lorde, to Parker, to them both, or to their spirits; to a particular thought or feeling, in response to a poem or other work of theirs; posed in the form of a crucial question, or as a kind of re-enabling in our present their questions and concerns. The reading is followed by discussion and a Q&A.

“I am deliberate / and afraid / of nothing” is co-organized with the Poetry Center, Women and Gender Studies–San Francisco State, and The Women’s Building.

Pat Parker’s Complete Works, followed by Sister Love: The Letters of Audre Lorde and Pat Parker 1974–1989 were recently published by Sapphic Classics and A Midsummer Night’s Press. She was the author of five poetry collections: Jonestown and other Madness (Firebrand Books, 1985), Movement in Black (Diana Press, 1978), Woman Slaughter (Diana Press, 1978), Pit Stop (Women’s Press Collective, 1975), and Child of Myself (Women’s Press Collective, 1972). She is known for her unflinching honesty in addressing issues of sex, race, motherhood, alcoholism, and violence. Audre Lorde called her poetry “clean and sharp without ever being neat.”

There is great and widespread awareness of Audre Lorde’s work, heightened by the appearance this year of Audre Lorde: Dream of Europe, Selected Seminars and Interviews 1984–1992. A self-described “black, lesbian, mother, warrior, poet,” Audre Lorde dedicated both her life and her creative talent to confronting and addressing injustices of racism, sexism, classism, and homophobia. She articulated early on the intersections of race, class, and gender in canonical essays such as “The Master’s Tools Will Not Dismantle the Master’s House.”

In lieu of a ticket price, please consider making a donation to The Women’s Building, a women-led non-profit arts and education community center located in San Francisco which advocates self-determination, gender equality and social justice. Founded in 1979, The Women’s Building has been the site for historic Poetry Center events, most significantly a landmark 1986 reading by Pat Parker and Audre Lorde, a solo reading by June Jordan in 1993, and a rare Bay Area appearance by Nicaraguan poet-priest Ernesto Cardenal in 2001.

Relatedly, and online for the first time, the Poetry Center is hosting the remarkable video of Lorde and Parker’s landmark February 7, 1986 reading at The Women’s Building, alongside Lorde’s earlier 1974 reading for The Poetry Center. They are featured in ‘Black Women in the Archives,’ a collection of historic original videos selected by Arisa White, at Poetry Center Digital Archive.

“I am deliberate / and afraid / of nothing,” an online event in honor of Audre Lorde and Pat Parker and in support of The Women’s Building, Thursday, November 5, 2020, 7pm to 8:30pm

The event will be live streamed on Zoom
Free to attend, RSVP required

In lieu of a ticket price, please consider making a donation to The Women’s Building, a women-led non-profit arts and education community center located in San Francisco which advocates self-determination, gender equality and social justice.