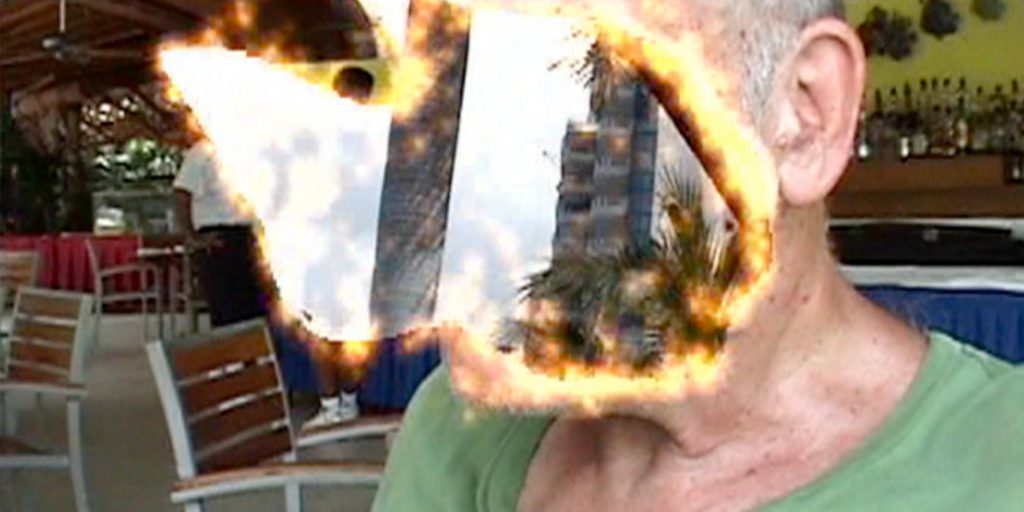 Films, stories, and more, followed by a conversation with Julio Morales. Presented in collaboration with San Francisco Art Institute (SFAI)

Ten years ago, underground film legend George Kuchar and his former student, Miguel Calderón, took a working vacation to Acapulco. Their goal was to produce a strange and singular film, shot on location in a tourists’ paradise. Kuchar, just as compelling on screen as behind the camera, would play the leading man. The fruits of their labor, Tropical Vulture, combines Hollywood glamour with non-professional actors to reflect on heartbreak and lust on the sandy shores of Mexico.  On the same trip, Kuchar made Burrito Bay, a video that follows the format of a diary and lends a completely different perspective to their journey. It provides a behind-the-scenes glimpse of the crew and of the boisterous workings of the artist’s inner mind.

A decade later, and eight years after Kuchar’s passing, this special 10th anniversary program brings Calderón back to SFAI to reflect on both films, on the harrowing tale of accidentally deleted video footage–weeks worth of filming wiped from a hard drive–and on the profound influence that Kuchar continues to have on his practice and life. The event includes a presentation by Calderón that includes clips of both Tropical Vulture and Burrito Bay, a never-before-seen interview in which Kuchar reflects on the lost footage, and a conversation between Calderón and artist/curator Julio Morales, the original commissioner and presenting curator of both films.

George Kuchar (1942–2011) was a key figure in experimental and independent filmmaking in the Bay Area and across the world. He gained prominence through his Super 8 and 16mm films produced throughout the 1950s, 60s, and 70s. In the 1980s, after more than three decades working with film, Kuchar transitioned to video. He subsequently created hundreds of low-fi, diaristic videos that oscillated between real life and fiction. Many of these camcorder pieces featured Kuchar and his friends as actors. He also regularly collaborated with his students from the San Francisco Art Institute, where he taught for many decades. Throughout his prolific output of over 350 films, Kuchar pushed the limits of film and cinematic tradition, creating his own distinct visual language. Kuchar embedded his eccentric videos with his most intimate and profound self, using strange humor and joyous nonsense – featuring UFOs, weather, defecation, and forbidden passions.

Miguel Calderón (b. 1971, Mexico City) explores a broad range of themes, from violence and corruption in Mexico to youth and family dynamics to the supernatural. However, it is unified by an ever-present sense of theatricality, questioning the fine line between reality and fiction. Frequently cast from the perspective of an outsider, his work highlights the macabre complexity of man’s position in the universe deftly weaving together mockery, foolishness, social critique and sincerity of emotion. Calderón received his BFA from the San Francisco Art Institute in 1994. He has been the recipient of the Cisneros Fontanals Art Foundation Grant & Commissions program (2013), The MacArthur Fellowship for Film and New Media (2000), and the Bancomer/Rockefeller Fellowship (1995). Calderón has participated in various biennials, including the 7th Internationale Photo-Triennial, Esslingen, Germany (2007); Bussan Biennale, Bussan, Korea (2006); Sharjah Biennial 7, Sharjah, United Arab Emirates (2005), Yokohama Triennale of Contemporary Art, Yokohama, Japan (2005).

Founded in 1871, SFAI is one of the country’s oldest and most prestigious institutions of higher education in the practice and study of contemporary art. As a diverse community of working artists and scholars, SFAI provides students with a rigorous education in the arts and preparation for a life in the arts through an immersive studio environment, an integrated liberal arts and art history curriculum, and critical engagement with the world. Committed to educating artists who will shape the future of art, culture, and society, SFAI fosters creativity and original thinking in an open, experimental, and interdisciplinary context. For more information, visit sfai.edu.

The Visiting Artists and Scholars Lecture Series (VAS) provides a public forum for engagement and dialogue with major figures in international contemporary art and culture. Through lectures, screenings, and performances, the series creates intimate connections between SFAI, artists, and the public.