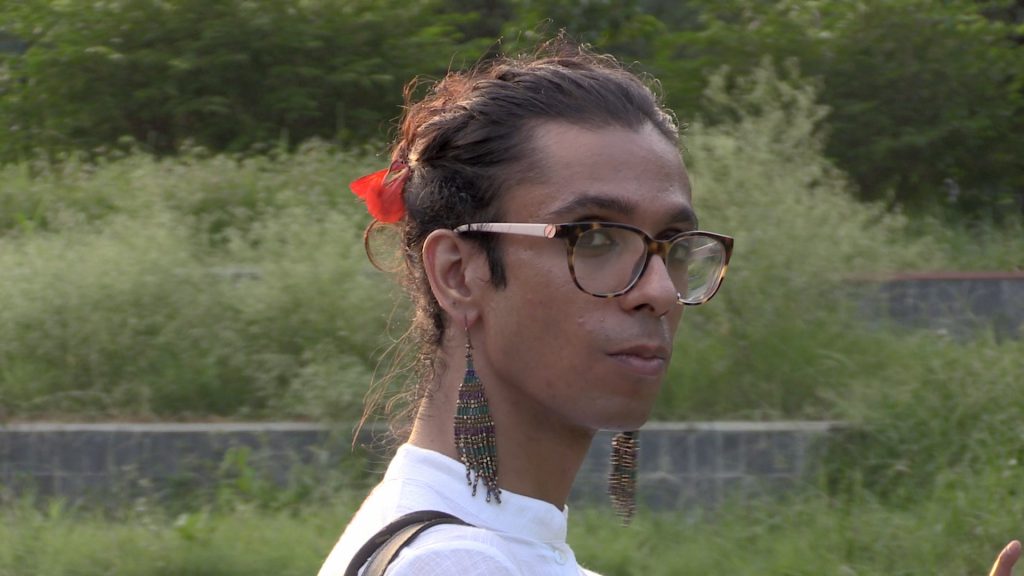 The experimental documentary video portrait VQUEERAM (2016–ongoing) is part of a collaborative project initiated by Los Angeles-based artist Vishal Jugdeo with Vikram “Vqueeram” Aditya Sahai, a poet, activist, and teacher based in New Delhi, India. Meandering through public and private spaces throughout Delhi, Vqueeram delivers anecdotal accounts of their experience as a visibly genderqueer person living in the city. Through a mode of address that moves fluidly between direct and casual, Vqueeram’s stories and observations speak to the failings of language, identity categories, and the body itself as a site of ontological definition around sexuality or gender.

In VQUEERAM, the protagonist’s humorous, discerning, and heartbreaking contemplations suggest that attempts at absolute autonomy are futile within cultural frameworks of family, community, history, and civic obedience. As the obviously convivial relationship between Vqueeram and Jugdeo makes clear, queer friendship and companionship offer powerful respite from the alienation and othering Vqueeram experiences when navigating his world. The artists continue to work together, documenting the shifting realities of queer and trans life in India.

Jugdeo screens his work VQUEERAM (14.00 mins) along with related footage that Jugdeo and Vqueeram have filmed together over their three-year collaboration. The screening is followed by a discussion with Tina Takemoto, noted artist, scholar, dean of Humanities and Sciences at California College of the Arts, San Francisco.

Vishal Jugdeo is an interdisciplinary artist who works with video, installation, performance, and sculpture to construct experimental approaches to narrative. Weaving together strategies from television, documentary and narrative cinema, and theater, he emphasizes the physical and psychical space around moving images, revealing the mediated process through which we interpret and understand the unfolding present. He has exhibited widely including solo exhibitions at the ICA Philadelphia, LAXART, Los Angeles, Western Front, Vancouver and 18th Street Arts Center, Santa Monica. Major commissioned works have been featured in Performa, New York, Made in LA at the Hammer Museum Los Angeles and the California Biennial at the Orange County Museum of Art. Jugdeo is Assistant Professor in New Genres at the UCLA Department of Art.