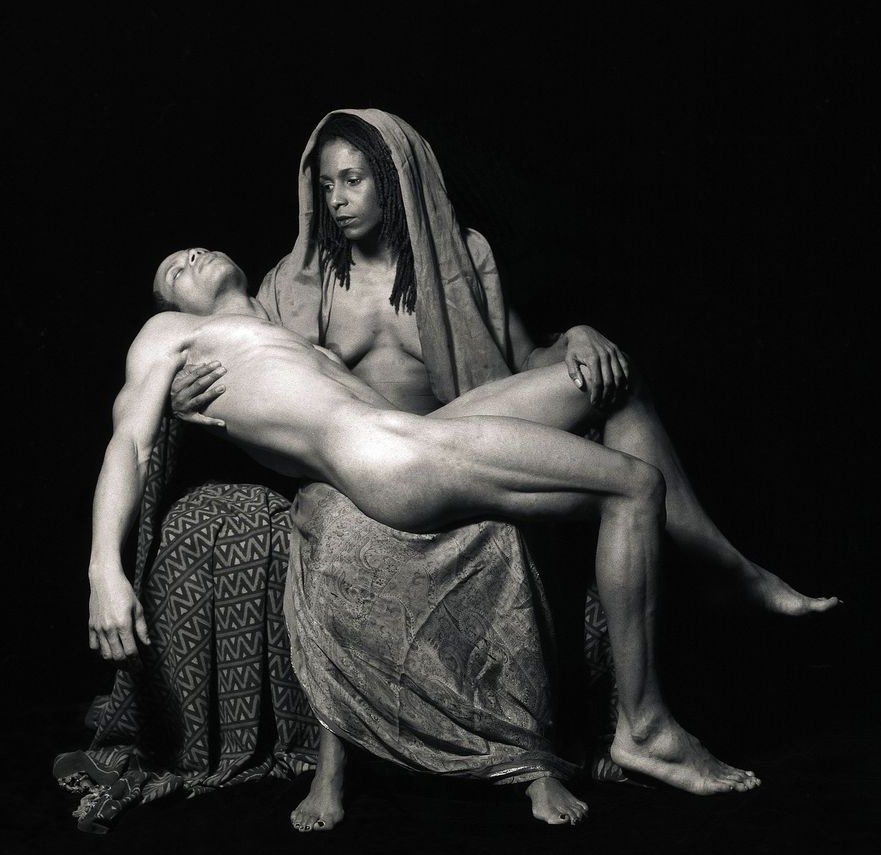 In connection to the exhibition, Hank Willis Thomas selected these films in homage to innovative and influential creators in the medium of film whose work supports social justice as well as explores contemporary notions of identity, race, history and a national legacy of resistance.

This satirical Sci-Fi/Horror film follows a nameless drifter (listed as “John Nada” in the credits) who, through a pair of found sunglasses that reveal the world as it truly is, discovers the ruling class are in fact aliens concealing their appearance and manipulating people to spend money, breed, and accept the status quo with subliminal messages in mass media. In his documentary The Pervert’s Guide to Ideology, Slovene philosopher and psychoanalyst Slavoj Žižek states “They Live is definitely one of the forgotten masterpieces of the Hollywood Left. … The sunglasses function like a critique of ideology. They allow you to see the real message beneath all the propaganda, glitz, posters and so on. … When you put the sunglasses on you see the dictatorship in democracy, the invisible order which sustains your apparent freedom.”

When its chairman dies, an advertising firm’s executive board must elect someone to fill the position. Each member, unable to vote for himself, casts a secret ballot for Putney Swope (Arnold Johnson), the firm’s only black executive, assuming he wouldn’t receive any votes from the other members. But once in power, Swope makes radical changes to the firm — like keeping only one white employee and refusing to advertise harmful products — all under the firm’s new moniker, “Truth and Soul, Inc.” This comedy satirizes the advertising world, the portrayal of race in Hollywood films, the white power structure, and the nature of corporate corruption.

Through a Lens Darkly

Inspired by the book “Reflections in Black” (2000), Deborah Willis’s groundbreaking and thorough excavation of a vital and neglected photographic tradition, Through a Lens Darkly is a family memoir, a tribute to unsung artists and a lyrical, at times heartbroken, meditation on imagery and identity.  Director Thomas Allen Harris marshals an impressive collection of scholars, artists and photojournalists to help us understand what we see in portraits of enslaved blacks and 19th-century antislavery crusaders like Frederick Douglass and Sojourner Truth. Along the way, we learn about the importance of professional photographers in the segregated South and in Northern cities; about the semi-visibility of gay and transgender aunts, uncles and cousins in the collective black family album; and about the depth and variety of the African-American photographic tradition.

Follows three friends, Lanisha (Kerry Washington), Maria (Melissa Martinez) and Joycelyn (Anna Simpson), best friends and members of their school’s marching band, through the hot streets of Crown Heights, Brooklyn. During the closing weeks of summer, the small moments and dramas that mean nothing and everything to a young girl navigating her way into adulthood start to accumulate. And the girls and their friendships change forever.

Utilizing excerpts from the award-winning non-fiction text “A Small Place” by Jamaica Kincaid, Life & Debt is a woven tapestry of sequences focusing on the stories of individual Jamaicans whose strategies for survival and parameters of day-to-day existence are determined by the U.S. and other foreign economic agendas. By combining traditional documentary telling with a stylized narrative framework, the complexity of international lending, structural adjustment policies and free trade will be understood in the context of the day-to-day realities of the people whose lives they impact.

Marking the close of the exhibition, and punctuating his curated film series, several film and video works by the artist will be presented together in sequence. Works include Winter in America (2005), Along the Way (2007), A Common Misunderstanding (2011), Overtime (2011), Question Bridge (2012), Peace (2013), and Am I Going Too Fast? (2014).The screenings will be followed by a discussion with two of Hank Willis Thomas’ collaborators on the films: Jessica Ingram, and Chris Johnson.