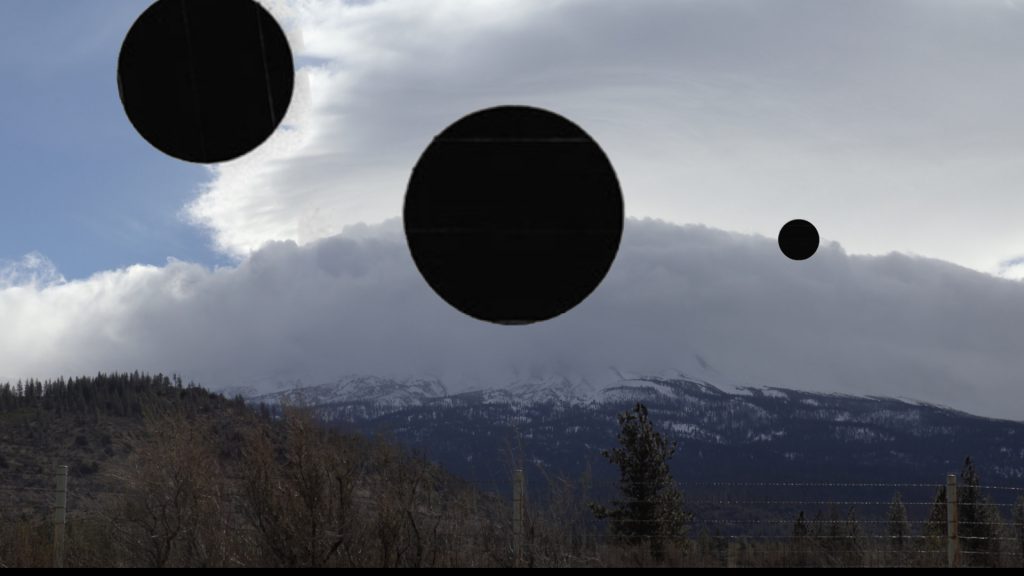 Despite common belief, some alien inhabitants of the lost continent of Lemuria survived its sinking on Earth thousands of years ago.[1] Limited information prevents researchers from fully comprehending the outer space population, their demographics and customs, or even the reason for their subsistence on Earth, resulting in inconsistent versions of their subsequent histories. Yet multiple accounts have established with quasi-certainty that some Lemurians remain on Earth today near its core, deep beneath the 14,179-foot Mount Shasta, CA, appearing infrequently to human witnesses. Following her investigation into the mysterious residents of Mount Shasta, Kadist A.I.R. Yin-Ju Chen conducted field research and interviews with local inhabitants of the volcanic territory. Her exhibition and multimedia installation, at Kadist, Extrastellar Evaluations, uncover unique materials that reveal unforeseen information about the Lemurians’ earthly presence.

Consisting of archival photographic and video materials, as well as objects created by Lemurians, the works featured in the exhibition function as evidence confirming that Lemurians were evolving among human communities in the mid-20th century under the identities of artists, practicing in the United States. Including many familiar names to the human art world like Carl Andre, Mel Bochner, and James Turrell among others, these personas used forms like cubes, monoliths, obelisks, crop circles, etc. as communication tools to report back on human actions to their mother planet. Channeled through a psychic medium named Lucia, a video introduces us to these translated messages from Adama, High Priest and spiritual leader of the Lemurians. A graphic representation in the space highlights the multitude of possible relations between the delivered information (human actions), their mediums (so-called minimal and conceptual works), and the space in which they evolve (universe).

Extrastellar Evaluations focuses specifically on the 1960s as a key historical era for both Lemurians and humans. For humans, the 1960s denoted a complex interrelation of cultural and political events worldwide amid the 1962 Cuban Missile Crisis, the beginning of the Cold War (1962–1979), the enduring Vietnam War (1955-1975), Africa’s independence movements, Cultural Revolution in China (1966–1976), African-American civil rights movements and 1968 protests in Europe, the 1968 assassination of Martin Luther King, Jr., to name a few. For Lemurians, this era was marked by a series of severe weather events that disturbed their transmission routes, such as record-breaking flooding and snowstorms (1955/56, 1959, 1964/65, etc.).[2] Pushed far beyond the immediate vicinity of Mount Shasta as a consequence, the Lemurians sought new forms of and locations for communication with their motherland. They initiated prolific creations of geometric-shaped transmission devices on a national scale, made visible by human interpretation and appropriation as conceptual and minimalist artworks.

Revisiting dreadful human actions of the 1960s through the lens of outer space intelligence, Extrastellar Evaluations questions our understanding of our past while encouraging different interpretations of our existence on earth. In this context, the multimedia installation opens consciousness toward the risks of human activities, echoing today’s anxieties toward issues of global warming, continuous conflicts and exploitation of resources. In addition, mirroring its past, present and future, Yin-Ju Chen’s work addresses early signs of our becoming lost in this world. In doing so, the artist echoes theorist Franco “Bifo” Berardi’s observation of humans’ loss of faith in the reality of life, suggesting a larger, long-term phenomenon rather than a recent trend linked to the development of media and information technology.[3] In light of Lemurians’ ambiguous presence on earth, the installation also implies the inevitability of the cycles of history, sealed by an external force–as evidenced by Chen’s 2012 three-channel video installation One Universe, One God, One Nation examining the dictatorship of Chinese leader Chiang Kai-Shek. Considered alongside this latter body of work, Extrastellar Evaluations develops the scope of Chen’s long-term consideration of notions of “power” and collective (un)consciousness.

[1] College of the Siskiyous, “The Origin of the Lemurian Legend” www.siskiyous.edu/shasta/fol/lem/index.htm

[2] College of the Siskiyous, “Historical Storms of Mount Shasta.” www.siskiyous.edu/shasta/env/storm/

Opening Reception on Wednesday, May 11, 6-9pm