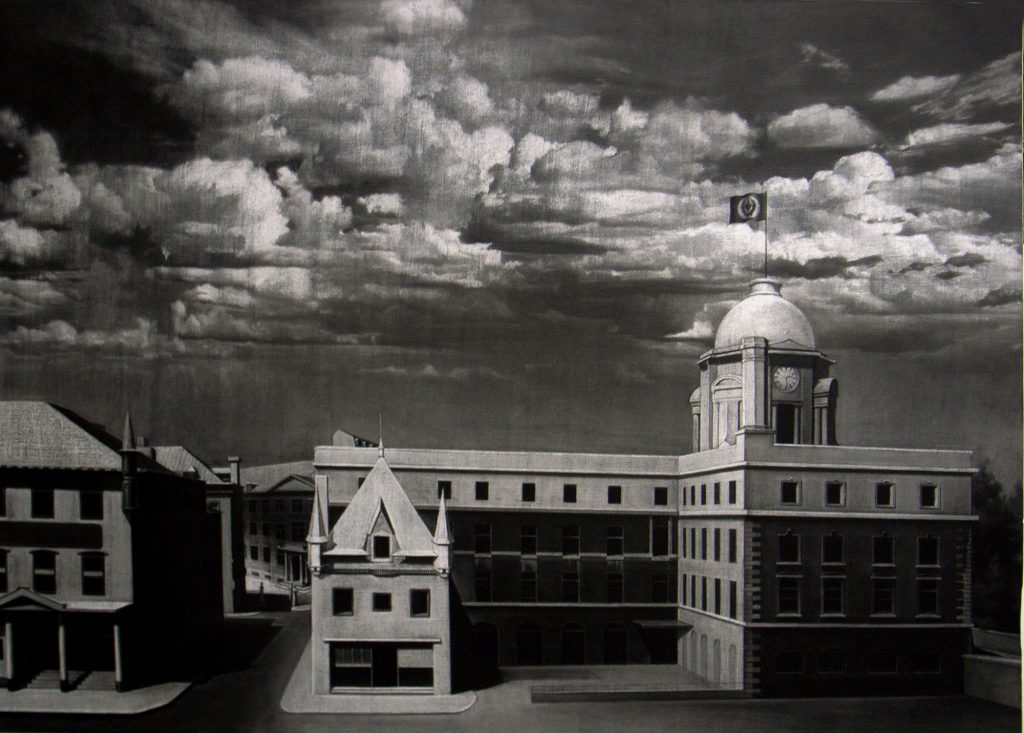 Sun’s animated film 21 Ke (21 Grams) is based on the 1907 research by the American physician Dr. Duncan MacDougall who claimed the measured weight of the human soul to be twenty-one grams. Sun used this episode—which was not fully recognized by the scientific community—as a point of departure for his depiction of a dystopian world in which the narration of history and notion of time are interrupted. Because each frame was drawn by hand with crayon, it took Sun and his animation studio team a few years to complete this thirty-minute film of a surreal journey through mysterious cities, plagues of mosquitoes, broken statues, cawing ravens, waving flags, and flooded graveyards. Here, an ever-present man in a top hat makes obscure, cryptic references in scenarios that include the national anthem, factories belching soot into the threatening sky, and soaring planes dropping leaflets to earth. Rather than encouraging specific interpretations, 21 Ke is a visual commentary that asks essential questions of human existence: Who we are? What have we done? Where are we heading?

Sun Xun creates videos and animation films from his meticulous, highly detailed, and often monochromatic, hand drawings executed in ink, oil, and crayon. Drawing on the ideas of thinkers like Karl Marx, Theodor Adorno, and Max Horkheimer, Sun investigates revolution, existence, mythologies of society, the notion of time, and the construction and narration of history. Often in a style of magical realism, Sun’s works are full of metaphors and indirect visual associations that beg to be deciphered. He graduated from the print making department of the China Academy of Fine Art in 2005, and, a year later, established ? Animation Studio. He has received several awards including the “Chinese Contemporary Art Awards (CCAA Best Young Artist)” and “Taiwan Contemporary Art Link Young Art Award,” both in 2010.
Biography
Sun Xun
Born 1980, China
KADIST VIDEO LIBRARY
Login to watch video
Related