Gala Porras-Kim
4 mourners on a mantel 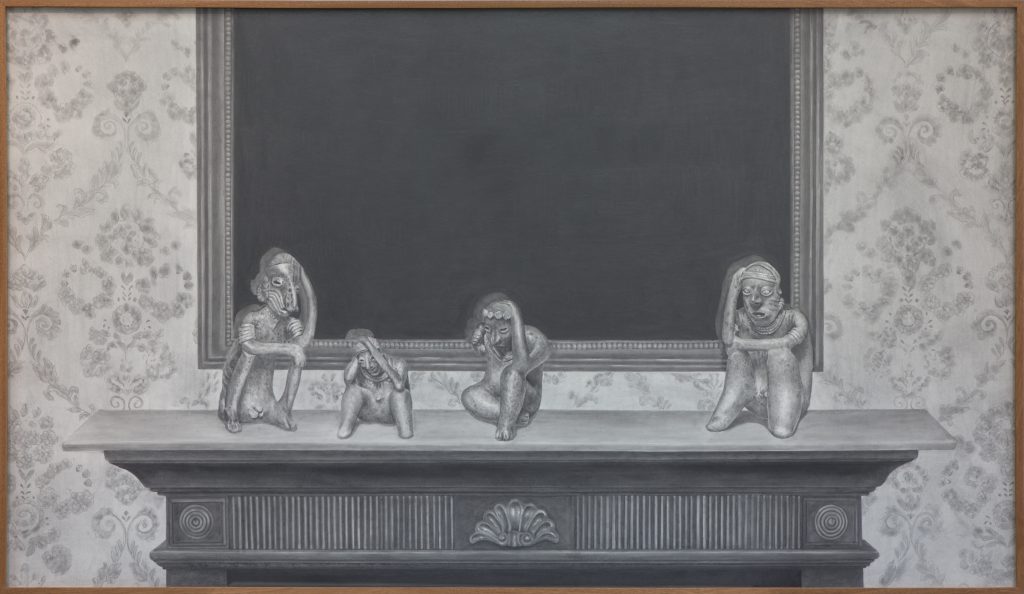 4 mourners on a mantel is part of Gala Porras-Kim’s larger installation and body of research—entitled An Index and Its settings—in which the artist reconsiders 235 ancient burial figures (from circa 200 BCE – 50 CE) from what is now Mexico’s Pacific coast that are part of the Proctor Stafford Collection held by the Los Angeles County Museum of Art (LACMA). Eschewing their current musicological function, 4 mourners on a mantel presents photo-realistic depictions of said figures on top of a hypothetical collector’s fireplace. Herein, these funerary objects are displaced as curios which stare back at the viewer in signs of grief and confusion. Could they be lamenting their lost hosts, or are they upset with being dug up, bought and sold, and ultimately transformed from sacred objects into appropriated trinkets for domestic entraining?

Whatever the case may be, Porras-Kim touches on the strange life of objects (and their authors) as their use and meaning is tempered not by their inherent form, but by ownership and various display apparati.  Eschewing a pure materialist reading, An Index and Its settings challenges how strict formalist interpretation of artworks can obfuscate the ethical and political means of exchange through which an object is handled. These works can likewise be viewed as ciphers in which mute objects are made to perform acts of ventriloquism to satisfy the desires of those who possess them.

Gala Porras-Kim's work plays objects against their framing to consider how an artefact’s "message" is tempered by display, use, historic setting, and other modes of exchange.  In particular, she often works with pre-Colombian objects, dead languages, and like archaeological fragments whose intention and original context have been obscured by time, or by inscription into another culture. In doing so, Porras-Kim presses the subjective nature of archaeology as well as the general epistemology of all forms of historiographic science. If cultural history is a mode to consider where we come from, Porras-Kim's work teases that these background narratives are not only incomplete but may be contaminated by contemporary assumptions, wants, and biases around material culture and its presentation.
Biography
Gala Porras-Kim
Born 1984, Colombia
Lives in LA
Details
108 x 184 x 6.35 cm.
Graphite on paper
Related