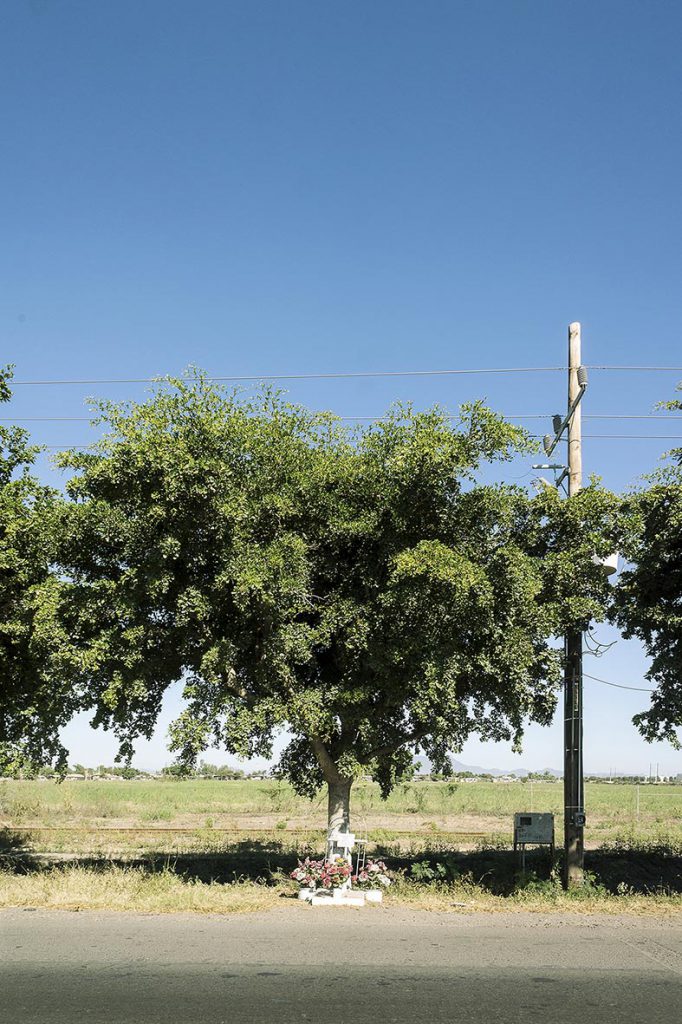 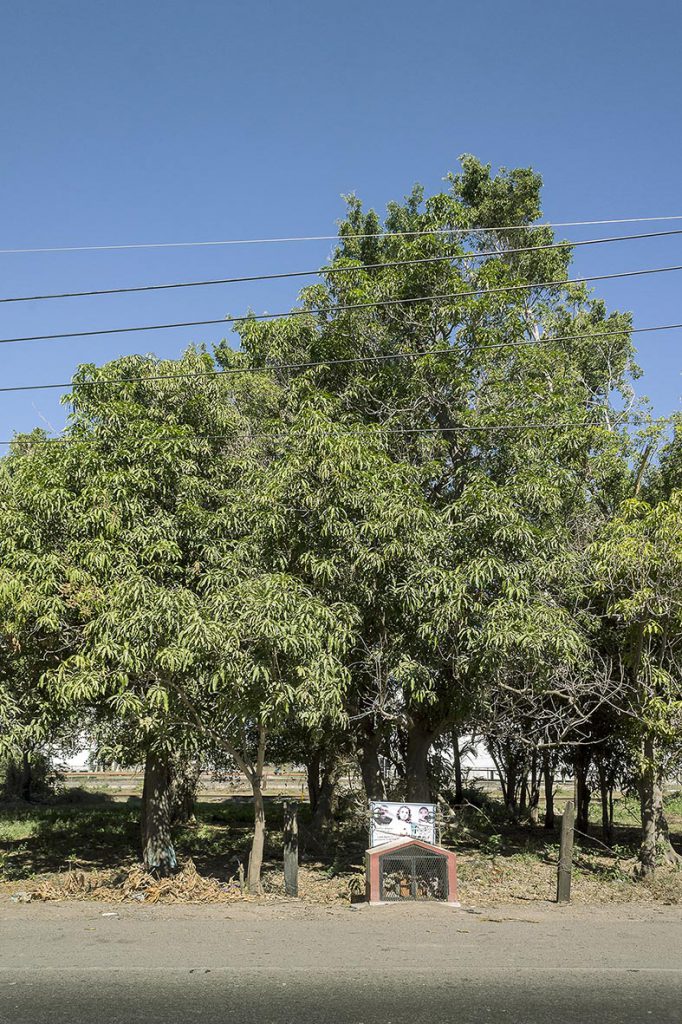 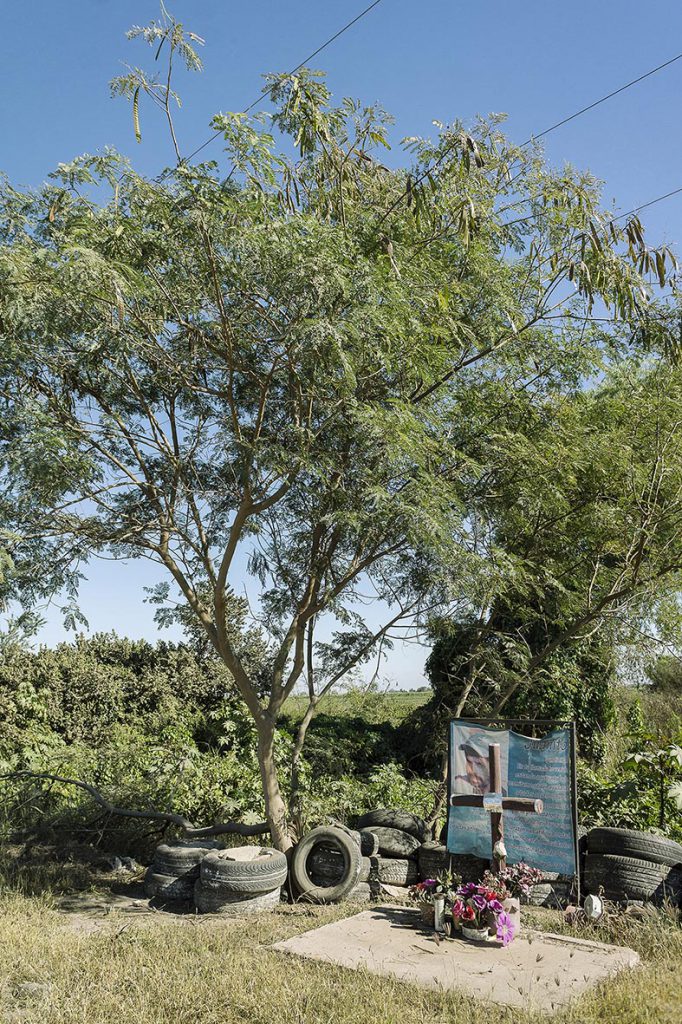 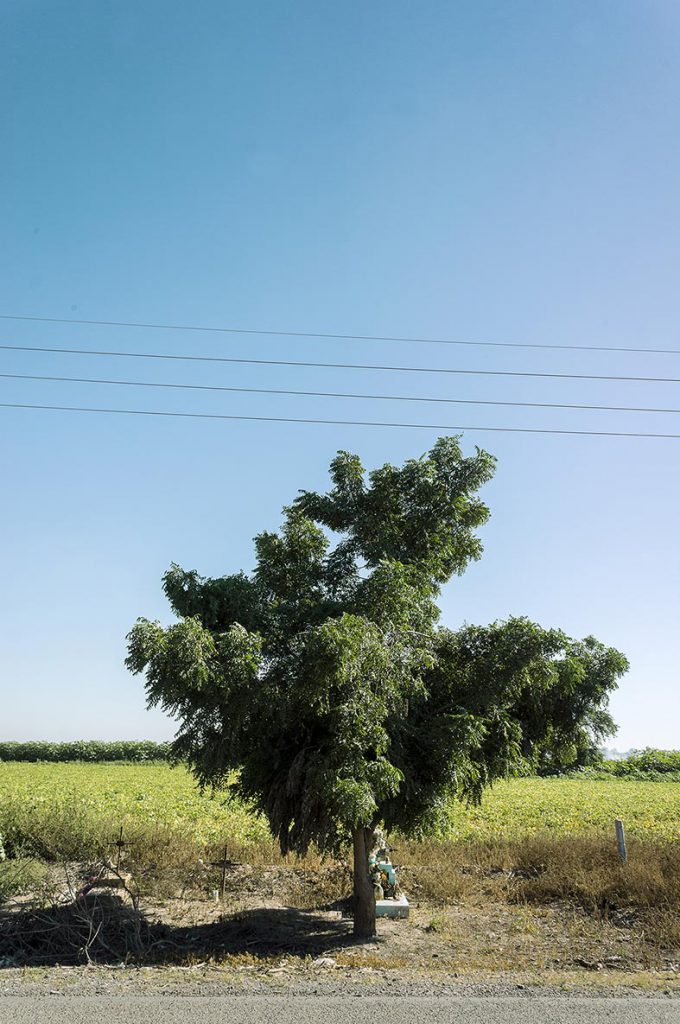 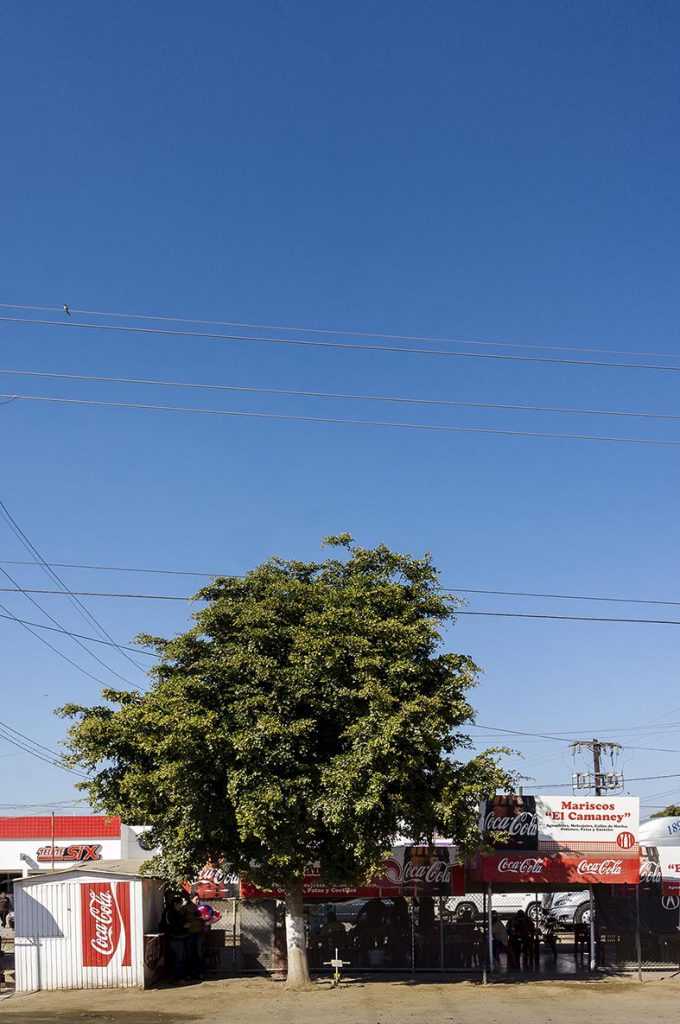 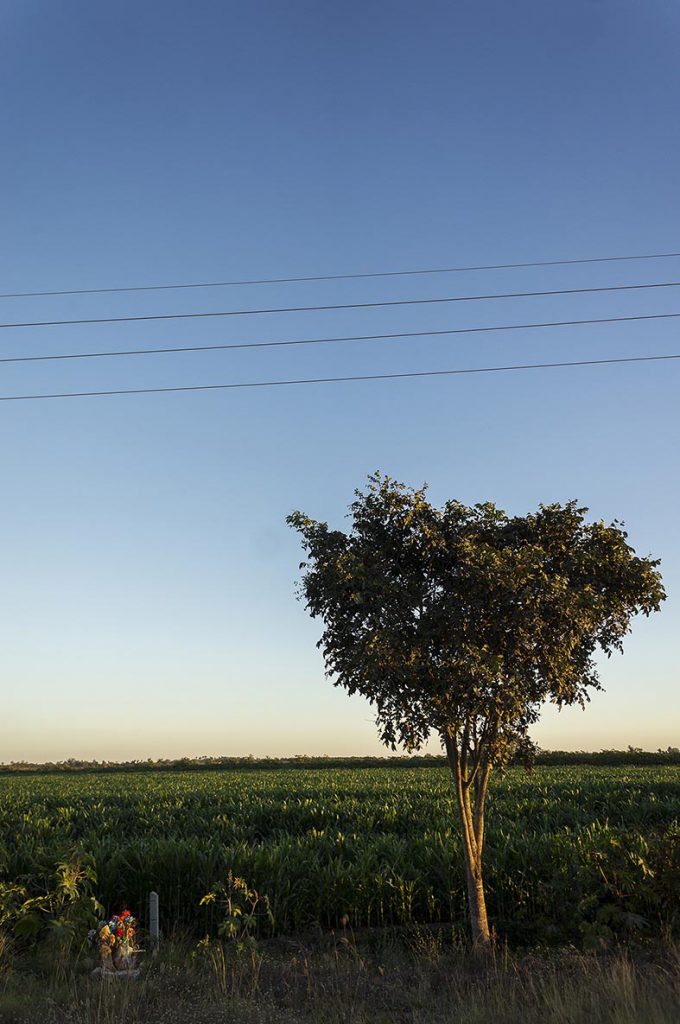 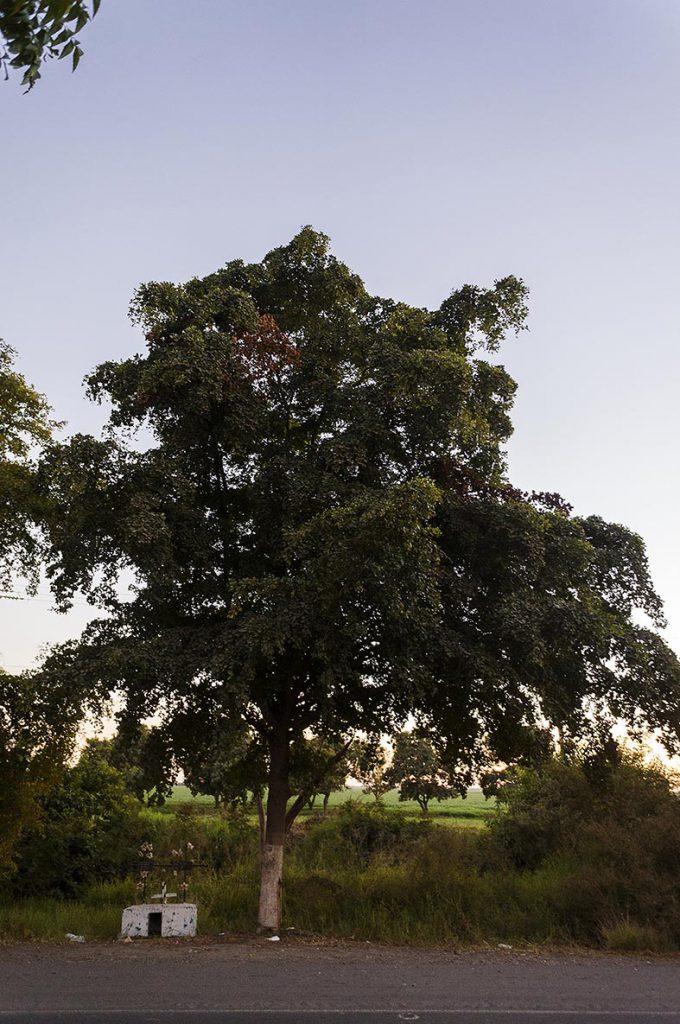 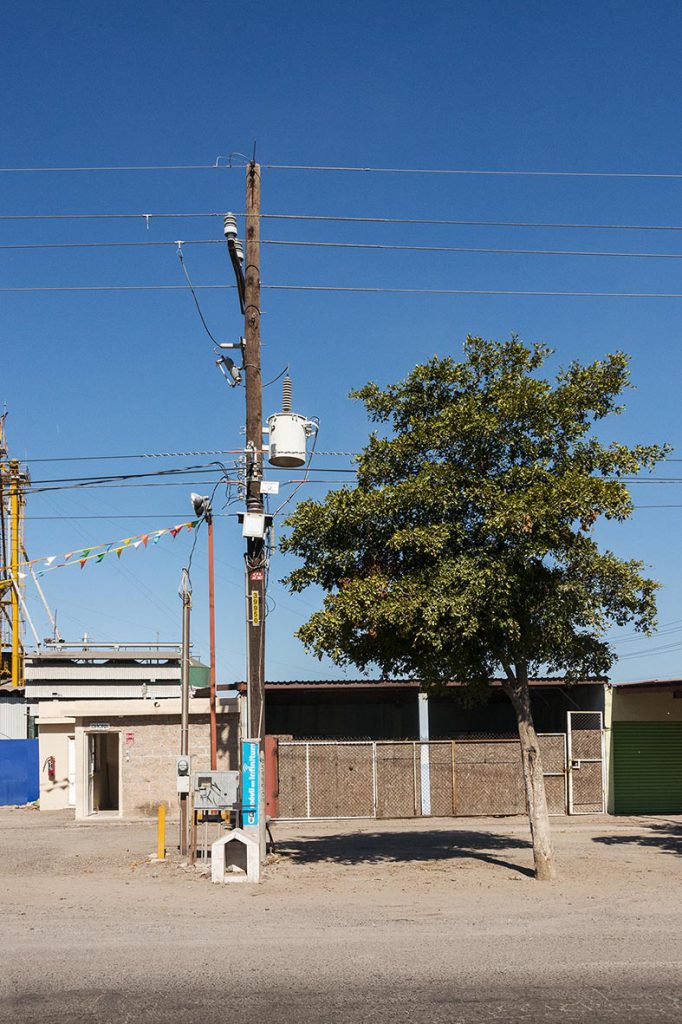 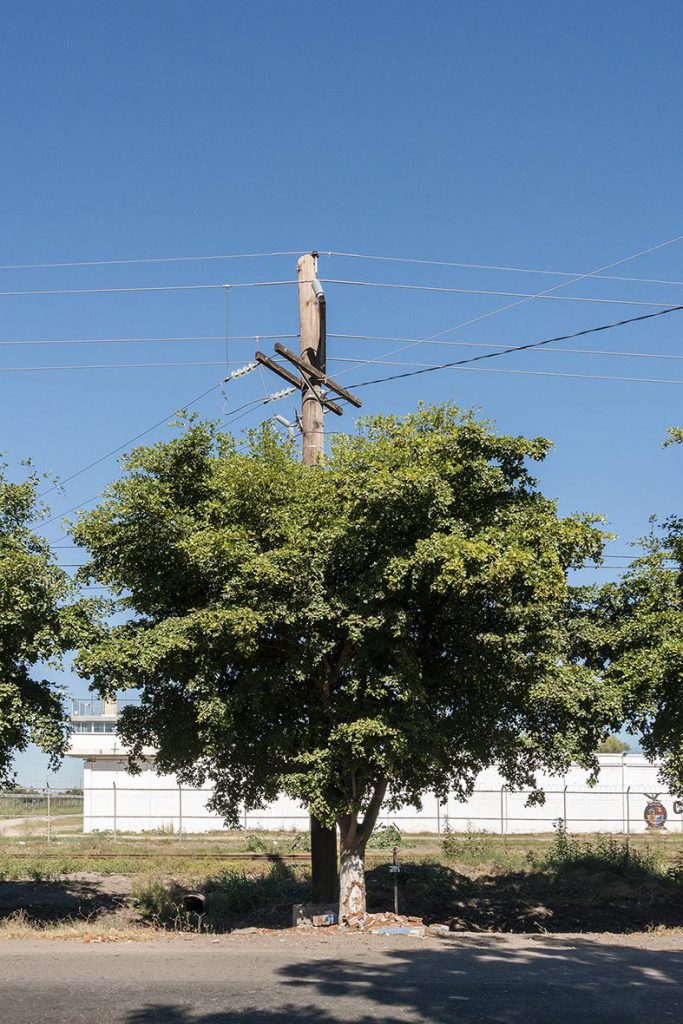 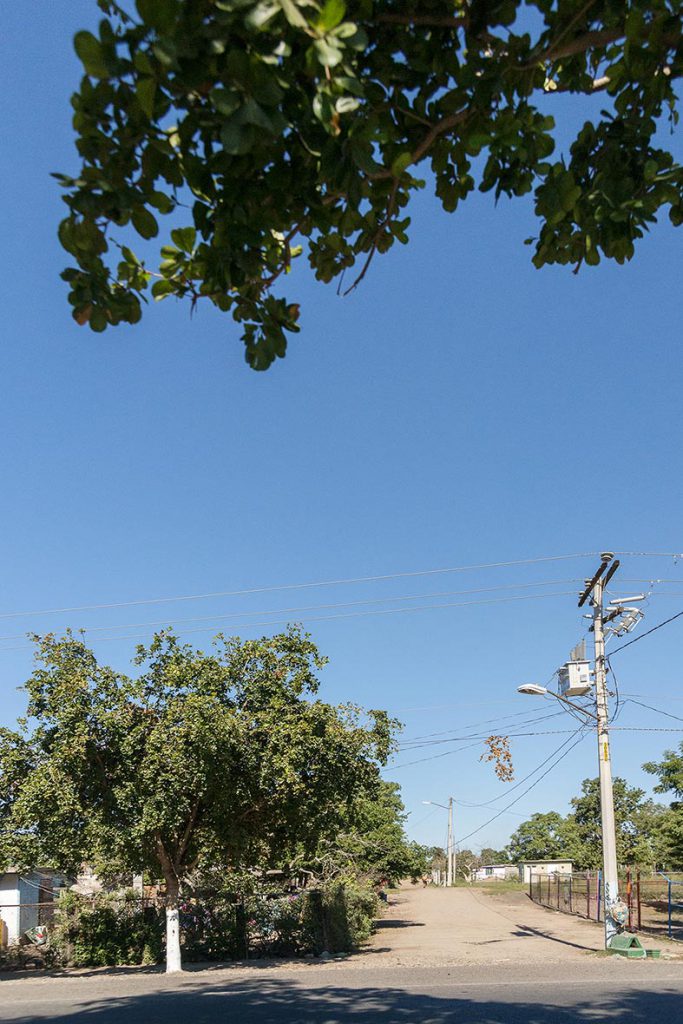 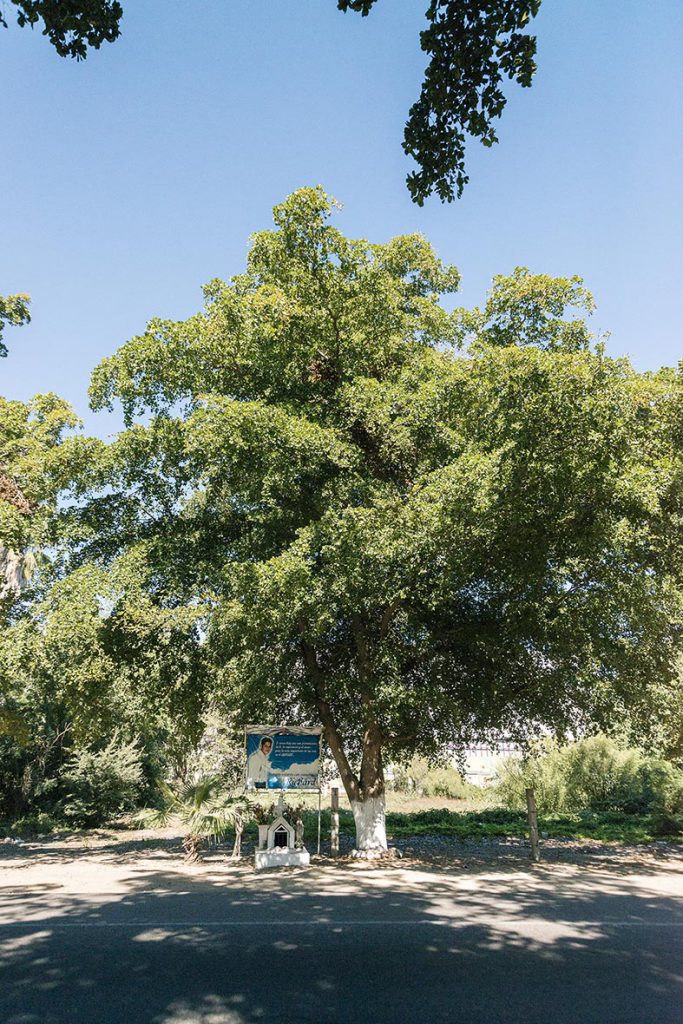 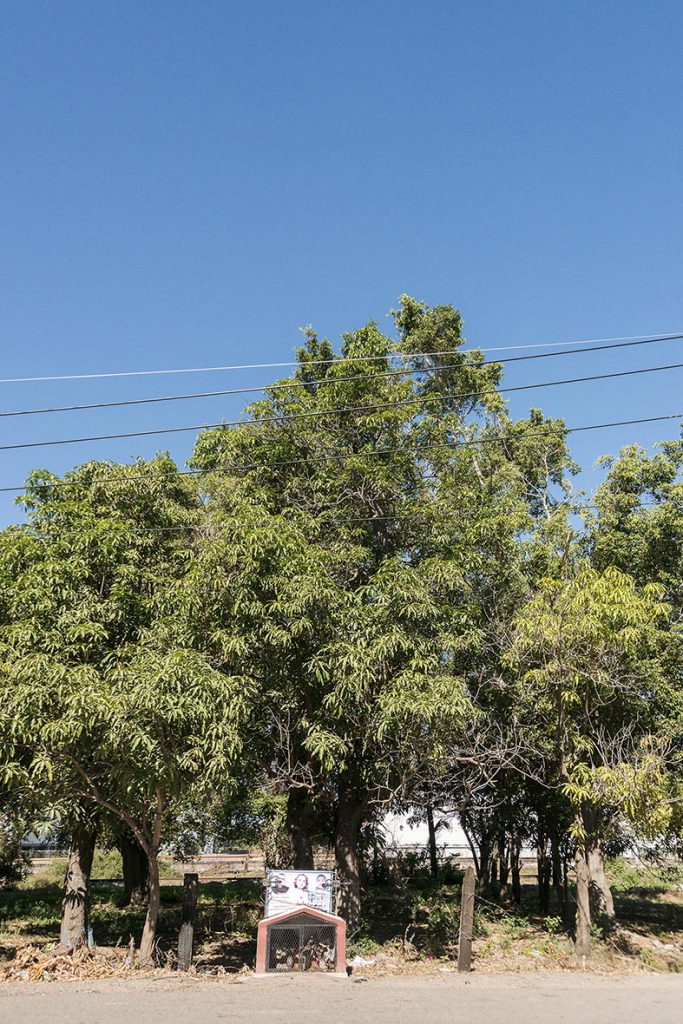 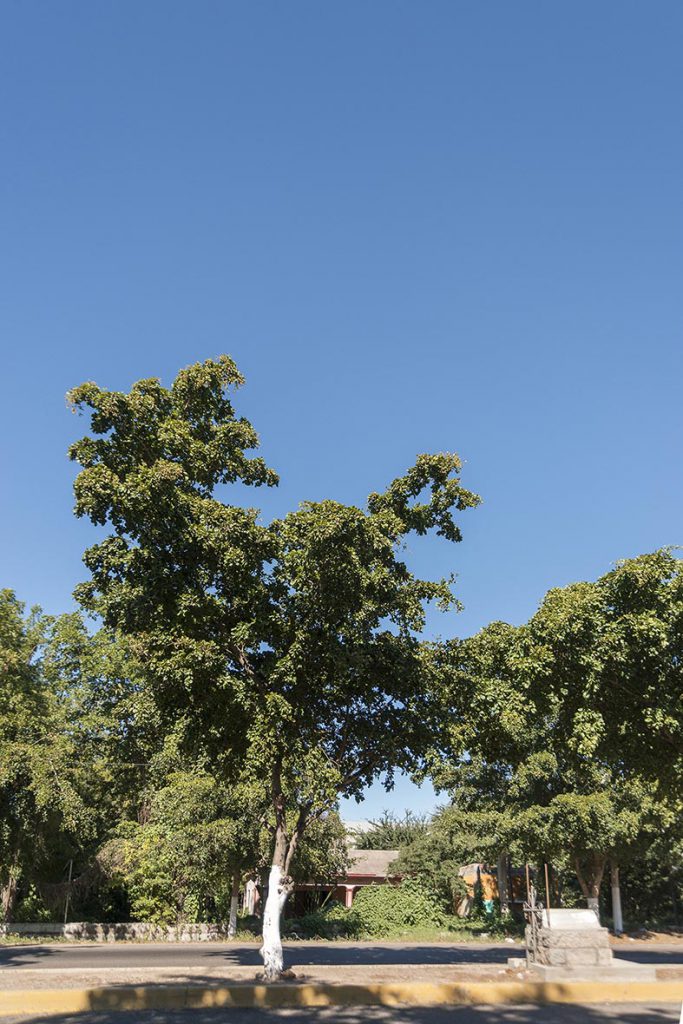 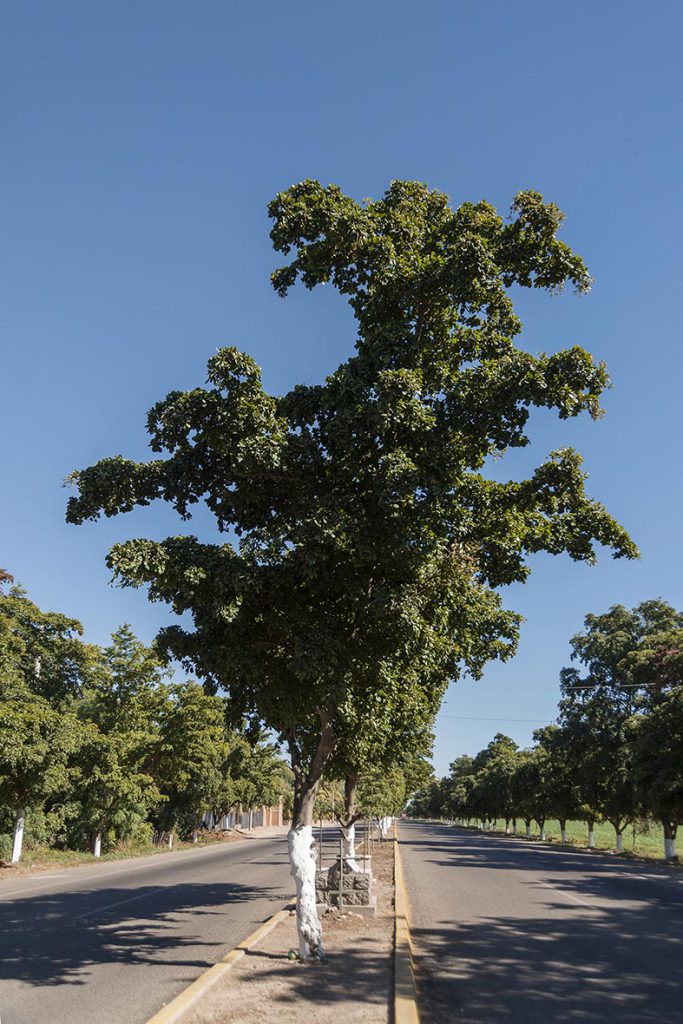 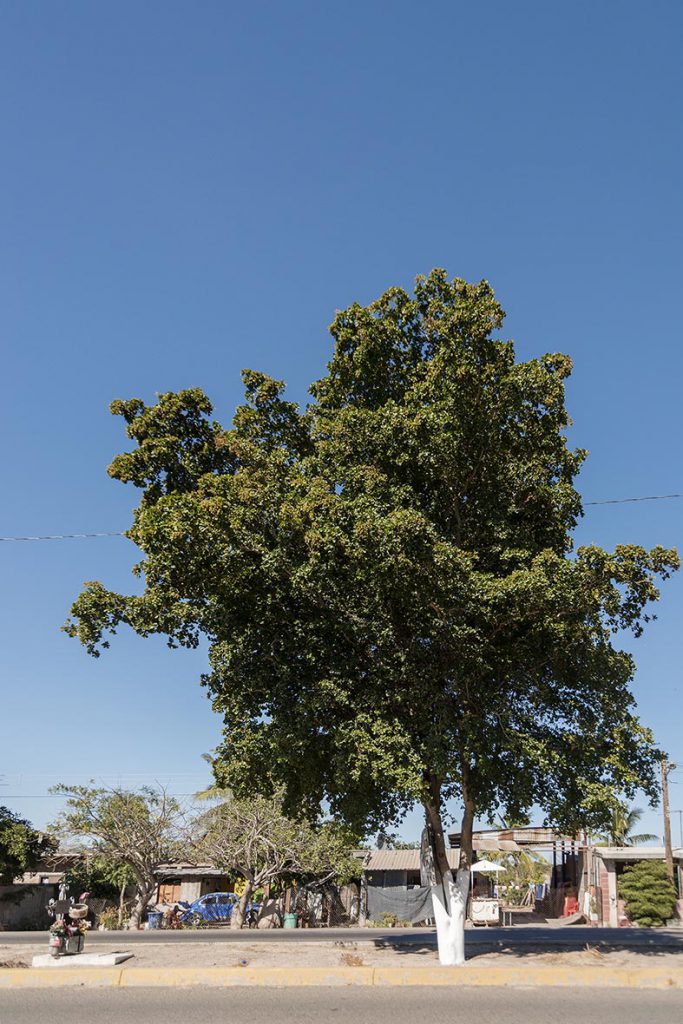 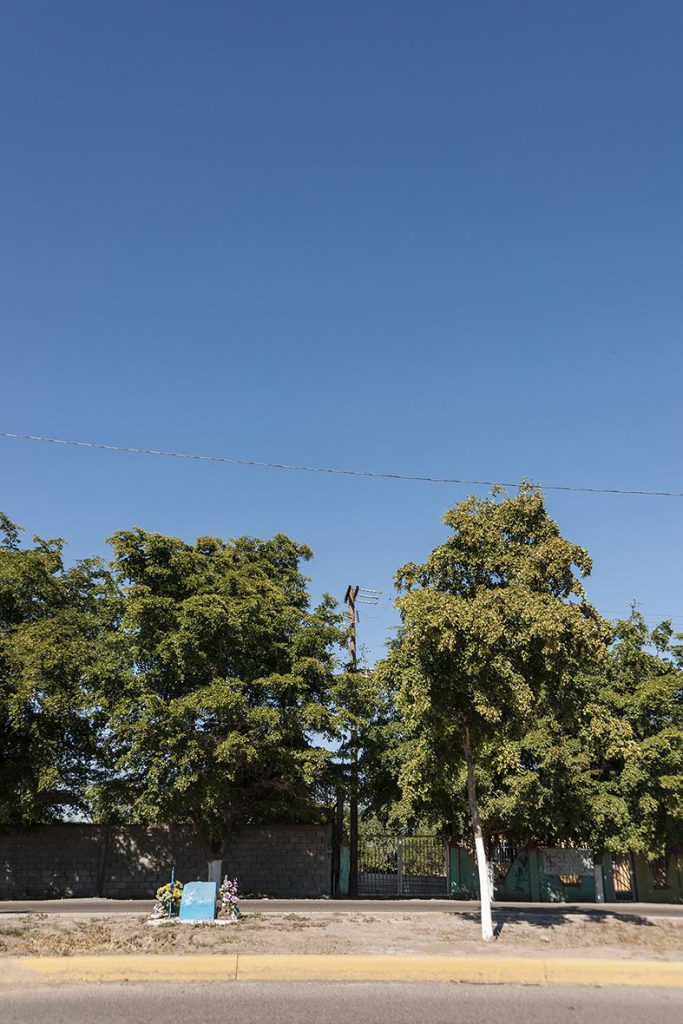 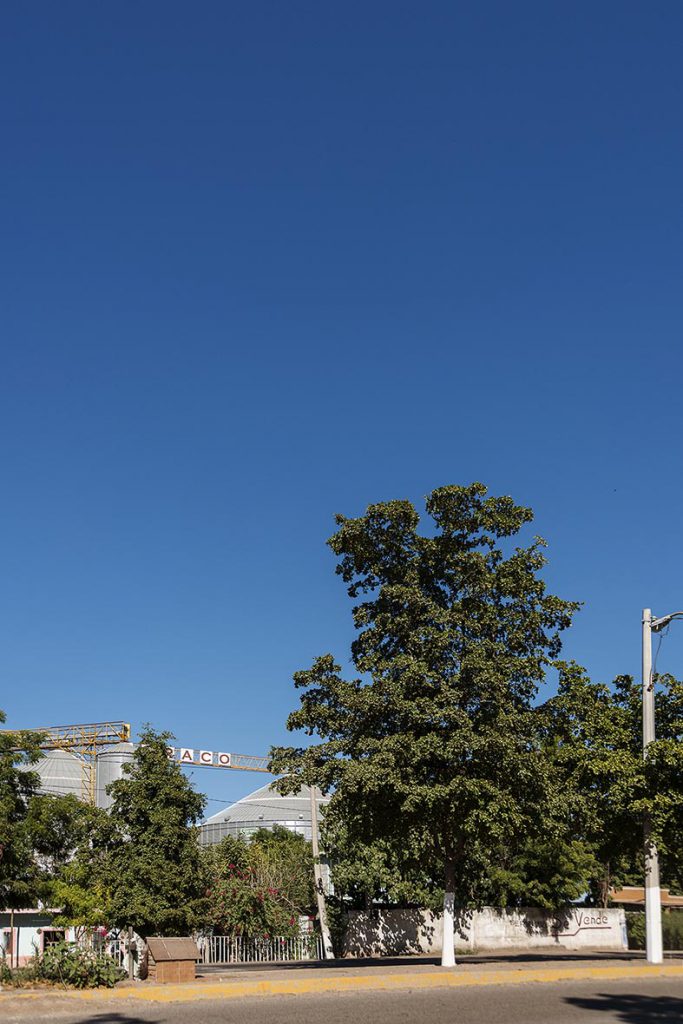 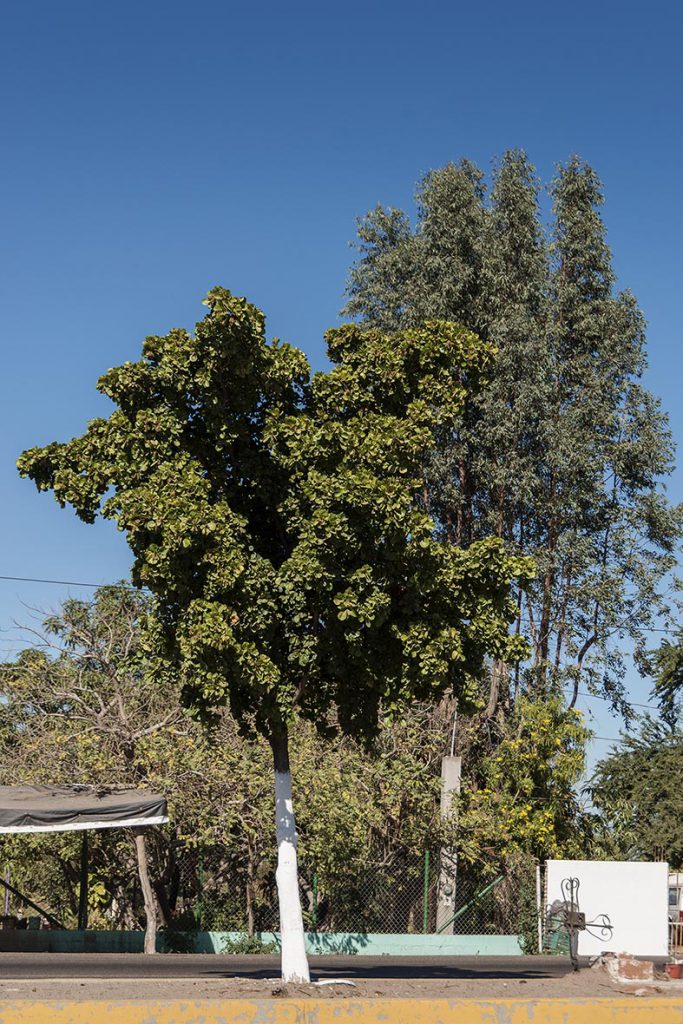 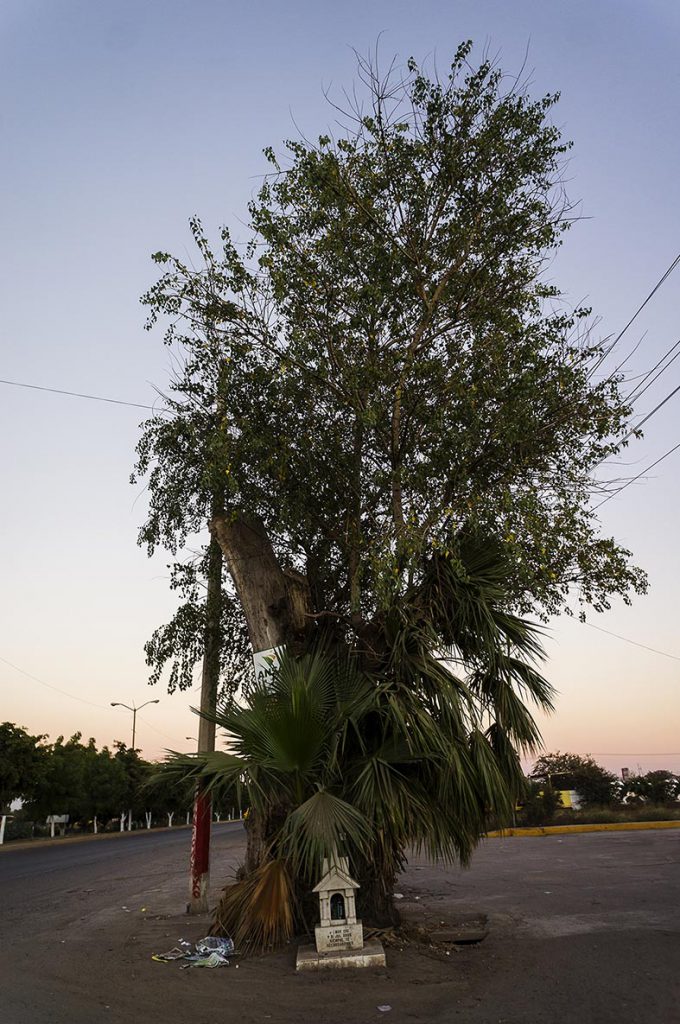 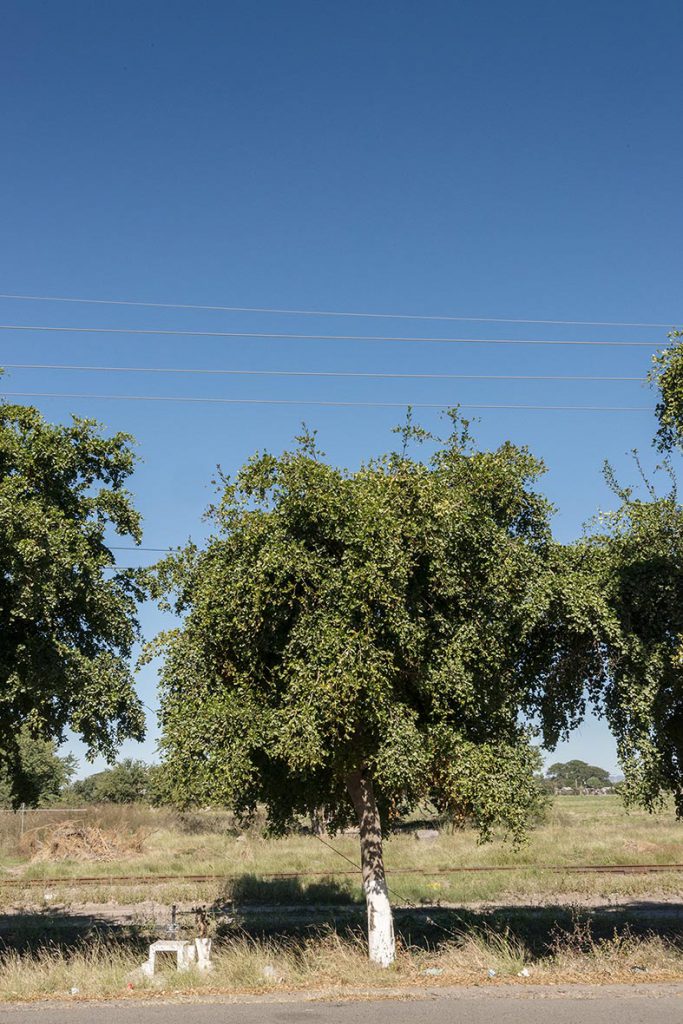 Stretching between San Pedro and the beach in Altata, Sinaloa, there is a 40 km road where there are three invisible borders controlled by rivalling armed groups. There is a price to pay for crossing these territories.

This series of 21 photographs by Teresa Margolles, titled 40 Km, resemble snapshots of peaceful lands, but also bare witness to the reality lived by the local people in this area. Under the control of these groups, the inhabitants surrounding this stretch of road are unable to mobilize; they end up trapped in their original territory, constantly under threat of violence and death, turned into prisoners of a land they used to call their own. The landscape is strewn with altars, each one marking the site where someone was killed. There are more than sixty-five altars for men, women, and children. These names, dates, prayers, and tributes are almost lost in the green countryside, among crops of corn, tomatoes, and mango trees. In this work, Teresa Margolles introduces the viewer to the reality of death and violence, its proximity, and its madness.

40 Km marks an important moment in the artist’s career in which she left behind the explicitness of previous pieces that dealt with systemic violence in Me?xico. In this series the artist’s risk-taking is more nuanced; the photographed territories are dangerous not only to the populations that inhabit them, but to any outside witness, such as the artist, that might want to document them.

Teresa Margolles’s work examines the social causes and consequences of violence. For Margolles, the morgue as a symbol accurately reflects society, particularly that of her home country of México, where deaths caused by drug-related crimes, poverty, political crisis, and the government’s brutal military response have devastated entire communities. Margolles has developed a unique, restrained language in order to speak for her silenced subjects: the victims discounted as ‘collateral damage’ in cold statistics. The landscapes she portrays are specific to México but the themes and conflicts her work brings to the surface are universal, as we witness violence spread across all borders.
Biography
Teresa Margolles
Born 1963, Mexico
Lives in Mexico City/Madrid/Berlin
Details
40 x 30 cm each
Series of 21 C-prints
Related