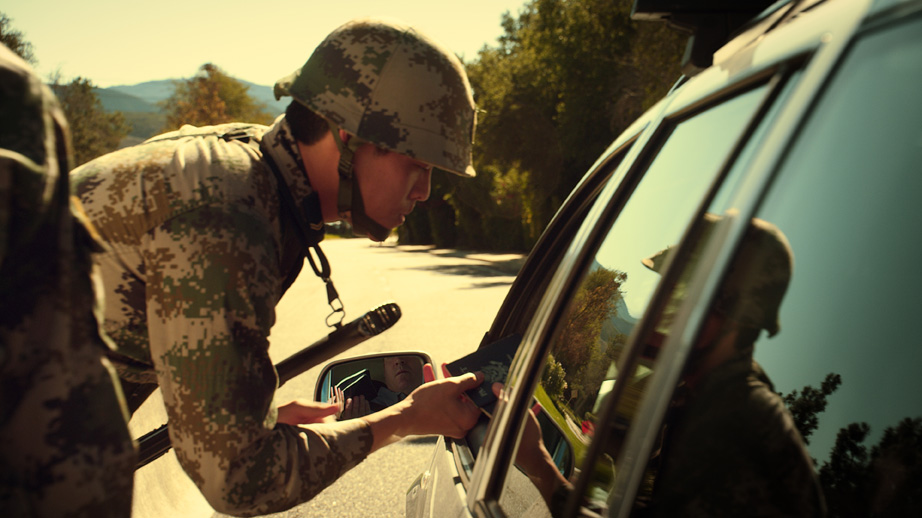 “Watching the films of Omer Fast confounds our expectations of the medium. 5,000 Feet Is the Best, 2011, is presented like a conventional big-budget Hollywood movie and has similarly high production values. Yet Fast frustrates the narrative element that Hollywood teaches us to expect: While stories unfold, repetitions and obscurities challenge the idea of a central controlling account. Ultimately, one is left with the postmodern awareness that there is no truth, no core to cling to.

Different artists have tackled this central tension between medium and matter in film in different ways. Bill Viola and James Coleman slow down movement and image, while Fast’s approach is more in tune with the fractured expositions that James Joyce employed to disrupt the narrative drive of the novel. The film, which has been playing simultaneously at the Venice Biennale, Dublin Contemporary, and The Model, takes as its subject the drone pilots who remotely operate bomber planes over Afghanistan while working nine-to-five days at their bases in the United States.

The production values are slick, almost to the point of parody, reflecting the aesthetics of blockbuster movies and of those highly glossy prerecession artworks (think of Jeff Koons and his Hanging Heart, 1994–2006) in a way that feels at odds with the content of the film. Nevertheless, Fast’s anti-narrative devices bring about an uncomfortable level of anxiety and perplexed anticipation as we are caught between our expectations of story and what is actually playing out on-screen. These are mirrored in the second installation on view at the Model, Nostalgia, 2009. Nothing seems to make sense as it unfolds, and yet at the end, even though no conclusive story has been told, a greater understanding of humanity appears to have been reached.”
— Gemma Tipton, Artforum

In his videos and installations, Omer Fast links and merges personal stories, collective history reality and fiction as well as experience and one's making of it. Fast is interested in different types of discourse carried out in contemporary political and social events. In the work CNN concatenated (2002), for instance, an American journalist's speech is modified to deliver a different meaning. Omer Fast was born in 1972 in Jerusalem, Israel. He lives and works in Berlin.
Biography
Omer Fast
Born 1972, Israel
Details
30 minutes
KADIST VIDEO LIBRARY
Login to watch video
Related