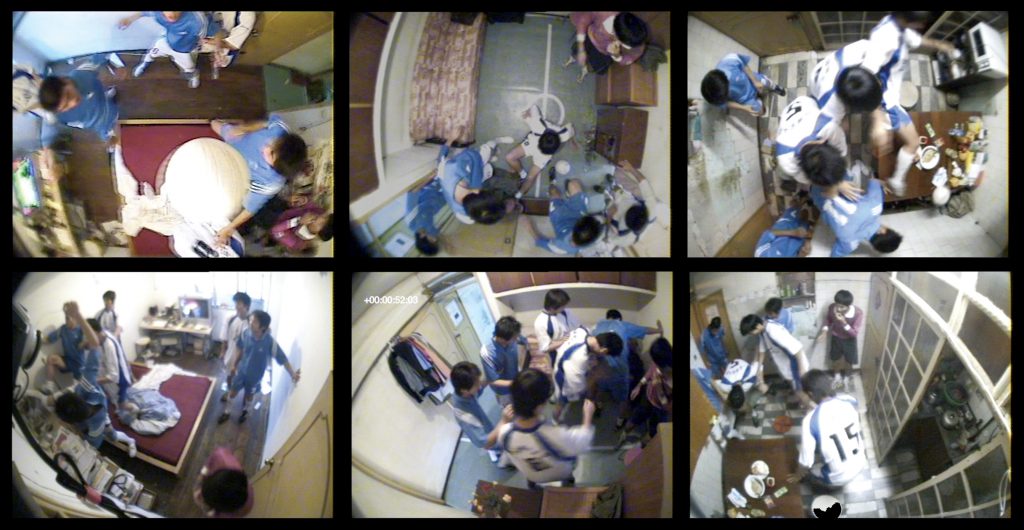 603 Football Field presents a soccer game played inside a small student apartment in Shanghai. Installed like monitors fed by surveillance cameras, the videos present a voyeuristic entry into a private space, where two teams of men are scurrying around a bed, a desk, and some shelves in to score a goal, represented by a kitchen at one end and bathroom at the other. The game is furnished with complete uniforms, a referee, and a midfield line. Initially, the game appears as a whimsical solution to urban ennui. Yet, as the players shuffle the ball around, recklessly knocking down items in the apartment, the viewer begins to wonder if the indoor game marks the increase of air pollution, and the erasure of green space by real estate development has forced all leisure activity to be conducted in the prison of one’s apartment under surveillance.

Zhang Qing is a conceptual artist living and working in Shanghai after graduating from the Changzhou Institute of Technology. Zhang’s works deploy a variety of motifs and styles, at times dabbling in gender-bending photography and engaging in endurance-performances. Particularly, Zhang uses humor as an access point to expose the darker sides of capitalism in works such as Don’t Go So Fast (2009), social commentary on the state of economic disparity among social classes. His recent video installation and mixed media works has developed a sophisticated videographic language, exemplified by CCTV(2011) to address issues of state media, surveillance and privacy. Zhang considers China’s socio-political challenges to be unique to its own cultural-historical background and do not always translate or transfer well into foreign contexts. Thus, contemporary Chinese art can provide special visual entries into these complex socio-economic situations.
Biography
Qing Zhang
Born 1977
KADIST VIDEO LIBRARY
Login to watch video
Related