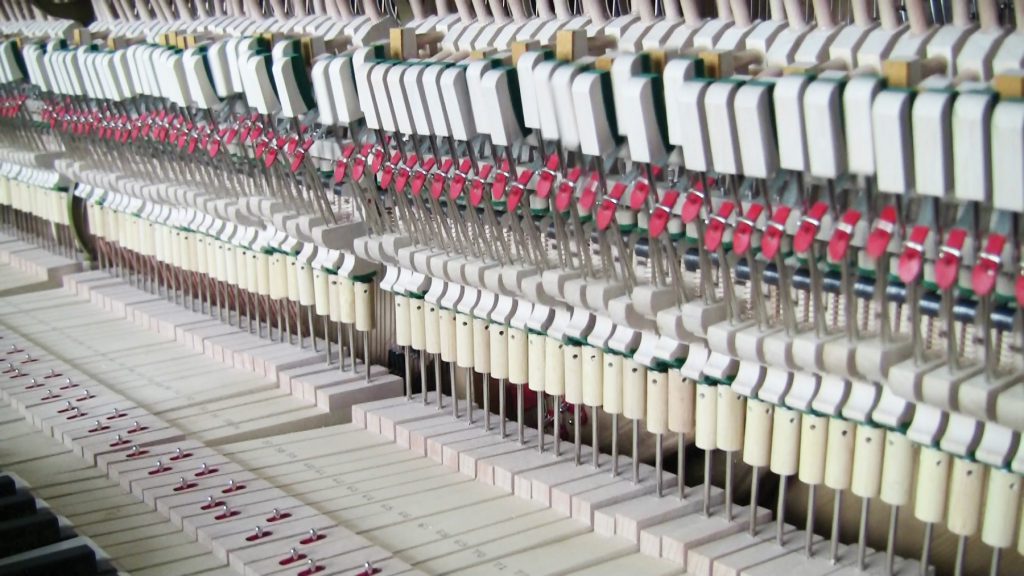 The video 9000 PIECES by Euan Macdonald was filmed at a musical instrument factory in Shanghai where 90 percent of the pianos that they manufacture are exported around the world, and only 10 percent are “finished” and can be labeled “Made in the US (or) Europe.” The video captures an intricate network of mechanisms as they interact with each other, their rhythmic movements resulting in an intense choreography and a cacophony of metallic sounds dramatized by Macdonald’s editing. As the shot widens it reveals the process we see unfold: a piano being vigorously tested by a factory machine designed to determine the endurance of the instruments. Contrary to what is often relayed, the work has nothing to do with Chinese factories or fast changing global economies. As described by Macdonald “it’s about the way information is perceived and put together through the connection of looking at different parts of something, and then accumulating them into a larger image.” Perception and temporality are tempered with as the artist directs our focus from the micro to the macro, from the parts to their sum.

Euan Macdonald’s videos, drawings and sculptures are informed by a wide array of philosophical, musical, and literary references, but return repeatedly to the quotidian occurrence, the everyday as subject. Slowness and stillness are set against the relentless race of the cinematic spectacle. Many of his videos present a single conceptual mechanism: art as a machine that proceeds with its own logic, at its own pace, until its operation is complete. But they proceed with a kind of uncertainty, a tension of possible outcomes—a viewers attention shifting between the concrete and the abstract. Macdonald is interested in art that "causes problems and resists academic rationale," seeing "indeterminacy as an affirmation."
Biography
Euan Macdonald
Born 1965, UK
Lives in Los Angeles
Details
5:00 minutes
Single-channel, color, sound
KADIST VIDEO LIBRARY
Login to watch video
Related