Akram Zaatari
A girl and her brother. Studio Sherazade. 1960s 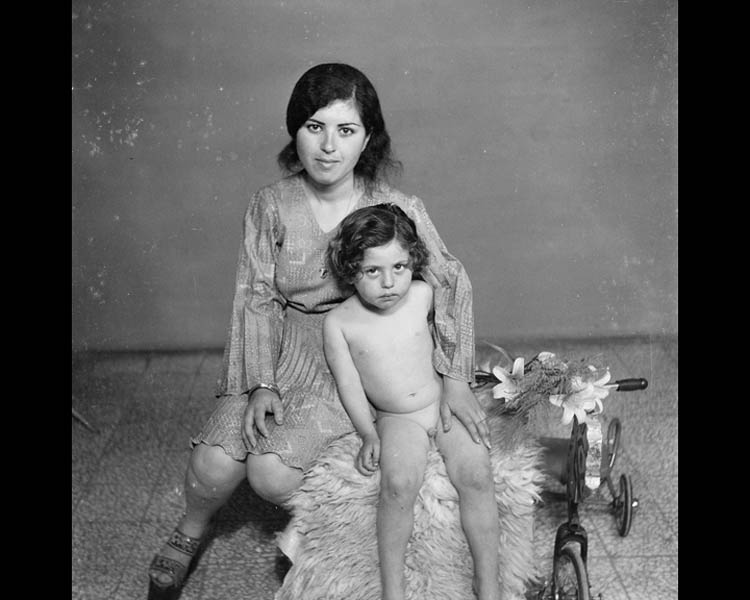 “When you position your hand on someone’s shoulder, your shoulders become straight and horizontal. Placing one’s hand on a stable surface helps position the shoulders and the general posture of the body.” Hashem El Madani.
Hashem El Madani, a studio photographer in Saida, began working in 1948. Like all studio photographers his subjects came to him. The studio was a constant flux of visitors. It was perceived as a safe haven, where the subjects of his photographs could act out their fantasies within the conventional format of portrait photography.
Madani records the poses, clothes and behaviour of his clients reflecting the social and political context in which they lived as well as the norms and the taboos. He portrays anonymous personages, people who normally fall below the radar of public interest.

Zaatari combines the skills of a historian, a curator and an artist. He is interested in salvaging and preserving the past, in challenging the perceived norms of history. 'Diversity is the most important factor in resisting misrepresentation' he stated. 'Focusing on iniduality thus becomes a political mission.' Akram Zaatari was born in 1966 in Saida, Lebanon. He lives and works in Beirut.
Biography
Akram Zaatari
Born 1966, Lebanon
Lives in Beirut
Details
29 x 29 cm
Photograph
Related
A Guest Without A Host Is A Ghost, International
Akram Zaatari, Conversation with an Imagined Israeli Filmmaker Named Avi Mograbi, Paris
Akram Zaatari, Paris