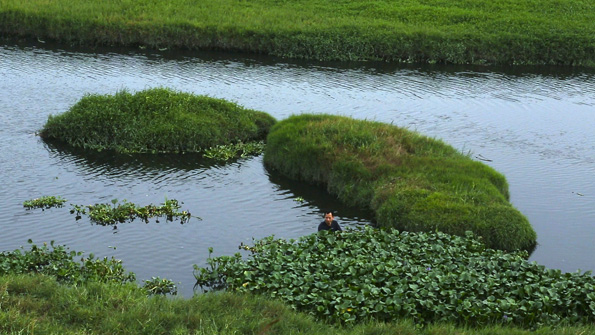 After Reality is a video by Zhou Tao, which was born out of his residency with the Kadist Foundation in Paris in 2012-13. Prior to arriving to the residency, the artist had begun filming in in Guangzhou, China, capturing footage of the lush vegetation from the semi-wild and semi-urbanized zones of Guangzhou’s urban fringe and a group of Dragon Boat rowers training in the adjacent river. As he arrived in Paris, he was confronted with the radical difference with which Europeans arrange and organize environments: the highly manicured cityscapes of Paris in stark contrast with the overgrown abundance of Guangzhou. Using the notion of “geometrical editing” Zhou Tao then worked to incorporate images shot in Paris to his previous editing, focusing on the idea of continuity in between spaces as means to create a third, imaginary space through film. Adding another layer of complexity, Zhou Tao also subtly appears performing in the footage among the scenes of rowers and farmers going by — either walking at a slightly slower pace behind them or assuming difficult stances amid the luxuriant vegetation. The result is a film that is untethered to space and confronts us to a kind of unhistorical time where background and stage, viewer and actor, fact and story line, documentation and representation are all superimposed interchanged. creating an alchemy that transforms ordinary surroundings into a theatre of mystery and wonder, which are rare to find.

There is no single entry to the practice of Zhou Tao, who combines video with photographs, drawings and built environments to challenge our perception of any singular or real narrative or space. Through subtle and humorous interactions with people, objects, and environments, and through an intuitive editing process that creates a montage of scenes from various locations to appear as one, Zhou Tao’s videos invite us to experience the multiple trajectories of reality—what he calls the “folding scenario” or the “zone with folds.” The spaces he depicts are often transitional or in between: edges of roads, a concrete underpass beneath a bridge, overgrown plants in forgotten areas inside cities are often the protagonists. Also focusing on the communities that inhabit these spaces, his work lacks narrative but is instead rooted in the gaze of his lens, moving around nature, urban scapes and their dwellers, almost as a form of documentary. For him, the use of video is not a deliberate choice of artistic language or medium, instead the operation of the camera is a way of being that blends itself with everyday life. As the artist describes it he is influenced by a consciousness in performance which is then viewed through the moving image: “my relationship with reality and with the filmed image.” In his thoughtful and speculative approach his camera is not simply a recording apparatus but an extension of his existence and his active participation in the environments. The images it produces are not just detached spectacles: they are the agents that reveal the theatrical details suffused in mundane life.
Biography
Zhou Tao
Born 1976, China
Details
13:10 minutes
HD video & 18 photographs (about 21 x 28 cm)
Related
Zhou Tao, Paris
The Training, Paris
Zhou Tao: The Man Who Eats Pigeons, Paris
Zhou Tao, Paris