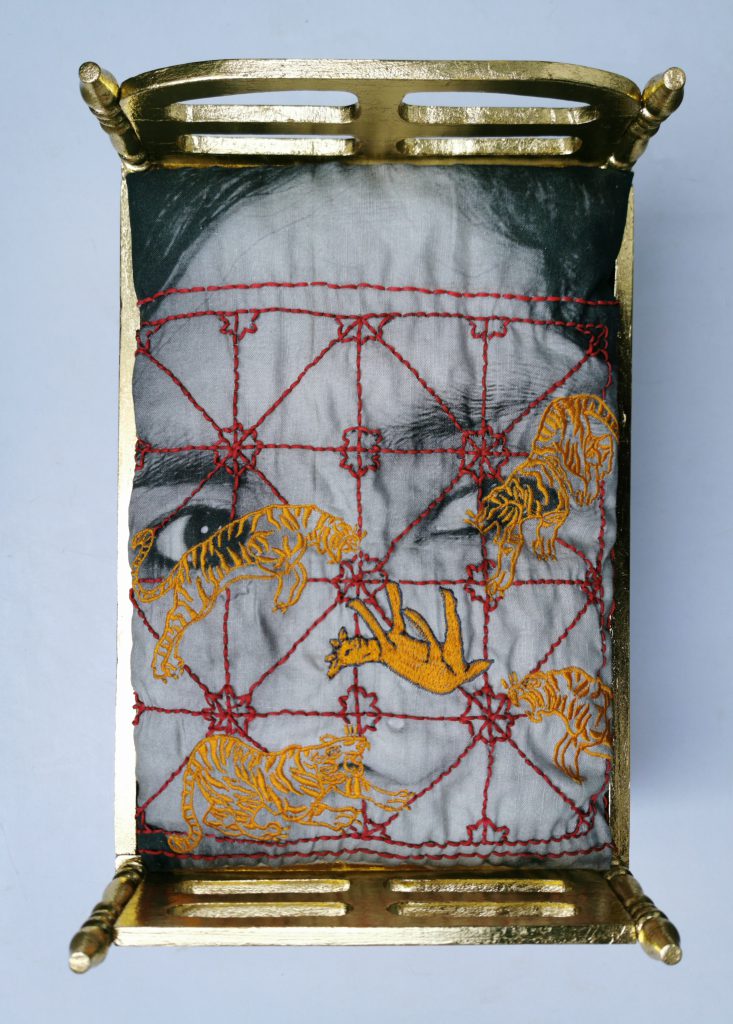 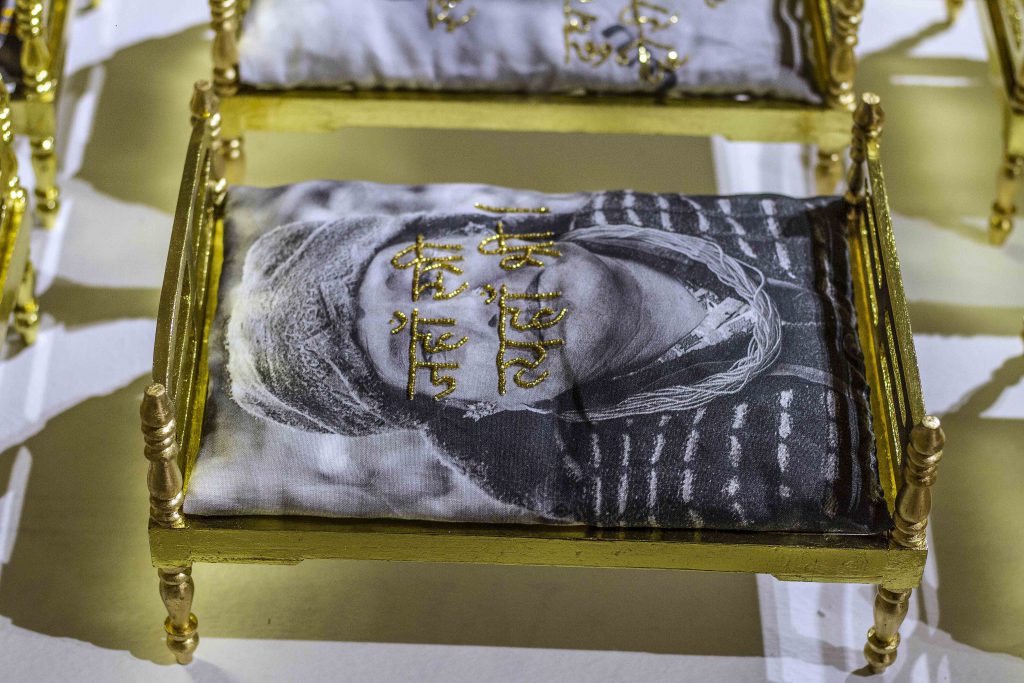 Sheelasha Rajbhandari’s Agony of the New Bed brings out the familiar yet often ignored reality of gender discrimination and taboos built within the construct of marriage. The series of portraits of women from different age groups of Nepal are re-appropriated on cotton mattress placed on miniature golden matrimonial beds. The scribbles, texts and metaphorical images on the portraits embroidered with golden threads are representations of the range of vulnerable and resilient emotions experienced by females and the social beliefs towards them.

Gold is an obsessive compulsion in lot of Asian marriages both socially and culturally. Marriage is celebrated with the exchanges of costly gifts and gatherings. Brides are decorated with gold and other precious jewelry along with shiny red & golden clothes. But this sparkly glittery cultures are also hiding/ altering bride’s identities. Like many other countries, in the traditional marriage system of Nepal, ownership of a daughter is transferred from a father to a husband. Brides are socially forced to shift their identities and adopt their husbands’, just like they are made to abandon their own natal house & surname and adopt their husbands’. Men do not have to go through such identity alteration. This practice has contributed to the preference of sons over daughters, as daughters are supposed to go to the ‘other’s’ place and sons continue the family lineage.

From early age females are trained to be subservient, loyal wife & mother and be perfect in her ‘duty’ of managing household chores. After marriage female’s sentiments/responsibility towards her natal parents and matters like her career are supposed to be secondary. In the country where it is challenging even for high achieving working women, there is an alarming number of early, child and forced marriage. Numerous social research has documented the fact that a high proportion of married females (as opposed to those unmarried) become victims of domestic and sexual violence. Marital rape and women having little or no power over their reproductive rights are not uncommon. These factors have contributed to the development of mental health problems like depression, anxiety disorders and suicidal tendencies. Despite these challenges women have resisted, developed their coping mechanisms and fought against the unjust in their own ways.

Sheelasha Rajbhandari is a visual artist, cultural organizer, and co-founder of the artist collective Artree Nepal (founded in 2013) based in Kathmandu. She is interested in exploring alternative and plural narratives by learning the value of folktales, folklore, oral histories, mythologies, material culture, performance, and rituals and placing them as evidence, along with references to mainstream history and narratives. Her long term research projects and artistic practice often juxtapose these contradictions and synthesize the knowledge and experiences that result from individual and collective discourses. Through her works, she frequently tries to encounter the simple yet socially forbidden and taboo subject matters, with a focus on women’s struggles, celebrating their resilience. Her recent works explore the current transformation of Nepal from a once important centre for trans-Himalayan trade to a geopolitical situation in flux between the two emerging world powers of India and China. Rajbhandari is very careful about choosing materials and methods that align with her conceptual framework. She prefers mediums and materials that add meaning to ideas and have their own significance.
Biography
Sheelasha Rajbhandari
Born 1988, Nepal
Lives in Kathmandu, Nepal
Details
10 pieces, each: 31.5 x 21.5 x 16.5 cm
Imitation Gold Leaf on wood, Digital print on linen cotton textile, embroidery thread, metal thread, glass beads
Related