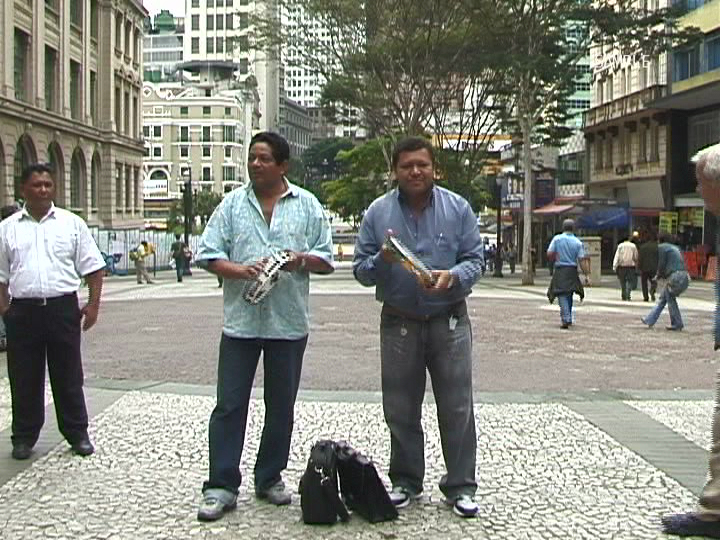 For the two-channel work Asking the Repentistas – Peneira & Sonhador – to remix my octopus works Shimabuku asked two Brazilian street singers to compose a ballad about his previous works with octopi (in which he created traditional Japanese ceramic vessels to catch octopi, with a fisherman who took him on his boat to test them out as we can see on one of the channel). In the Brazilian singers’ ballad, Shimabuku is transformed into a fisherman, the greatest fisherman in Japan, but a kindly fisherman who returns his catch to the sea. The artwork thus becomes facilitator for an interaction between different cultures and interpretations.

Born in 1969 in Kobe, Shimabuku is an artist who collects unusual encounters. When he was younger, he wanted to become a poet or tourist guide. Today he is an artist, producer and smuggler of stories, customs and myths which he observes and collects on his journeys. Taking on the role of a Candide-like figure, Shimabuku travels the world, interacts with strangers, and converses with nature, instigating moments of poetry, humor, and wonderment, but also creating bridges between the specificities of different cultures and localities (nowadays a relevant position, considering our global world as a made up of a multitude of localities). Each of his works (including videos, sculptural installations, performance documentations, and photography) tells the story of these improbable encounters across borders, species, and states of being. This artist experiments all kinds of interaction, pushing back the limits of the physics and the imaginary.
Biography
Shimabuku
Born 1969, Japan
Lives in Naha, Okinawa
Details
16:43 minutes looped
2 channel video installation, DVD color, sound
Related