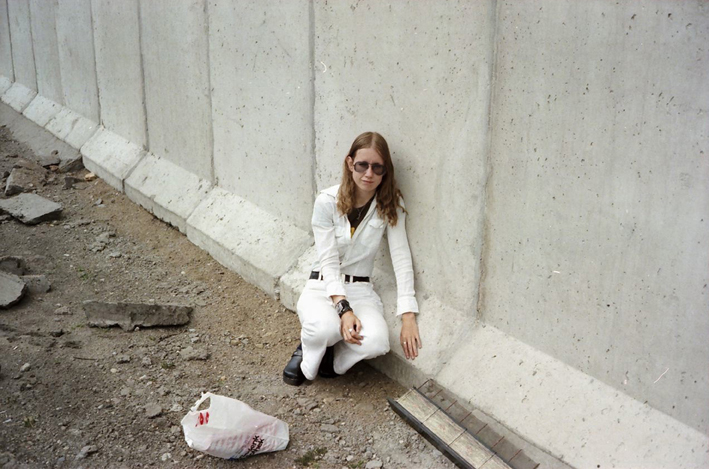 Eija Riitta was born in 1954 in Liden, Sweden, and is “objectum-sexual.” Since June 17, 1979, her name is Eija Riitta Berliner Mauer taking the name of her husband, the Berlin Wall. In animism all elements of nature are considered as alive and have souls.  “Objectum-sexuality” is an extension of this belief. Eija’s blog explains the situation perfectly – her attraction to rectangular parallel lines, constructions such as bridges, fences or the Berlin Wall. Furthermore, this can be witnessed at her house, now the “Museum of models and guillotines,” a subject that she is equally passionate about. More than a documentary on the subject, Lars Laumann filmed the encounter between two lovers of the Berlin Wall. In the video, we come to realize that the first woman married the wall before the war, clinging to the memory of what it was, while the second fell in love with the Berlin Wall after its destruction. Surprisingly, these women do not consider the wall as a symbol of political history, but more as an independent object of history. The first woman fell love with the wall for its lines, its strength, its breadth, while the other for its colors, its fragmentation, and its fragility. In presenting this film in an artistic context, Laumann makes a surprising parallel between “objectum-sexuality” and art. To contemplate a work for its formal aspects, refers to Eija’s speech which considers the Berlin Wall as a free being, without any responsibility of which he is charged. Thus, the destruction of the wall, as Eija claims, is as an act of barbarism, of an innocent person.

The films of Lars Laumann incorporate codes of documentary, grappling with topics at the limits of fiction. This process of fictional documentary recalls the practices some artists in the Kadist collection like Omer Fast, Joachim Koester, John Menick, Akram Zaatari, Arthur Zmijewski. In 2007, Matthew Higgs presented, at White Columns Gallery (New York), Laumann's first film, "Morrissey Foretelling the Death of Diana" which claims that the Smiths album "Queen is Dead" produced in 1986, announces the death of Princess Diana in 1997 in Paris. Illustrated in a film montage, the narrator's discourse draws parallels between the surprising words belonging to pop culture and events that occurred years later. Lars Laumann's analysis takes as a starting point the iconic figure of Diana, and develops a "conspiracy theory" by claiming extraterrestrial involvement in those events, thus offering a vision of a world entirely controlled.
Lars Laumann was born in 1975 in Brønnøysund, Norway. He lives and works in Berlin.