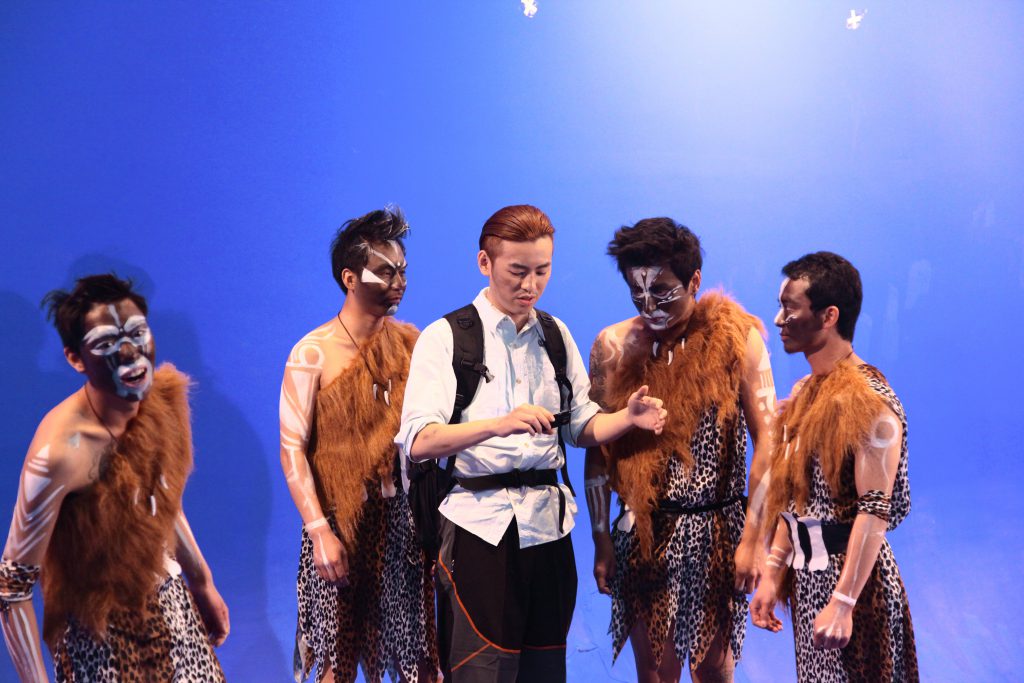 In his video work Beyond Geography, Li dramatizes the role of the artist-as-imitator to the point of sheer parody. Dressed to toe in the costume of a typical Discovery Channel adventurer-explorer, the artist dashes suavely through the uncharted jungle habitat of a primitive tribe. Li modulates his own voice in laughably accurate mimicry of the dubbed Discovery Channel protagonist familiar to Chinese viewership, daringly gulping fresh water from a river, expertly admiring exotic vegetation, and whimpering in fear of the dark sounds of the night (screaming, even, as he trips on a human skull) in an full-scale exaggeration of a nature show personality. None of these settings, however, is shot on “location” as the video takes place entirely in an empty 3-D digital film studio with a blue screen. Engaging in a near Brechtian conceit, Li deliberately keeps the studio space raw in order to remind us that these television programs are always deliberately artificial and produced. His project is entirely farcical, and just as there are not sets or props to lure the viewer into complacency, Li’s interactions with the indigenous tribesmen – whom Li “discovers” – becomes their own simulated performance of colonial appropriation and meetings of “first contact.” This narrative of appropriation carries throughout until, near the video’s end, Li (in full explorer persona) begins to make declarations about the tribe’s civilization, decreeing their cave paintings (never seen on camera) as masterpieces on par with Picasso and Mondrian. In assuming the guise of the pedantic academic, Li ends his video with a humorously condescending twist. At the same time, his video reminds us of the inherent dangers of confusing mediated representation with documentary while reminding us of the constant threat of cultural appropriation at play when we fail to see the blue screen for the the jungle and the artist for the explorer.

Li Ran produces video, installation, and performance-based works that examine various states of parody and simulacra in the digital world. Through performative narrative, reproduction, mimicry, and satire, Li Ran’s work straddles the line between fact and fiction in playful explorations of the meaning and making of truth. Li’s describes his own artwork with the language of architecture: that if an artwork is a like room, its meaning should be open and porous, not forced against a unilateral interpretation. This virtual-minded analogy is fitting inasmuch as Li’s practice increasingly hinges on the exploration of the non-reality within reality. Born in the Hubei province, his work has been exhibited extensively at international venues such as the Jewish Museum, New York; Contemporary Arts Museum Houston (CAMH), Houston; Musée d’art contemporain de Montréal, Montreal; The Museum of Moscow, Moscow; Institute of Contemporary Arts (ICA), London; Centre d’Art Contemporain Genève, Geneva; and CCA Wattis Institute for Contemporary Arts, San Francisco.
Biography
Li Ran
Born 1986, China
Lives in Shanghai
Details
23:09 minutes
Related
AP: Assembled Personalities, International
Interview with Li Ran, International
Hong Kong: Soil and Stones, Souls and Songs, International
Manila, Philippines: Soil and Stones, Souls and Songs, International
Li Ran: One Man, One Night, San Francisco