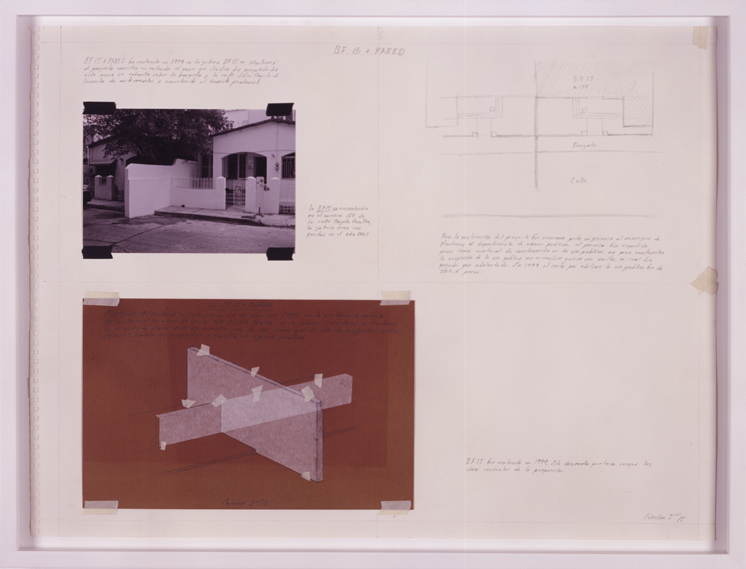 BF15 is a preparatory study for the collective’s intervention at the BF15 gallery in Mexico, near Monterrey. It includes a photograph, a collage, sketches and notes. The intervention consists in the seamless extension of the wall of the BF15 gallery beyond the property boundaries, invading the sidewalk and the street, entering public space. The artists highlight the permeability between public, professional and private space. Through these actions, they question the definition of those notions, and become involved in negotiations, making connections and exchanges. Interrogating the role of each space and its function is central to their work.

Tercerunquinto develops work related to the urban, the boundaries between public and private space. By introducing simple signs or gestures – the construction of a concrete slab, displacement of a portion of bitumen on the side of the road, encroachement of grass on a parking, the three artists interrogate public space as the place of possibilities. Their interventions give users an active status with the power to decide on their own environment. For the Hong Kong architecture biennale, the collective intervened in the exhibition spaces. The intervention consisted in constructing a wall which integrated the word 'Anarchitecture' (anarchy + architecture) by omitting certain bricks. Therefore it was as if the word had perforated the wall. Through the wall, the spectator could see the city and its transformations. Thus the spectator was invited to develop his critical outlook on the environment.
The collective - formed in 1998 - is composed by Julio Castro, born in 1976, Gabriel Cazares, born in 1978, and Rolando Flores, born in 1975. Live and work in Monterrey and Mexico.