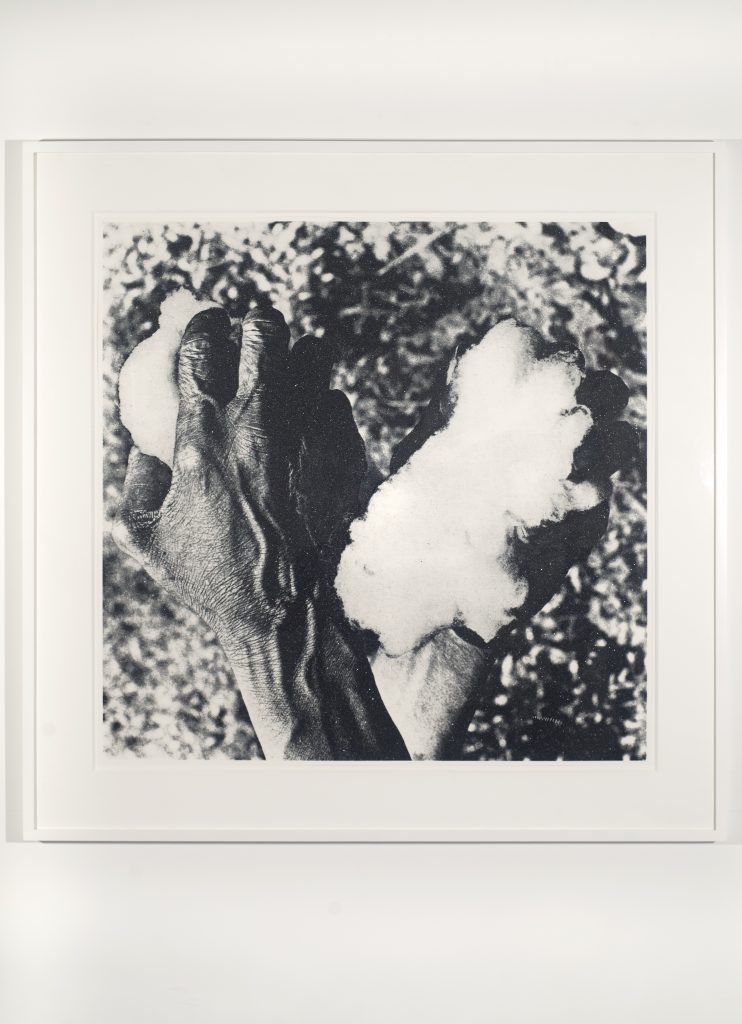 Shot in black and white and printed on a glittery carborundum surface, Black Hands, White Cotton both confronts and abstracts the subject of its title. As with many of his works, the artist has taken a found image and manipulated it to draw out and dramatize the formal contrast between the black hands holding white cotton. Cotton, of course is one of the most familiar fabric sources to us, and becomes incredibly soft once processed. But at the time that it was being planted and picked by slaves in the United States, was severely abrasive and would lacerate the hands of the slaves dramatically. Not to mention the physical labor involved in picking cotton out in the sweltering hot fields for inhumane periods of time, and the frequent physical abuse endured by slaves in the process. This image, culled from the archives of Jive magazine in San Francisco, and blown up to a pixelated scale therefore demands not only that we confront the history of slavery and racism in the US, but does so by presenting a formal contradiction of a material that appears seductive, glamorous, and ornamental, but of a subject that represents extreme violence and oppression.

Employing the visual language and terminology of mass media, and appropriating symbols and images from popular culture, Hank Willis Thomas’ work seeks to question and subvert established definitions and positions with regards to personal identity and the narrative of race. Working across installation, photography, video, and media work, Thomas maintains his photo conceptualist roots, primarily taking source material from found photographs and archives. These images form the basis from which the artist seeks to uncover the fallacies that history claims as truth. His work illustrates how the way history is represented and consumed reinforces generalizations surrounding identity, gender, race and ethnicity, and that as an artist he has an opportunity to expose or to revise those histories from the points of view of the oppressed.
Biography
Hank Willis Thomas
Born 1976, USA
Related