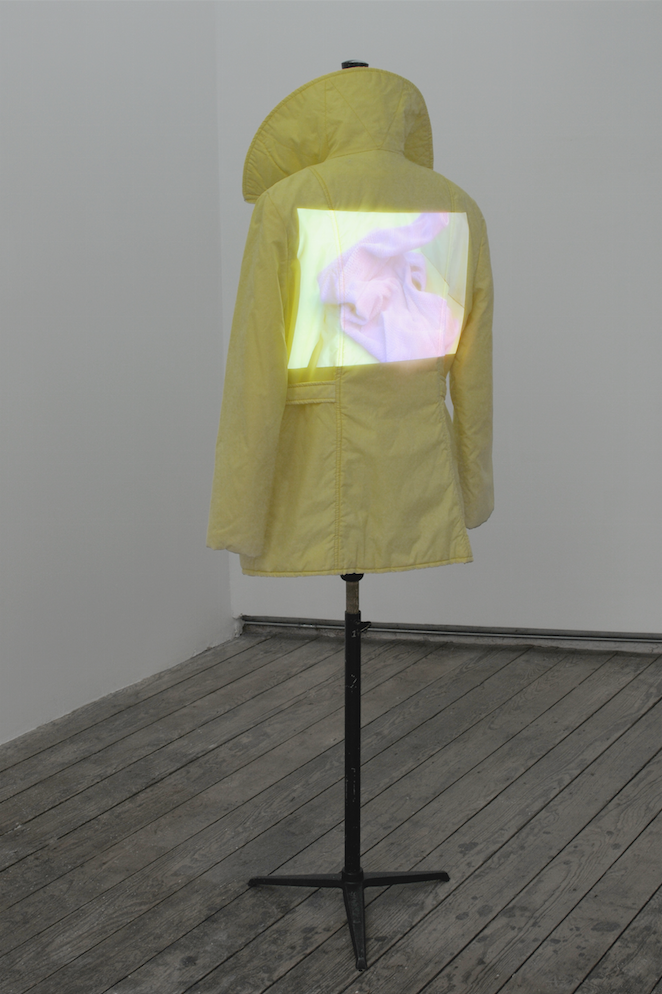 Fashion is the focus of Blood Sugar, which consists of a video projected onto a vintage vinyl jacket set at torso height on a dressmaker’s dummy. As suggested by the work’s title, Cheryl Donegan uses the body as a metaphor, relating the continuous cycle and recycle of images that characterizes consumer fashion culture to the flow of sugar in our blood. Formally, the work borrows strategies from conceptual art, and specifically video art from the 1960s and 1970s—such as the use of repetition, patterns, found materials, and a DIY, low-tech aesthetic—and combines it with contemporary cultural forms, in this case, the world of fashion.

In the video, as runway models emerge and recede into darkness, digitally inserted images of fabric patterns appear, hover across the screen and dissipate to the sound of a repetitive beat. As the video progresses, footage of a child wearing aluminum foil as clothes and another scene with a group of women wearing ornate dresses is overlaid with a collage of images of consumer objects and commercial spaces. The result is a an meditation on fashion’s most essential elements: fabric, the body and the mediated image.

Cheryl Donegan is best known for her performance and video works that deal primarily with ideas of sex, gender, and the ways in which the female body is represented both in art and more broadly across popular culture. During the 1990s, Donegan’s practice was influenced by of a range of movements that brought into question aspects of feminism, identity politics and politically engaged art—the underground feminist hardcore punk movement Riot Girl, and the grunge, slacker, and DIY cultures among them. Donegan often uses her body as an apparatus for mark making, incorporating performative actions that are captured by the camera and that result in or relate to process paintings and drawings. Combining these bodily gestures with found consumer objects and imagery, her works interrogate the conventions of different forms of popular culture such as music videos and advertising, while at the same time considering the politics of self-representation. Most recently, she has continued her exploration of the mediated image, mark marking and its relationship to the body through a series of paintings and sculptures, as well as videos distributed on social media.
Biography
Cheryl Donegan
Born 1962, USA
Details
Video, coat and jacket display
KADIST VIDEO LIBRARY
Login to watch video
Related