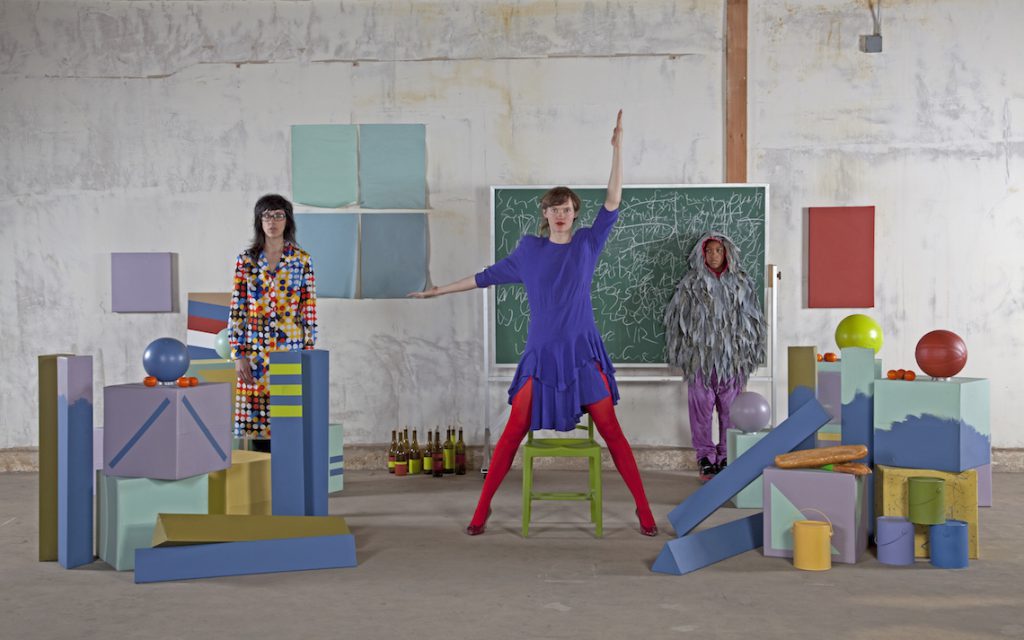 Like several of Mast’s works, B!RDBRA!N (Addendum) is the result of the accumulation of details from the various chapters and formats of an evolving project. The work is comprised by a sculptural set, a text piece that originates from an instructional score, and footage filmed during rehearsals for B!RDBRA!N, a play that was first performed in theaters in Los Angeles.

Originally conceived of as a live response to the legacy of the historical French artist Guy de Cointet, Mast set out to investigate and interrogate Cointet’s work while incorporating the true story of Alex, an African Gray parrot who was the subject of a thirty-year avian language experiment. What interested her was the overlap in the ways that both the artist and the experiment dealt with the imprecision of language and the many ways it can be delivered and understood. For the play she cast a stuntman, a stutterer, a sign-language interpreter, a comedian, a child, an auctioneer, and a theater director, as a way to explore channels of communication in which language is problematic, challenging and/or inappropriate. They perform within a landscape of vivid, colorful forms that are reminiscent of de Cointet’s sets, elementary school classrooms, and minimalist art.

Emily Mast works in the intersection between performance, visual arts, poetry, and theatre. With a keen interest in the world of semiotics, her work often combines signs, symbols, and disciplines in order to deconstruct the conventions governing language and expose their limitations. Her works often have more than one iteration or morph over time: a live performance in a sculptural set might evolve into a film, and later projected onto a slightly different context. With each new version of the work, a varying yet related pathway opens up, allowing her to build up layers of semiotic explorations. In her work Ashes In I’s, for example, through a series of structured notations and improvisation, Mast instructs a chorus of 18 people to perform a piece that incorporates concepts of theater, neuroscience, and social psychology. In the resulting performance, singers alternate between laughter and sad, weeping sounds, evoking concepts such as physical and emotional contagion, crowd behavior, and mob psychology. In another work, The Stage is a Cage, Mast collaborates with a professional dancer to explore aspects of animal impulses, the animal body, and the various ways in which messages can be transmitted without words. As Mast overlays different systems of communication—including sculptural sets, photographs, scores, meditations, formal gestures, the body, movement, light—what results is a surplus of accumulated messages transmitted or lost in translation between the myriad forms. At their core they are a meditation on the material dimension of language, the shades of human comprehension or the lack thereof.
Biography
Emily Mast
Born 1976, USA
Details
7:08 minutes
KADIST VIDEO LIBRARY
Login to watch video
Related