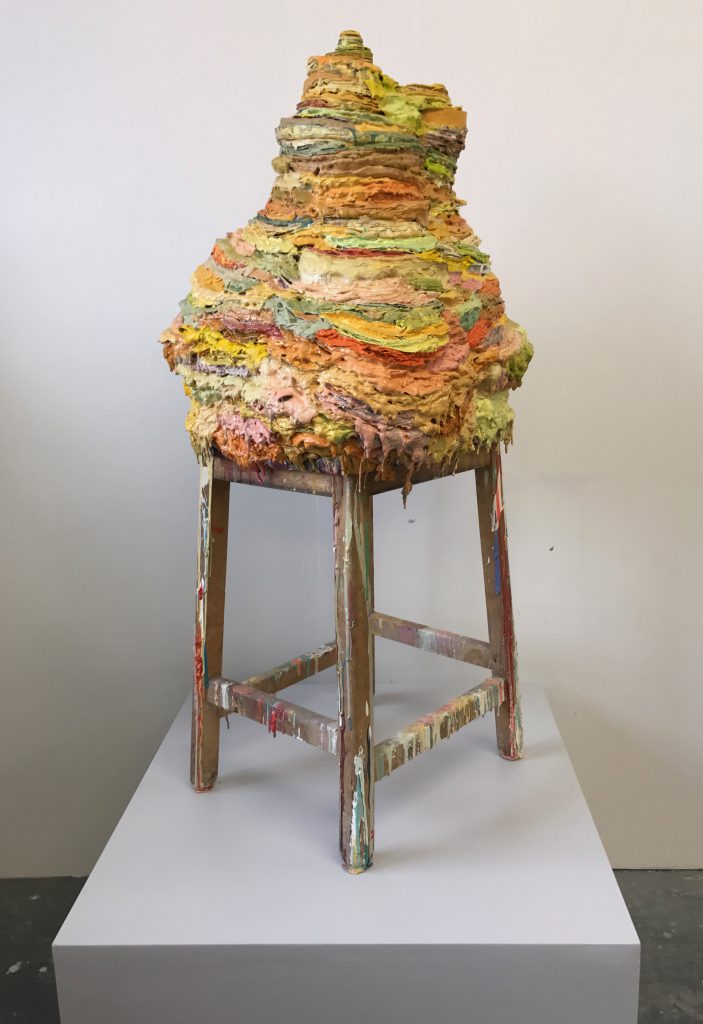 Butter Mountain is part of an ongoing series of works that combines a sense of painterly mass and substance with sculptural language to examine the synergy between a topographical landscape and a landscape of the human condition. The work intentionally alludes to the materiality of the human body and of the land. A stool has been consciously repurposed as a “support”, that by its nature and identity provides evidence of human presence. Paint skins are harvested from tins of domestic and industrial or art paints. These are piled, stacked and manipulated to shape a crumpled fleshy landscape, mirroring the grime of human presence and the materiality of a body of land. The title of this work refers to the name given to an extraordinary bulk of “food-waste” created by a period of blinkered EEC political management of food production, which led to the infamous confrontation between Bob Geldof and Margret Thatcher drawing attention to the issue. These works are formed over time and bear the marks of time in their appearance. The sagging, misshapen form is intended to carry some of the narrative of the work. Themes of mortality and decay, growth and renewal are asserted and cloaked by a corrupted decorative structure surfacing through the substance of the paint. Ekins is interested in developing a confection of degraded beauty, a fugitive relationship between the sublime, the abject, and a contemporary perception of beauty.

Andrew Ekins’ work frequently deals with waste and recycling, using discarded materials to make something new. This in itself is not unusual, but the fact that he uses discarded paint, finishing up ends of cans, as well as discarded furniture differentiates him from other similar artists, for the work becomes a self-reflexive process. He is interested not simply in the alchemical side of this practice, but in the way in which things can slide in entropy, forming their own shapes determined by gravity. Paint becomes a malleable substance in his work, a sculptural material at the same time as a painterly one, dealing with themes related to human existence and abjection.
Biography
Andrew Ekins
England
Lives in London
Details
100 x 46 x 38 cm
Oil based, acrylic/vinyl based household paints, oil paint, wooden stool
Related