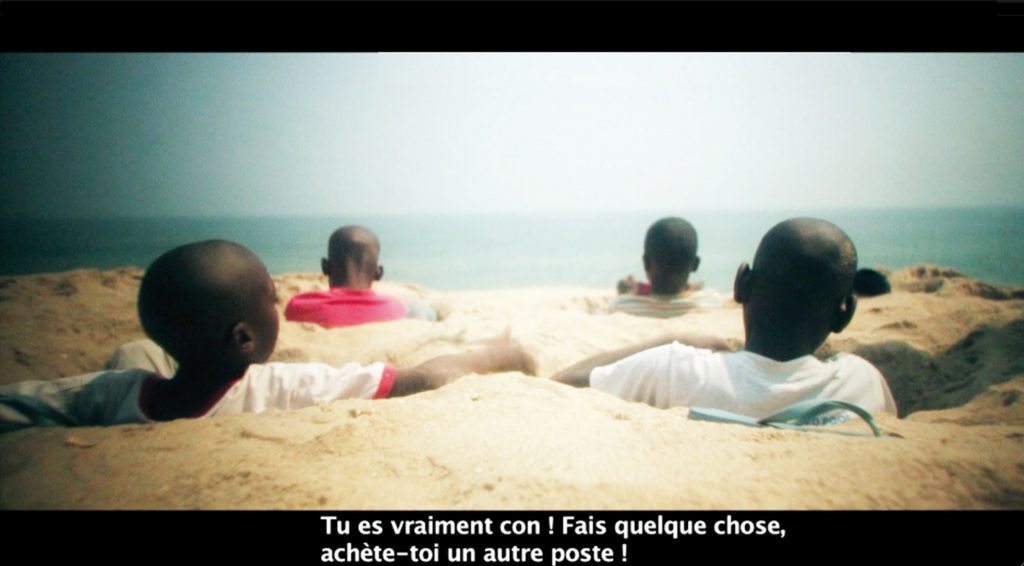 Binelde Hyrcan’s video “Cambeck” is a playful study of four boys on a beach in Angola playing in a chauffeured car made of sand. Weaved through the seemingly naïve game are themes of poverty, migration and inequality. Speaking of ‘the good life’ in the United States of America, the young boys discuss separated families as a result of migration, unemployment and education, poverty, the dream of leaving the slum for a building with walls made not of tin, and the luxury of the accessibility of transport. With the innocence of the conversation in the children’s game, the harsh realities of the developing world speak loudly. The artist’s decision to include the voice of the child speaks both to the importance of imagination in survival in the face of major social, economic and political disadvantage and to the generations of children faced with the hardship of poverty and life in a war zone. Imagination and dreaming is a method of endurance and future reparation of the trauma of social devastation. “Cambeck”, playful in its presentation and uncompromising in its delivery, is a significant insight into to the realities lived by the youth in the ongoing Angolan Civil War context.

Growing up during the Angolan Civil War, Binelde Hyrcan (b. 1983, Luanda, Angola) crosses themes of power, poverty, migration and inequality in his painting, sculptural, design, film and performative practice. The artists hard-hitting themes are delicately negotiated with humor, a seductive method of confronting the troubling realities of developing countries, and in particular Angola. The artist’s contribution to the dialogue surrounding the present refugee crisis provides an important perspective of the countries in question and the journey for a better life.
Biography
Binelde Hyrcan
Born 1983, Angola
Details
2 min 30
HD video
Related
Shanghai, China: On Struggling to Remain Present When You Want to Disappear, International