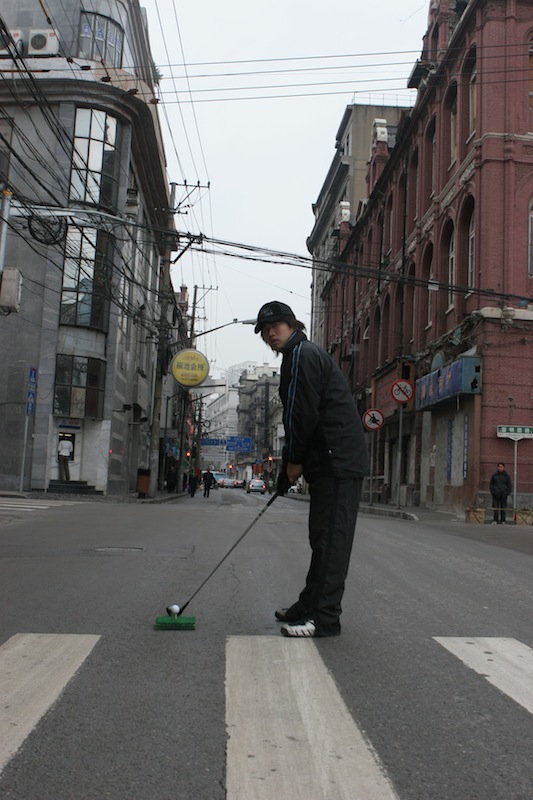 In City Golf (2008) the artist Gao Mingyan films himself playing 18 “holes” of golf throughout the mega-city of Shanghai. For each hole, Gao traveled to significant places from his memory – his first school, his childhood playground, and his former date hangouts – and proceeded to play a makeshift round of golf at each location. In revisiting locales from his youth, Gao attempts to forge a linear connection between all the important places that comprise a life’s experience, his performative “passing” through each location poetically referencing his own passage through time. Gao’s project, however, raises deeper questions about transgression. In order to construct these temporary “holes,” Gao has to willing subvert how these locations function as public site, a significant intervention of private will into a communal space in a country, China, where the tensions between private/public are decidedly political.

Gao Mingyan produces video based-works that examine the political and epistemological violence of our contemporary moment. While his work may seem to document the everyday and mundane, he is decidedly interested in how the dissemination of popular media affects our perception of social tensions and anxieties. His practice stems from the belief that our contemporary moment is defined by a constant state of warfare in which epistemological forms of political and economic warfare inflict as much harm as live ammunition. His work, by extension, considers how even our physical movements throughout social space can be marked as forms of trespass.
Biography
Gao Mingyan
Born 1983, China
Related
Power Forward, San Francisco
Gao Mingyan interview, International