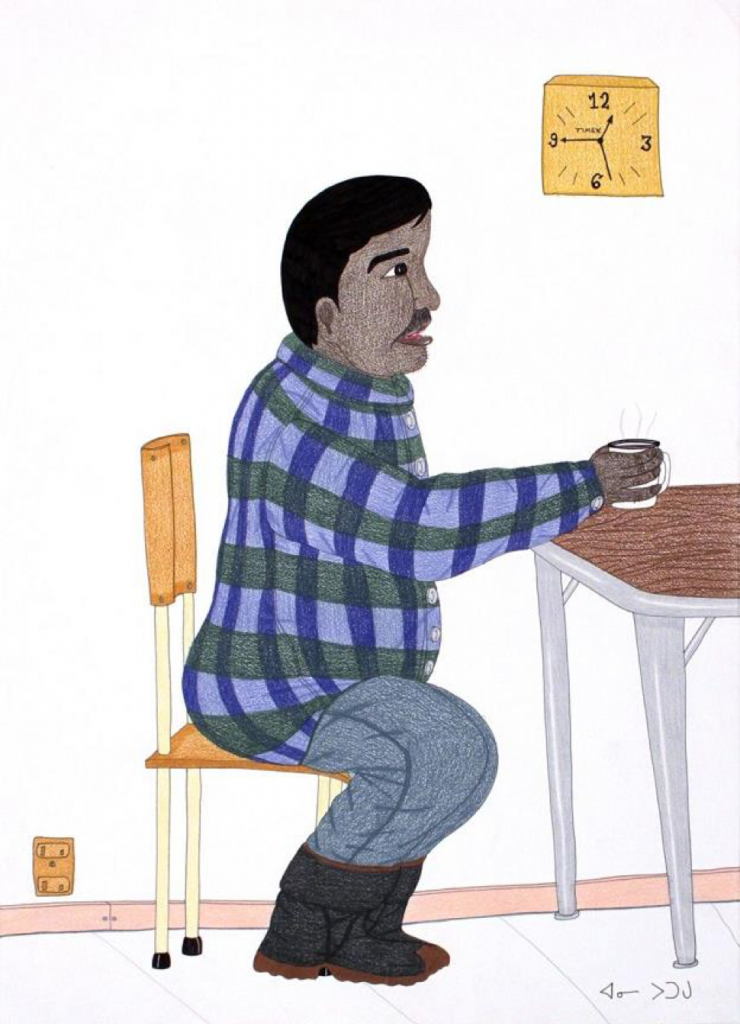 Annie Pootoogook created COMPOSITION (EEGYVUDLUK DRINKING TEA) at a pivotal moment in her career. The drawing depicts her father Eegyvudluk Pootoogook, an Inuk printmaker and stone sculptor who died in 2000. Kin and kinship figure prominently in the artist’s work: Annie was the daughter of Napachie Pootoogook, a skilled draftswoman, and the granddaughter of renowned artist Pitseolak Ashoona. When Pitseolak was bedridden in her final years, her granddaughter would visit and watch her work; the senior artist told young Annie that one day she too would draw.

Preferring to work alone in her home, Pootoogook approached each of her drawings methodically, outlining forms in graphite before building up details in black ink and filling areas of positive space with brightly colored pencils. Her images reflect a diaristic impulse and are indicative of the Inuit concept of sulijuk, which means ‘true’ or ‘real’. Adding prosaic details such as a clock and electrical socket to her intimate domestic interior, the artist depicts her father in a quiet moment. Seated at a folding table, his hands wrapped around a hot mug of tea, Eegyvudluk gazes forward, his attention captured by something or someone beyond the right edge of the composition. In its realism and immediacy, Pootoogook’s scene is at odds with the traditional outdoor subject matter that many have come to expect from Inuit art. With a singular clarity of vision, the artist depicts an everyday event in modern Inuit life, as she saw it.

An instinctive chronicler of her generation, Annie Pootoogook hailed from a long line of artists in Cape Dorset (known today as Kinngait), Nunavut. She began drawing in 1997 under the encouragement of the West Baffin Eskimo Cooperative in Kinngait. Within a decade, Pootoogook became the catalyst for an explosion of creativity originating from Kinngait Studios. Challenging conventional expectations of ‘Inuit’ graphic art which had favoured depictions of Arctic wildlife and indigenous hunting practices, she created works peppered with images of daily life in her community: from waiting in line at the grocery store to sharing meals and watching reality television with her family. Among her most arresting and personal works are those depicting moments of intimate eroticism as well as emotional grief, domestic violence, and substance abuse. Her immediate success drew the attention of a broad cross-section of art collectors; more importantly, it signaled to fellow artists in the North that there were no longer limits to subject matter and scale. Rather than representing scenes of timeless nomadic existence from an era before colonial settlement, Pootoogook’s images reflected the immediate conditions of her life as an indigenous woman artist working in contemporary Canada.
Biography
Annie Pootoogook
Born 1969, Canada
Lived in Cape Dorset, Canada
Died 2016
Details
55.88 x 76.2 cm.
Coloured pencil and ink on paper
Related