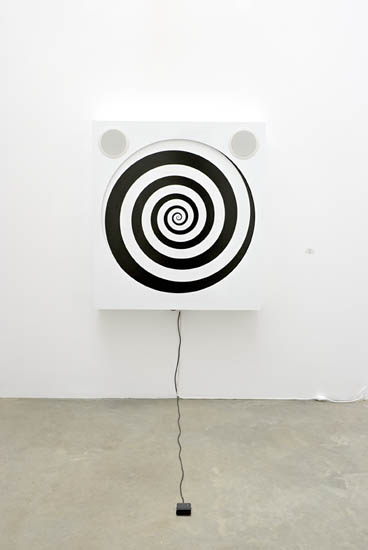 Coué 1 is an animated sculpture that hypnotically highlights the self-motivating leitmotiv of the ‘Coué Method’: “Every day, in every way, I’m getting better and better.”This is the mantra that is repeated by different male and female voices in the soundtrack – first in an incomprehensible painfully slow slur, becoming clear and speeding up into a drilling hilarious sounding high pitching spin, as if helium had been inhaled. This work was commissioned by the Association GEF Psy in Nancy under the aegis of the Fondation de France in order to commemorate Emile Coué (1857-1926) who was a French behavioral psychologist and pharmacist who particularly studied the effects of positive thinking. Séchas also created a Monument to Jacques Lacan in 2002 featuring the cat, his house-style character.
Through direct bodily experience, the spiraling apparatus is supposed to trap the spectator into seeing and hearing with direct reference to Marcel Duchamp’s Anemic Cinema and Rotoreliefs from the late 1920s and 1930s.
It was initially shown in Séchas’ solo show “Magic Slates” (Galerie Chantal Crousel, Paris) in with an accompanying catalogue: “For Coué, French precursor to American Positivism, the spiral of kinetic art that allows for the reuniting in one and the same unity progress in art and faith in individual development, producing an art that supports you and pushes you into sweet folly.”

Alain Séchas was born in 1955 in Colombes, France. He lives and works in Paris.