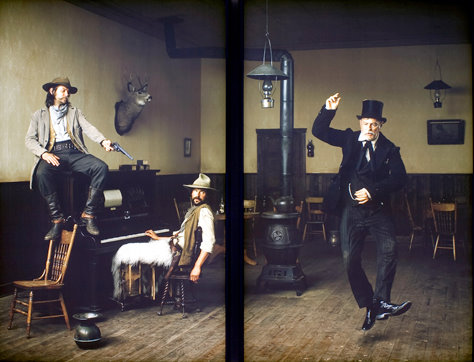 Dance!!!!! continues Graham’s long-standing fascination with the myth of the American West, an idea he investigates through its prevalence in movies, music, and legends. Here, the artist recreates the familiar, hackneyed saloon scene from Hollywood Westerns in which a man—played by Graham himself—is forced to “dance” because bullets are being shot at his feet. Considered a “staged photograph,” Dance!!! reenacts and isolates a culturally repetitive “event.” In doing so, Graham is able to falsify personal experience thus questioning the “true” origin of every Western scene held in our collective cultural memory.