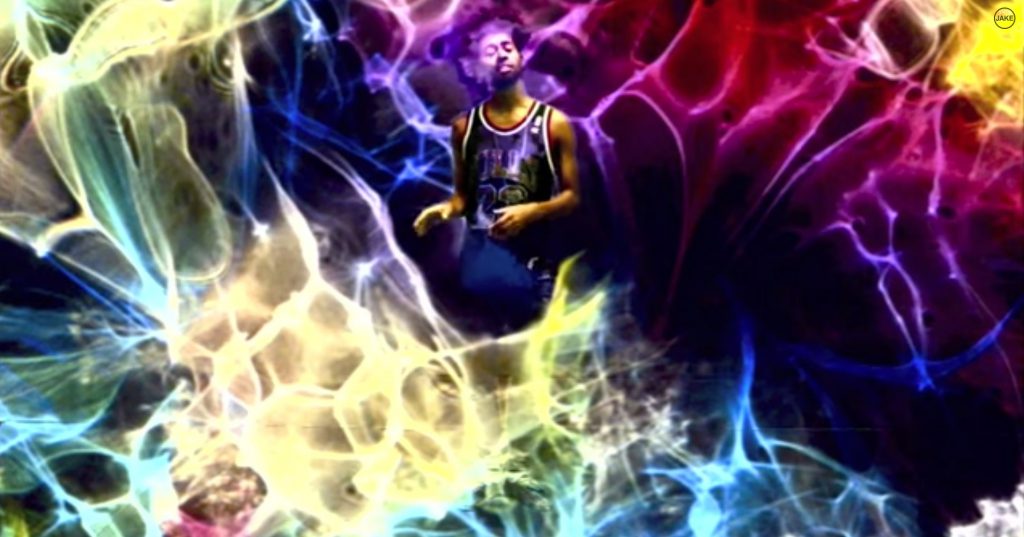 As the video Datamosh begins to play, Yung Jake emerges out of a colorful, smoke-like background and breaks into rap. Malfunctioning green screens and pixelated digital mash-ups bleed into each other in a parody of the music video trope and specifically of the trend of ‘datamoshing’—a digital technique commonly used across this genre.

The song’s lyrics distinctly borrow from the lexicon of rap, combining mentions of clubs, money and fame, with self-referential and humorous lines that literally describe the way in which the artist subverts the medium. A series of references—such as artist David O’Reilly who allegedly claims to be the first person to use a datamoshing effect, or Ryder Ripps an up-and-coming web artist—point to the history of datamoshing specifically in the realm of contemporary video art.

Yung Jake is a visual artist and YouTube rapper based in Los Angeles whose work fuses new media, music, and art. Deeply rooted in a millennial zero, his practice incorporates the vernaculars of social media, internet and rap culture, and combines them through a playful use—or misuse—of digital technology. Yung Jake came to prominence after releasing the music video Datamosh in 2011, a work where the artist deliberately applied glitches and pixelation to give the footage a hallucinogenic, dream-like effect. A year later he released the video E.m-bed.de/d, which somehow takes over the viewer’s browser to deliver a music video through an elaborate sequence of transitions between pop-ups that open, close, expand and flicker. Although several of his works are developed entirely for the internet, some pieces by Yung Jake are sculptural or designed to hang on a wall. In a recent series of sculptures, the artist combines prints of popular video-game and cartoon characters with scrap metal, spray paint, stickers, tape, ink, monitors and handwritten text. Another popular body of work is comprised by portraits of celebrities—such as Kim Kardashian, David Bowie, Anthony Bourdain and many others—made entirely out of emojis. Beyond their overt relationship to the hustle and bustle of social media, in the words of the artist: “when things are iconic/famous it's safe to assume most people have a relationship with that thing so it fills an object with energy in a way.”
Biography
Yung Jake
Born 1990
Details
4:20 minutes
KADIST VIDEO LIBRARY
Login to watch video
Related