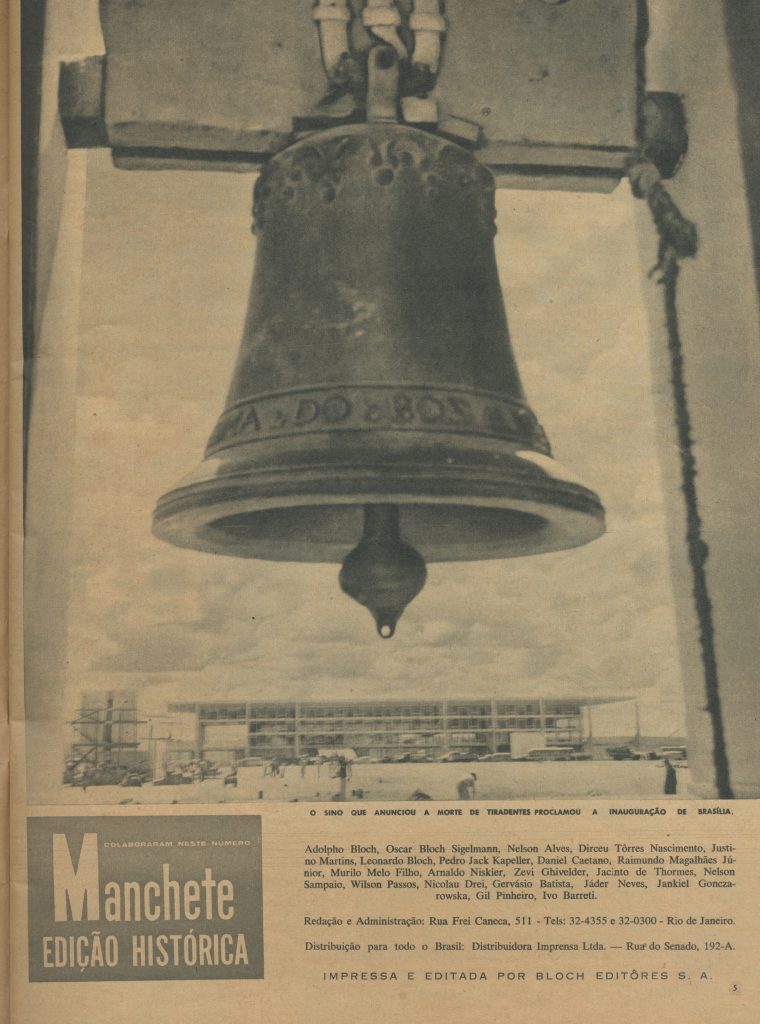 De sino à sina (From Bell to Fate) by Carla Zaccagnini references the execution of José da Silva Xavier (1746-1792). Also known as “Tiradentes”, a dentist and military officer, he was one of the twelve people from Ouro Prieto, in the region of Minas Gerais, who lead the first Brazilian attempt to gain independence from Portugal. Their revolt became known as the movement of the Inconfidentes. Accused of conspiring against the Portuguese Crown, “Tiradentes” was sentenced to the gallows and deprived of his Christian rights, which included burial and the tolling of a bell. He was dismembered instead, and rumor has it that, despite the interdiction, the bell of the Capela de Nossa Senhora do Rosario dos Homens Brancos in Ouro Prieto tolled. In a symbolic political move, that very same bell would sound years later, in 1960, during the inauguration of Brasilia, the futurist capital of Brazil, turning “Tiradentes”, the conspirator, into a national hero.

De sino à sina alludes to the evolution of the figures of the slave, the traitor and the martyr in the formation of Brazilian history and the construction of the nation’s identity. Zaccagnini explores the influences of African culture that permeated the country with the slave trade, and speculates about the way they have infiltrated its white Christian counterpart as a form of resistance. The work responds to the need to create a ritual atmosphere that is not necessarily religious, but that still generates a sense of community; it responds to the necessity of imagining a cultural expanse on which to inscribe the sounds of a bell so that their cross-references interweave the scattered narratives in which official history appears as a footnote.

Carla Zaccagnini combines historical research with a variety of media and techniques. From drawing to installation, performance, text, video, exhibition curating, and written criticism, Zaccagnini investigates cultural exchange and social displacement, as well as the transformation of the symbolic value of images in contemporary culture. Zaccagnini views these multiple activities as mutually constitutive forms of inquiry that overlap to form a holistic, conceptually driven art practice. Often working by recontextualizing existing objects and ideas, she prompts viewers to question the limitations of language and representation, the fallibility of perception, and the construction of knowledge. Zaccagnini is part of a generation of Latin American artists that have addressed the political history of the continent and, more specifically but not exclusively, the history of Brazil. Having delved into the history of slavery, the influence of European aesthetics in Brazilian art, and its assimilation by indigenous cultures, Zaccagnini uses art as a conceptual instrument to undo the construction of history and the production of knowledge.
Biography
Carla Zaccagnini
Born 1973, Argentina
Lives in São Paulo, Brazil
Details
5:20 minutes, loop
Sound piece - 5.1 sound installation record of the bell of Nossa Senhora do Rosario dos homers broncos, chapel in Our Preto (MG), Brazil and artist text
Related