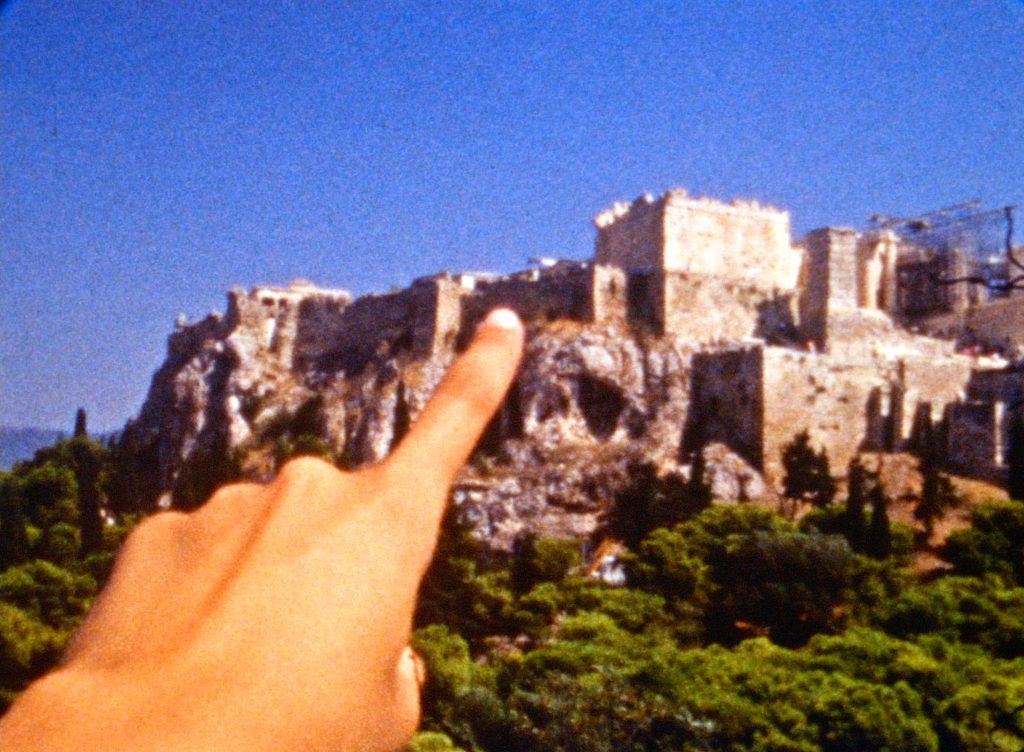 Deep Sleep draws from historical avant-garde cinema to produce a poetic, sound-based meditation following brainwave-generating binaural beats. The dreamlike video is filmed among abandoned ruins in Malta, Athens, and Gaza, connecting the three locations in an attempt to convey the experience of being in Gaza from these monumental sites. Colorful flickering lights, sun, earth, stone, rock, sky, and water inundate the scenes, and the rhythmic sounds of waves, chimes, and footsteps remain. Restricted from visiting Gaza for a period, Basma Alsharif practiced self-hypnosis in an attempt to locate herself in several places at once and filmed this work while in a trance state. Appearing in the video as her own double, dressed in all-white, she walks through unidentifiable ruins, holding a recording device. The artist points to various details in a scene, her finger filling the frame, urging us to take a closer look. The meditative shots coax the viewer into the rhythmic flow of the film where time and temporalities, borders and distinguishable geographies collapse into one another. Here, Gaza is called upon, reinvented through the lens of the artist’s personal relationship to Palestine. The film is what the artist calls an “invitation to move from the corporeal self to the cinema space in a collective act of bi-location that transcends the limits of geographical borders and plays with the fallibility of memory.

Basma Alsharif is an artist and filmmaker of Palestinian origin, born in Kuwait, and raised between France, the US and the Gaza Strip. She developed her practice nomadically between Chicago, Cairo, Beirut, Sharjah, Amman, the Gaza Strip and Paris, and her personal experience is reflected in her work, which she defines as presenting a non-geographically based subjective viewpoint. Her practice sits at the intersection of cinema and installation and focuses upon the human condition as it relates to various landscapes, environments and geographies. According to critic Suzy Halajian, Alsharif’s videos “evoke a longing for a home that might never be resolved or might have never existed.” Her works attempt to find understanding amid complex places, overdetermined by political upheaval, as a means of trying to imagine various ways of existing in such spaces. She uses a film format in order to create immersive narratives and enfold the audience into her process of seeing the world through a different lens.
Biography
Basma Alsharif
Born 1983
Lives in Cairo
Details
12min 37sec
HD transfer from super 8mm film
Related