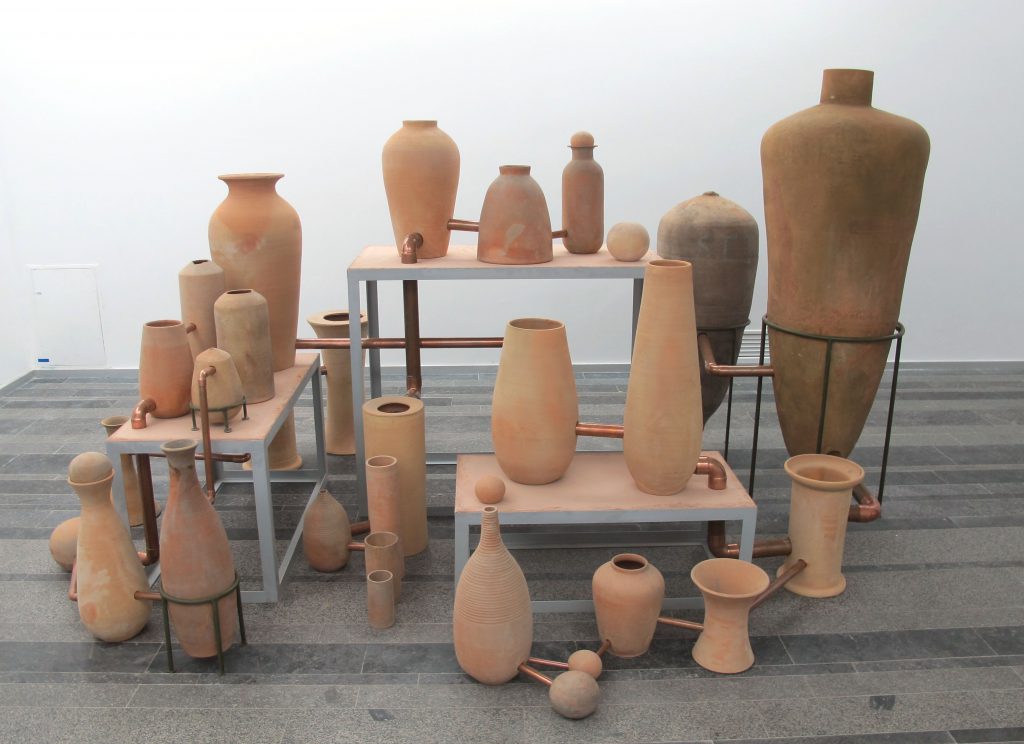 Destilaciones (Distillations, 2014) is an installation composed of a group of ceramic pots, presented on the floor and within a steel structure. Copper pipes run through the perforated ceramics, evoking the design of an oil purifier. The work is a direct reference to the history of the Peruvian coastal town of Lobitos. The extraction of oil began in Lobitos at the start of the twentieth century, with the arrival of the British oil company Lobitos Oilfields Limited. The infrastructure built alongside the plant included a desalination plant (now defunct), a church, a casino, and a cinema (one of the first in Latin America), all now in ruins. Following a 1968 military coup, the Peruvian government initiated a program of nationalization and the oil fields fell under the control of the state. The Ministry of Defence built a military base on the adjacent land. Soon, a slow decline due to mismanagement sent the town into economic collapse, mirroring the economy nationally. Today one encounters the ruins of buildings left by the British oil company; the debris of what used to be the old military base; and the traffic of surfers that come every year in search of waves. Currently, the oil extraction is concessioned to South American Petroleum Exploration Tech (Sapet), a transnational company funded mainly with Chinese capital. There is also a major investment plan to privatize the town, proposing a transformation of Lobitos into a tourist resort. Destilaciones portrays these different waves of colonialism and the exercise of authoritarian power within the context of a developing country. By tracing economic and political cycles, the artist intends to register the residue of human activity within the landscape. Environmental and social issues are presented in relation to the modern exploitation of resources and localized ancient practices such as fishing and pottery. The three epochs of political domination that have left their mark on Lobitos—European colonialism, the nation-state autonomy, and neoliberal globalization—have all left behind remnants of their failure.

Ximena Garrido-Lecca examines the turbulent history of Peru, and specifically how neocolonial standards are transmitted through the processes of globalization. The artist approaches her works by scrutinizing urban, rural, and vernacular architecture, concentrating on spaces where a mediatory materiality is visible between the specific and the universal. Equally important is the memory of artisanal tradition and the abandonment of rural spaces as an aftereffect of the processes of modernization. Her work insinuates a permanent tension between the inheritance of vernacular culture and the new demands of industrialization, signaling the violence contained in an accelerated transnational economic model in increasingly open confrontation with the protection of the environment, sovereignty, and respect for different community lifestyles.
Biography
Ximena Garrido Lecca
Born 1980, Peru
Related