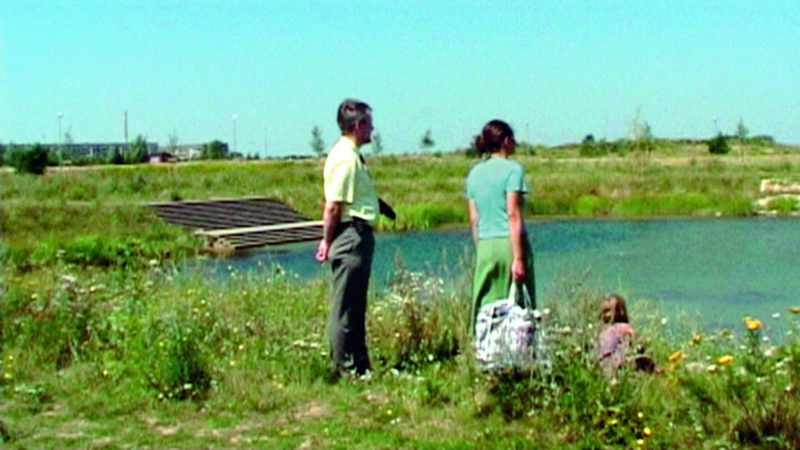 Die Siedlung is a filmic documentary about the recent shift in housing developments in Leipzig-Grünau in former East Germany and its consequences on some inhabitants. It complements von Wedemeyer slightly earlier and more artistic film Silberhöhe (2003) which decried imposed Modernist living model. In Die Siedlung, a voiceover describes and criticizes the different sites on view while the camera moves slowly past a vast abandoned 1930s Nazi army barracks which has yet to be converted or demolished, the building site and wastelands for the new private single family housing area, a constructed pond and finally the 1960s or 70s communal blocks of flats. An estate agent is recorded introducing the newer building site and its future plans in rather deadpan and unconvincing terms, according to him the Bauhaus concept has met resistance from the majority of buyers. A cynical jobseeker expresses his disgust faced with the notion of private property in an interview. The short piece quietly but efficiently denounces the blind pressures of “social reconditioning”. Von Wedemeyer’s work borrows from cinematic or documentary conventions (alike or separately) to analyze architecture as well as urban planning and their impact on behavior with great acuity.

Clemens Von Wedemeyer is certainly one of the artists of his generation that make intelligible our relationship to reality through the use of different transmissions of images, whether through film or video. The artist employs the documentary genre as a method in his analysis of reality. However, his use of fiction gives us the opportunity to examine different images. Referencing the work of Antonioni with "Silberhöhe", he puts us in a genealogy of directors who have also questioned the complex relationship between fiction and reality. If the video "Silberhöhe" gives us clues to understanding some aspects of reality, the poetic dimension of the artifices of fiction offer more complex visions of the world.
Clemens Von Wedemeyer was born in 1974 in Göttingen, Germany. He lives and works in Berlin.