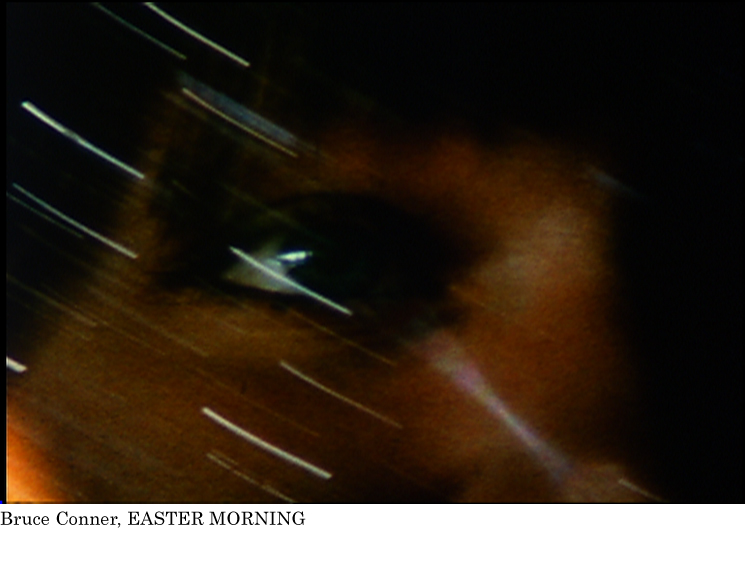 Unlike many of his earlier films which often present poignant critiques of mass media and its deleterious effects on American culture, EASTER MORNING, Conner’s final video work before his death in 2008, constitutes a far more meditative filmic essay in which a limited amount of images turn into compelling, almost hypnotic visual experience. The video presents us with a reinterpretation of footage from his unreleased avant-garde film, Easter Morning Raga, from 1966. In contrast to his more famous pieces like A Movie (1958) and Crossroads (1976) which are juxtapositions of fragments from newsreels, soft-core pornography, and B movies, the images in EASTER MORNING serve as a reinterpretation of footage. Here the artist expands the images in duration, gauge, and frame rate, which results in an enigmatic visual transcendence, or “imagelessness,” and distances the viewers from their preconceptions of what they are watching. Accompanied by rhythmical music, the collision of images in EASTER MORNING is not only testament to Conner’s ability to balance order and chaos, control and chance, but further reveals his abiding interest in alternative ways of seeing and experiencing.

Bruce Conner was undoubtedly one of the key figures of America’s avant-garde art scene since his work emerged in the late 1950s. Affiliated with the beat community, he was overtly opposed to the academic establishment and worked freely in a variety of media, including drawing, sculpture, painting, collage, photography, and assemblage. However, Conner is most recognized for his films in which he created a unique visual montage through the skillful and pioneering editing of found footage.