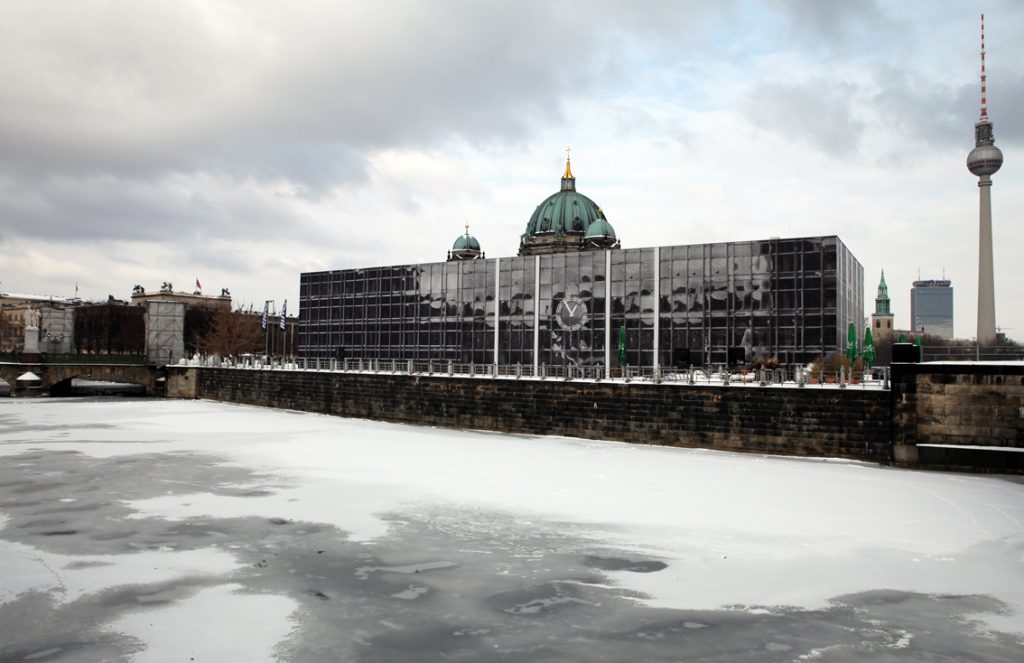 For Bettina Poutsttchi’s large-format, site-specific photographic work Echo (2009–10), the four exterior walls of the Temporäre Kunsthalle Berlin were covered with a digitally edited collage of archival images of the glass-and-steel facade of the Palast der Republik (Palace of the Republic), which had once been located nearby. That milestone of late East European modernism was completed in 1976. It served as the seat for the Volkskammer—the parliament of the German Democratic Republic (GDR). After the fall of the Berlin Wall, the building lost its political purpose and was used for cultural initiatives. After a long political discussion, the building was demolished in 2009 to make room for the reconstruction of Berlin’s eighteenth-century Stadtschloss (City castle). With the aid of photography, Bettina Pousttchi rebuilt the Palace of the Republic, the historically important building in the immediate vicinity of the demolition site, thus raising questions of the eternal cycle of catastrophe, destruction, and reconstruction in Berlin.  Echo is a photographic work of an altered reality that is implemented in public space. The series of twenty-four color photographs was taken during the six-month presentation of Echo, offering a diverse portrait of this installation in the middle of the iconic buildings that surround it. With Echo, the artist altered the physical reality of the Berlin Schlossplatz through photographic means. By photographing it, she achieves another reality that crosses between architecture, sculpture, and photography in a very exciting way. A selection of the Echo photos were shown in her solo show at the Kunsthalle Basel in 2011. The proposal is to purchase a pair of photos showing the building at different times of the year and looking in different directions evoking different aspects of temporality and politics through the seasons and architecture.

In recent years Bettina Pousttchi's work has dealt with themes related to memory, time and history and she is particularly interested in the consequences of the fall of the Berlin Wall. She makes sculpture, frequently made from crowd control barriers, video installations and photographs. She describes her work as coming out of photography. She also has an strong interest in architecture and its historical consequences. She was born in 1971 and studied in Dusseldorf under Rosemarie Trockel and Gerhard Merz. Like Amy Siegel, Pousttchi explores the relationship of Berlin’s Cold War past to its present in revealing ways.
Bettina Pousttchi is an artist based in Berlin of German-Iranian origin.