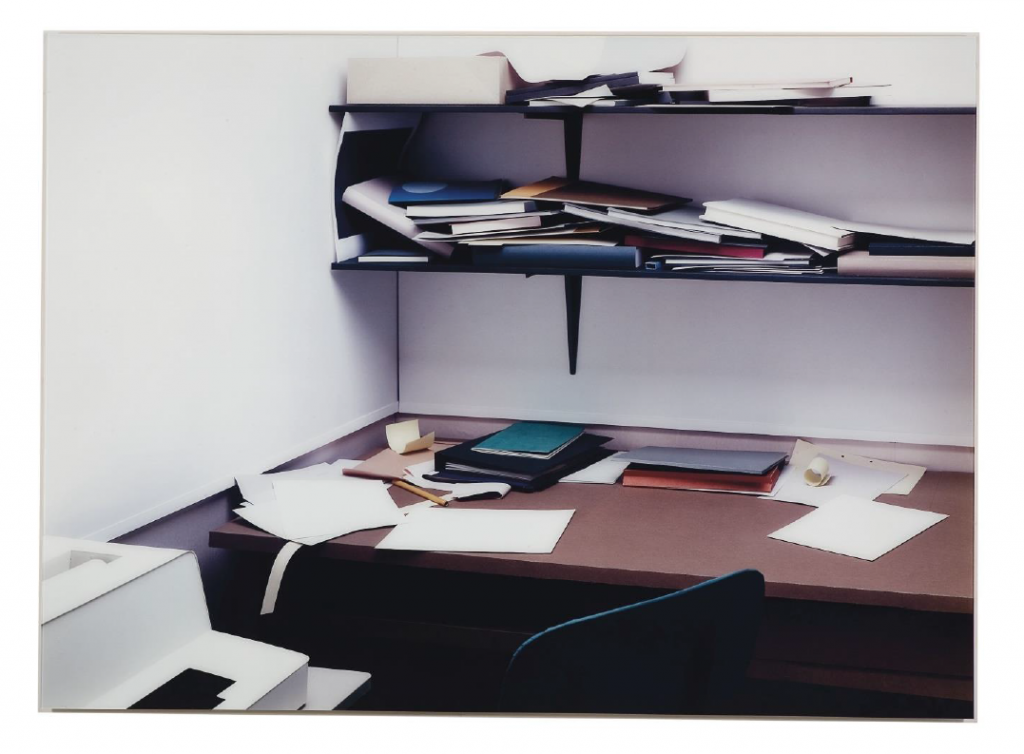 Ecke (Angolo/Corner) is a clear example of Thomas Demand’s conscious use of ambiguity. The scene depicted is a corner in what appears to be an office space, perhaps abandoned after some kind of natural disaster or neglected in the midst of a fast-paced presidential campaign. Documents, folders, and scraps of paper are scattered over a couple of shelves and on top of a desk, with an office chair and a printer visible in the edge of the composition’s frame. The generic is here rendered both unspectacular and uncanny.

The incertitude of the scene is augmented by the lack of text in all the folders and documents. This strategy—together with a lack of any human figures and use of flat and un-textured surfaces—is consistently used by Demand as a way to break with the illusion and leave the viewer clues that reveal the true nature of his paper and cardboard constructions.

A scene from the news, a moment captured in a magazine, a postcard or a film… For German artist Thomas Demand it all begins with an image. After he identifies an imagethat spikes his interest, he painstakingly replicates elements of it—often architectural spaces or ubiquitous objects in the background—in life-sized models made frommaterials such as paper and cardboard. He then photographs the models and subsequently destroys them, making the photographs the last remaining trace.   Demand was originally trained as a sculptor and initially used photography solely as a means to document his work, but in the early nineties his focus shifted towards the photographic image, in part due to his interest in the philosophical nuances inherent in capturing ‘the truth.’   While some of his photographs depict seemingly ordinary spaces and objects, others depict locations imbued with certain history and social and political meanings—such assites that relate to the attacks perpetrated by the far-left militant organization Baader-Meinhof (a.k.a. Red Army Faction) in the 70s, Saddam Hussein’s hideout during the 2003 Iraq invasion, and even the Oval Office in the White House. This ambiguity places the viewer in a dilemma where the images are often seem reminiscent of a scene previously viewed. The result is a lingering mystery: have we seen this before?   This interplay between fiction and reality is an essential part of Demand’s work; drawing from the ordinary and the eerily familiar to invite the viewer to reflect on the mediated truth and constructed experience we are subject to through the saturation of mass media.
Biography
Thomas Demand
Born 1964, Germany
Details
56 11/16 x 78 3/4 in
C-print
Related