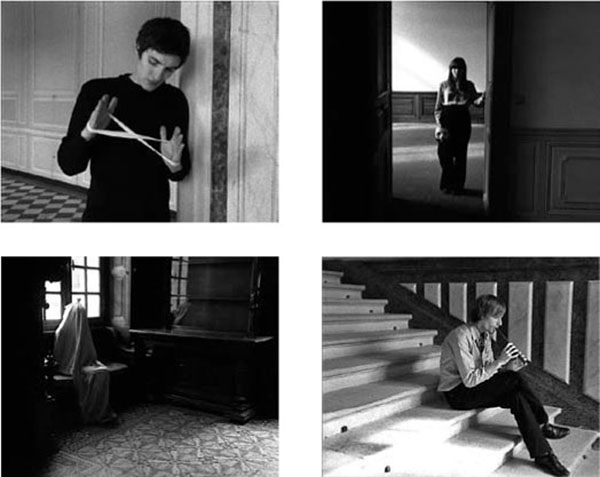 Eight opens with a close up of a painting by Hubert Robert of the Chateau de Chamarande where the film was shot. This work  acts as a key to the unfolding film. In Eight, the camera tracks back and forth, proceeding from room to room, closing in on each motif, lingering and then passing on without ‘comment’, as a surrogate for the spectator’s gaze. Each tableau vivant that the camera/viewer encounters recalls some other cultural manifestation: Greek theatre in the mask, Magritte perhaps in the woman with no face, Caspar David Friedrich in the woman gazing out of the window, Greuze in the death scene observed by spectators (but also perhaps 19 century medical demonstrations to students) etc. Many of these motifs recur in von Brandenburg’s work so there is also a sense of self-reference. The film enshrines ambiguity; are these people alive or dead, animate or inanimate wax works? Only the paper that inflates and deflates indicates a living presence. This is the only motif that engages with the cinematic. Everything else is photographic and theatrical. Just as the film is destined to loop eternally (evoked by the moebius strip) so the figures seem to be frozen forever in their poses. However, part of the disquiet occurs in the gap between what we know and what we don’t know. Once the camera has passed do the figures come to life? Before the camera reaches them are they animate? The spectator is caught between worlds, between the conscious and the unconscious, the knowing and not knowing, in a timeless world staged for his inspection.