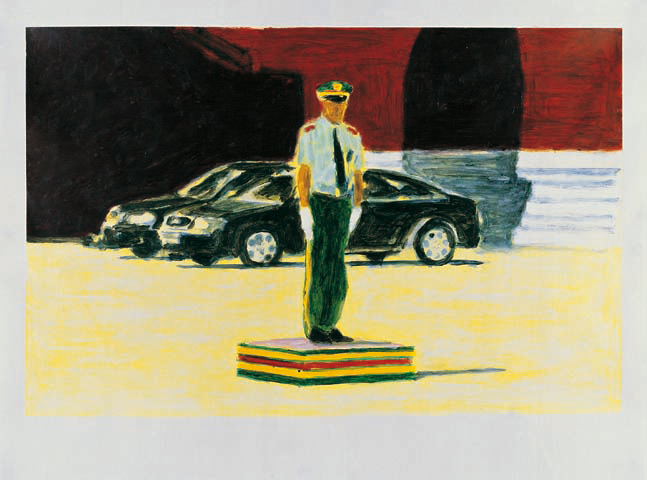 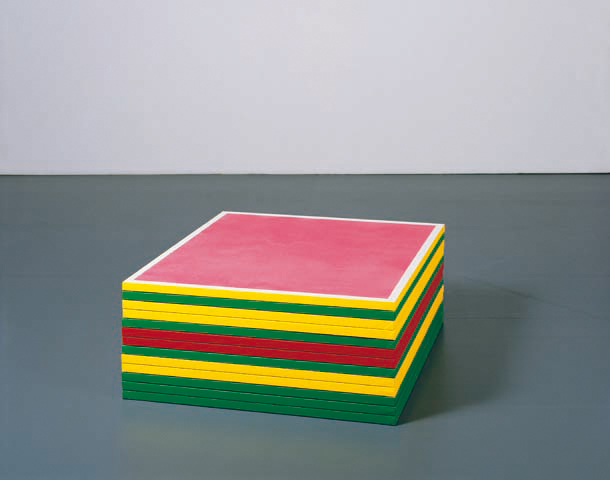 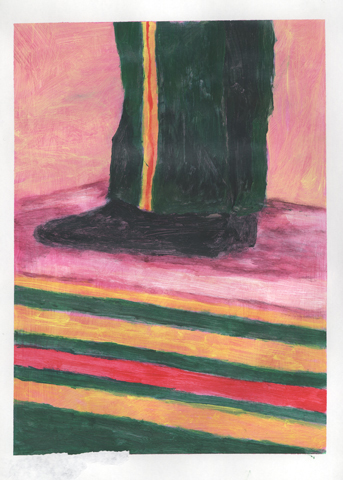 En Guard Souvenir is composed of a group of eleven elements (ten paintings on paper and a sculpture) which deconstructs and recomposes the context of Tienanmen Square in Beijing. This square is known for numerous political events : the cultural revolution between 1966 and 1976, the arrest of the Gang of Four and protests in 1989 where thousands of demonstrators who were protesting against the corruption of the regime were killed. In this work, Bruno Pacheco alludes to the historical importance of this place, the choice of viewpoints reveals very precise but sporadic details there : part of the mausoleum devoted to Mao, a portrait of him and its frame, a view overlooking the Forbidden City, etc. On the square, two guards stand on their platform, facing each other, executing their rituals. The installation leads one to think about various angles of approach within a historical discontinuity.
With a certain spontaneity, Bruno Pacheco crystallizes the gestures of the characters (guards) in his paintings. The different viewpoints are organized in order to construct a rhythmic visual narration. The sculpture is to be perceived at the centre point of the installation, it is the platform also found in the paintings though this one is empty, figuring the absence for the guard and require the public’s projection in order to understand the participation of this object within the installation. The artist’s cinematographic approach places an emphasis on form, frame and color in order to open a dialogue about the deconstruction of this site through this sequential and fragmentary mode. The worrying distance which is created develops a distinct form which alludes to the unfathomable chasm between memory and reality, private and public space. This work reveals the artist’s political commitment and his interrogation regarding the individual within the collective.