Tuan Andrew Nguyen
Enemy’s Enemy: A Monument To A Monument 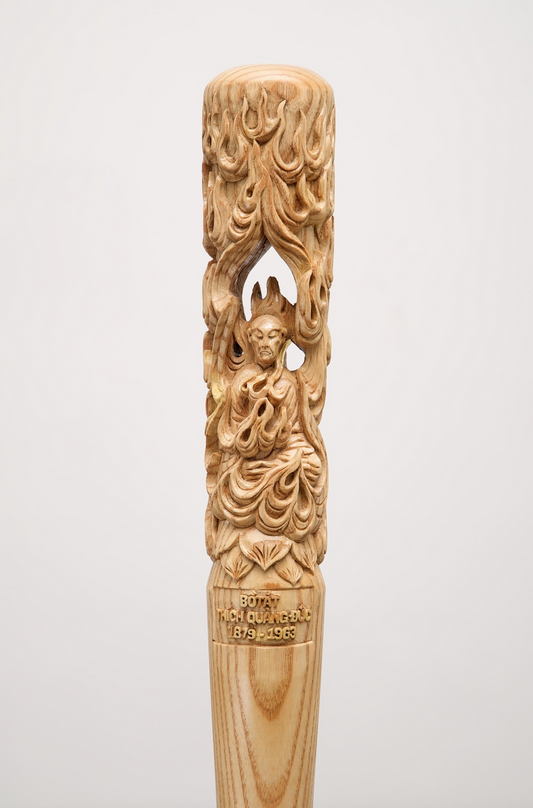 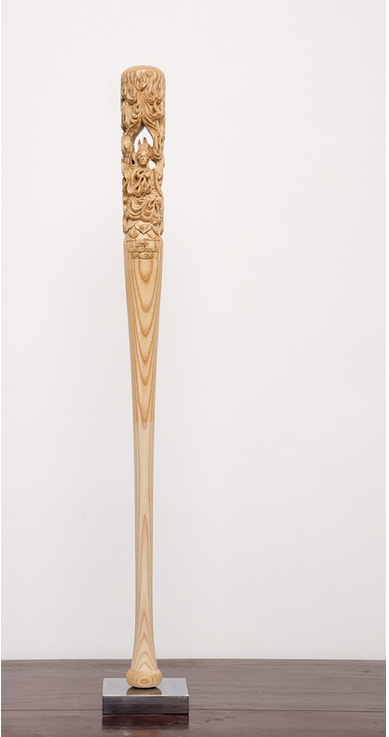 This work presents the image of an immolated monk engraved on a baseball bat. The flames surround him eroding the extremity of the bat. The delicate sculpture refers to the sacrifice of the Buddhist monk, Thich Quang Duc, who immolated himself on June 16th 1963, in reaction to the discrimination and the repressive politics of the Diem Catholic regime (regime installed by the Americans) towards the Buddhists. Ironically a memorial was built where the sacrifice took place in Hô Chi Minh-City, despite the fact that under Communism, religion was incompatible with the desire to transform social class. The artwork recalls the shape of the monument; a monument to a monument.
By acknowledging this historical action on a famous national site, one can witness the Vietnamese communist government sympathizing somehow with the victims of the American ‘puppet’ Diem, despite its security policy which guaranteed most of the time an equally repressive behavior.
The representation of this act on a sports accessory, which is supposed to symbolize America and its different social classes, is a way to recall that this popular game reveals social and political behavior. Baseball is considered like a national sport in the United States and Louisville Slugger is one of the most famous brands in the history of baseball. In some ways, it could be considered as a sacrilege to carve such a symbolic national item, that represents power but also violence.
The social symbol carried by baseball and the hypocritical act of building a memorial monument in tribute to this monk, both come from different contexts but are, however, used in favor of political contingency. Religion and sport are social occasions for community gatherings, but may also provoke conflict and violence.