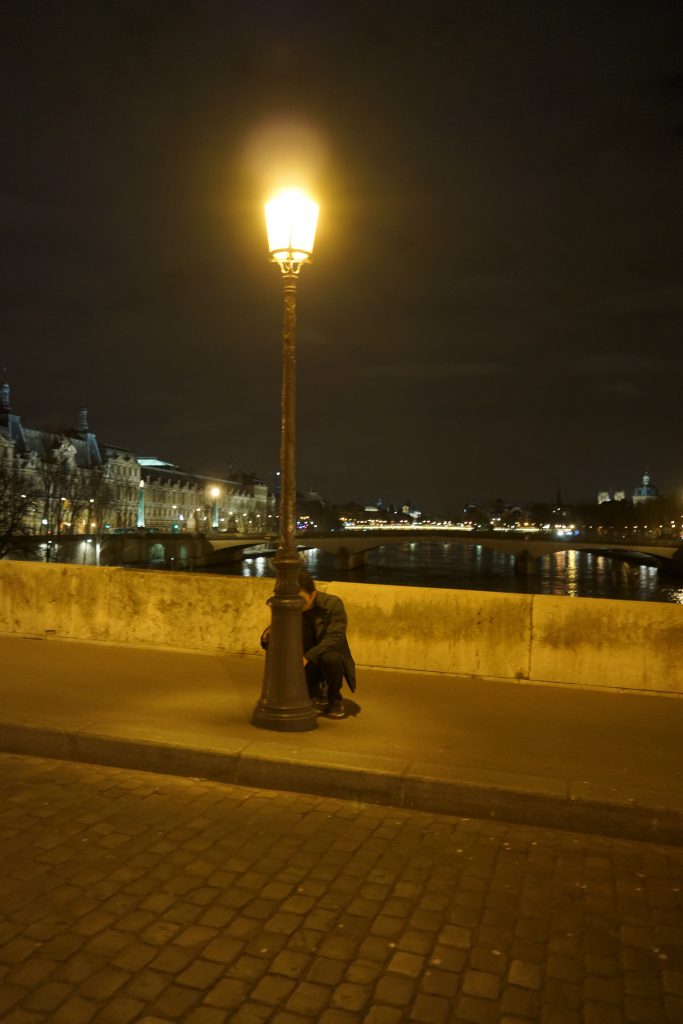 The title of the work Eridanus refers to the constellation of the river of ancient Athens that meanders across in the night sky. The constellation is visible uniquely from the Southern Hemisphere. The artist evokes a story from the past, where with the installation of modern street lamps, has resulted in the residents of Paris being disturbed by the difficulty of seeing the stars in the sky as a result of light pollution.* Horvitz decided to restore a view of the stars in Paris by reducing the artificial light. In the process of realization, he crossed Paris on foot during the night, and transposed the constellation Eridanus on the map of the city. The artist extinguished a lamppost at each point representing the thirty stars of the constellation. At each point, the artist produced two photos—one with the light on and the artist visible, and one with the light off. The artist both procured and made keys that opened the control access panels for the streetlights, and simply turned off the switch. A few days later, the city had turned on the lights again. For an unknown duration, but for at least one night, an inverted constellation appeared in the city of Paris. A constellation, not of light, but of darkness, which in turn, resulted in some spots where the stars might, once again, be visible in the night sky. The artist began at 8 pm in Montrouge to finish at the Allen Gallery (the last lamppost being above the gallery) at 5am, the night of March 19, 2017. As the announcement for the exhibition, along with a card listing dates and location, Horvitz mailed copies of the keys, that enable one to open and turn off the street lamps, to the gallery’s mailing list.
*The artist later pointed out that this is only half true, that Parisians were also concerned with resisting the authority that imposed an end to dark corners of the city, ending the “visual  obscurity of shadows in the night.” Horvitz continues, “the streets, like everything else outside were once aligned with the rhythm of the sun and the moon’s light. When the sun set, the visible was allowed to rest, and in a sense, to dream. The light of a lamp makes visible only what is right in front of us. What is lost is a kind of cosmic distance. A night filled with stars evoking a time far beyond the human scale.”

Although the practice plays a central role in the work of David Horvitz, his work is at the opposite of fine art objects. The conceptual work of the artist employs various mediums necessary for each intervention; yet, performance, the idea of the game and the exchange with the public are central. The artist often uses newspapers, web pages, postcards as a means of exchange with his audience and memories of actions carried out around the world. The notion of time is important in the artist work – noting the influence of On Kawara – and the environment is apprehended as an interactive and virtual land art. His work, presented through modest media and exhibition, is poetic, generous not only in virtue but in practice – many works are freely downloadable on the web – with social resonance and great inventiveness
Biography
David Horvitz
Born 1980, USA
Lives in Los Angeles
Details
Photographs: 10.00 x 15.00 cm each, map: 49.00 x 63.50 cm
Digital slide show of 60 images, set of 60 photographs, map
KADIST VIDEO LIBRARY
Login to watch video
Related