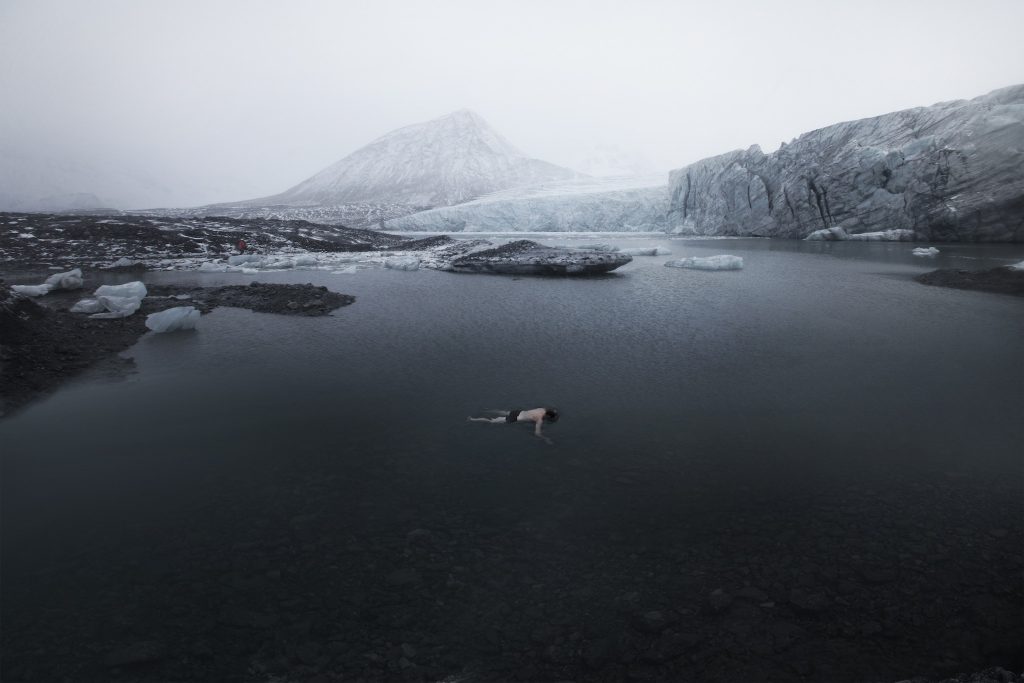 Expedition #46, from the series The Glacier Study Group

Expedition #46 is a work from the series “The Glacier Study Group,” which consists of artists, scientists, activists, and enthusiasts of glacial and polar activity in the Artic Circle to conduct scientific investigation, data collection, and glacier sampling. Recent media attention on global warming and climate change has driven interest in increased glacial activity. The group spends long period of each year in the harsh Arctic environment to acquire in-depth knowledge of these changes while experiencing the landscape firsthand. Expedition #46 presents voyeuristic images of human activity in expansive surreal glacial landscapes to elicit a sense of discovery in the viewer, who travels by-proxy via Zhao’s photographic series. The viewer is able to observe the Study Group’s journey in observing their environment and engage in critical reflection of the varying documentary spectatorship deployed in the visual discourse of environmentalism and scientific research.

Robert Zhao Renhui’s photographic prints question fact-based presentations of conservation and highlight the manner through which documentary, journalistic, or scientific reports sensationalize nature in order to elicit viewer sympathy. Zhao portrays human as figures curious about their natural environment, which is at times mysterious and unpredictable. Through observing human behavior in front of animals rather than that of the animals themselves, Zhao’s critical lens examines various modes of what he calls a “zoological gaze,” the manner through which humans view animals and nature. His works create visual ambiguity so the viewer becomes aware of assumptions made about the way images present facts. Zhao received a Bachelor of Fine Arts in photography at Caberwell College of Arts and a Masters degree at the London College of Communication, where he graduated with distinction.
Biography
Robert Zhao Renhui
Born 1983, Singapore
Related
Robert Zhao Renhui: Flies Prefer Yellow, San Francisco
An Evening with Robert Zhao Renhui, San Francisco
Robert Zhao Renhui, San Francisco